The Colorado River gets its start in Rocky Mountain National Park and flows through northwestern Colorado. Its watershed provides drinking and irrigation water for about 40 million people in the Southwest. (Photo by Nick Cote for KUNC/LightHawk)

GREELEY, Colo. – A new federal program aims to fill in knowledge gaps on how water moves through the headwaters of arguably the West’s most important source of drinking and irrigation water.

The U.S. Geological Survey announced the second location for its Next Generation Water Observing System will be in the headwaters of the Colorado and Gunnison rivers, near the Continental Divide. The pilot program, on the Delaware River Basin, started last year.

The new observing station will give researchers and decision-makers an in-depth, real-time look at conditions within the upper reaches of the Colorado and Gunnison rivers. The two basins are adjacent to each other and cover a broad swathe of western Colorado. The Gunnison and the Colorado join near Grand Junction.

The monitoring system uses a network of sensors and cameras – even drones – to give scientists the clearest picture of how the river starts high in the Rocky Mountains.

When fully implemented, said Chad Wagner, who oversees the program for Geological Survey, the monitoring system will provide high-quality data on streamflow, evaporation, water storage in snowpack, soil moisture and groundwater. It then will feed that data to existing models that are “data-starved” in some regions, Wagner said. 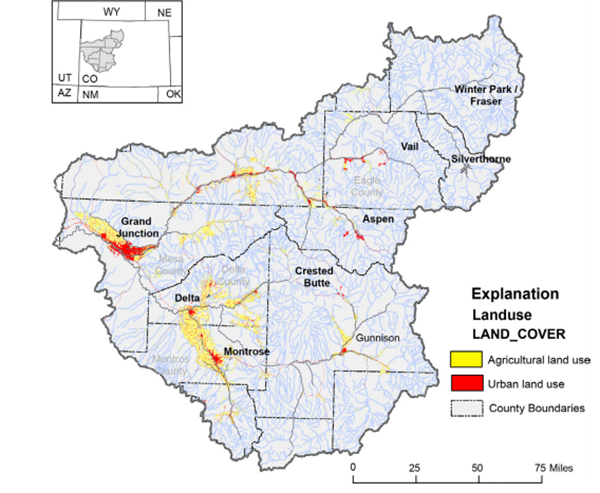 The U.S. Geological Survey has selected the headwaters for the Colorado and Gunnison rivers for a new scientific monitoring program that began last year with a similar system on the Delaware River, whose headwaters are in the Catskill Mountains of New York. (Graphic courtesy of U.S. Geological Service)

The program will also fly drones equipped with cameras to gather data on reaches of the river that aren’t currently monitored.

“The cameras are not just for imagery,” Wagner said, “but cameras that can measure stream velocity, that can measure ground-penetrating radar so we can get depths of the stream bed. We can get below the streambed to look at groundwater interaction with streamflow.”

Observations within the Colorado and Gunnison river headwaters also can be used to inform decisions in other, smaller snow-fed basins in the West, Wagner said.

“Nearly all of the flow of the Colorado River originates in the Upper Basin states, and runoff from the headwaters and the Gunnison River Basin is really nearly three times that of other basins in the area, so it’s a particularly critical basin for downstream users,” he said.

More than 40 million people in seven U.S. states and two Mexican states get their water from the Colorado River, which experts say is badly overallocated and threatened by population growth and longterm drought.

To expand to the Gunnison’s basin, the Next Generation Water Observing Station is asking Congress for an initial $7.8 million investment, and an annual appropriation of $4.5 million to operate the program. The Geological Service plans to set the monitoring program in 10 medium-size watersheds.

This story is part of a project covering the Colorado River, produced by KUNC and supported through a Walton Family Foundation grant. The project is solely responsible for its editorial content.