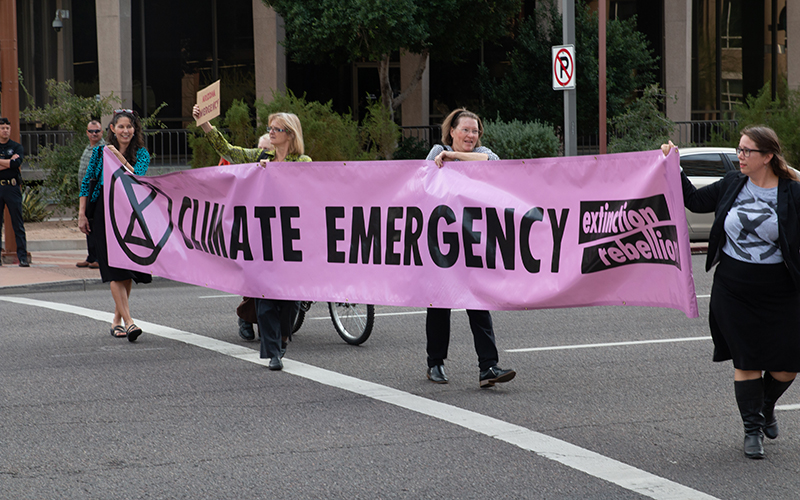 Climate activists hoist a banner declaring a climate emergency as they cross Washington Street in downtown Phoenix on Friday, Dec. 6. The activists joined others for a protest outside City Hall. (Photo by Jake Eldridge/Cronkite News) 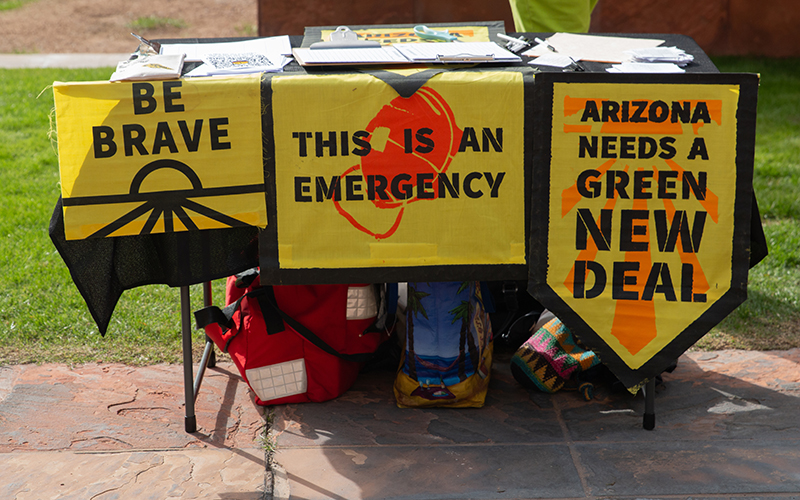 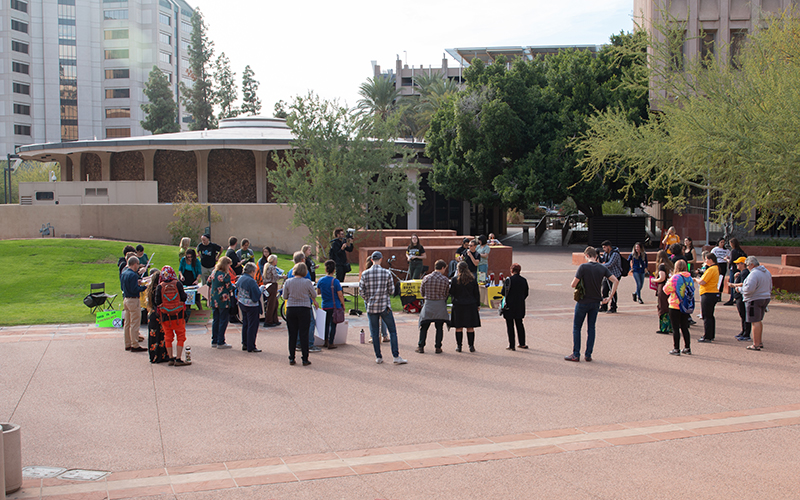 Climate change protesters gathered in Phoenix and other communities across Arizona on Friday, continuing the #FridaysforFuture climate strikes. (Photo by Jake Eldridge/Cronkite News)

After a global climate strike in September, local group AZ Youth Climate Strike sought to keep the momentum. In the absence of meaningful state, national and international action, Friday’s protest at Phoenix City Hall was meant to pressure officials of Arizona cities and towns to declare a climate emergency.

Aditi Narayanan, 17, a senior at Basis Phoenix Central charter school, led a few dozen protesters on West Washington Street. Organizers set up booths with such slogans as “Arizona Needs a Green New Deal” and “This Is an Emergency.” 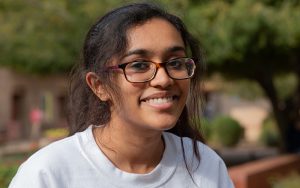 “This strike is intended to stress the need for more city action as opposed to state action,” says Aditi Narayanan, who led Friday’s protest at Phoenix City Hall. (Photo by Jake Eldridge/Cronkite News)

“This strike is intended to stress the need for more city action as opposed to state action,” Narayanan said. “One thing we want is for all cities to declare a climate emergency and have a climate action plan. Phoenix’s is lacking. It’s very outdated, from 2007. We’re asking them to update it to include new demands and needs because the city has changed.

“This is focused on very specific policies, the climate action plan and other ordinances. In terms of laws being passed, more needs to be done.”

The protests came in the wake of the Trump administration’s announcement Nov. 4 that the U.S. has begun the yearlong process to officially withdraw from the Paris climate accord by next fall. The agreement’s long-term goal is to keep the increase in global average temperature below 35.6 degrees Fahrenheit compared with pre-industrial levels.

The U.S. remains the second-largest emitter of greenhouse gasses, behind China.

Daniela Figureroa marches in a climate strike rally on the ASU Tempe campus on Friday, Sept. 27, 2019. “I know that if I don’t fight for the better future, then nothing will happen. And being an individual, it feels like sometimes I can’t strike a change, but I know with all these people something has to happen," she said. (Photo by Delia Johnson/Cronkite News)

Students march across the ASU bridge in Tempe during a climate strike rally on Friday, Sept. 27, 2019. People all over the globe protested to lobby for environmental action. (Photo by Delia Johnson/Cronkite News)

Mads Alzamora marches in a climate strike rally on the ASU Tempe campus on Friday, Sept. 27, 2019. “This is our future, right," she said. "Stop treating the environment like it’s our wasteland.” (Photo by Delia Johnson/Cronkite News)

Students march in a climate strike rally on the ASU Tempe campus on Friday, Sept. 27, 2019. (Photo by Delia Johnson/Cronkite News)

Protesters in Los Angeles abandon the route mapped out for them and begin walking through traffic on September 20, 2019. (Photo by Erica Morris/Cronkite News)

Activists convene on the grounds of the Arizona Capitol of Friday, Sept. 20, 2019, where many young people spoke about climate change and other social and economic issues. (Photo by Annika Tomlin/Cronkite News)

Thousands gather in downtown Los Angeles' Pershing Square on Sept. 20, 2019, to protest the lack of action on legislation to address and deal with climate change. (Photo by Erica Morris/Cronkite News)

The United Nations is hosting the COP25 Climate Change Conference in Madrid through Dec. 13. Thunberg made an appearance there on Friday as part of the international protests.

“We are getting bigger and bigger, and our voices are being heard more and more, but of course that does not translate into political action,” Thunberg said. “I sincerely hope that world leaders, that the people in power, grasp the urgency of the climate crisis because right now it doesn’t seem like they are.”