‘He’ll be great down there’: Marvin Bagley likes brother Marcus’ commitment to ASU 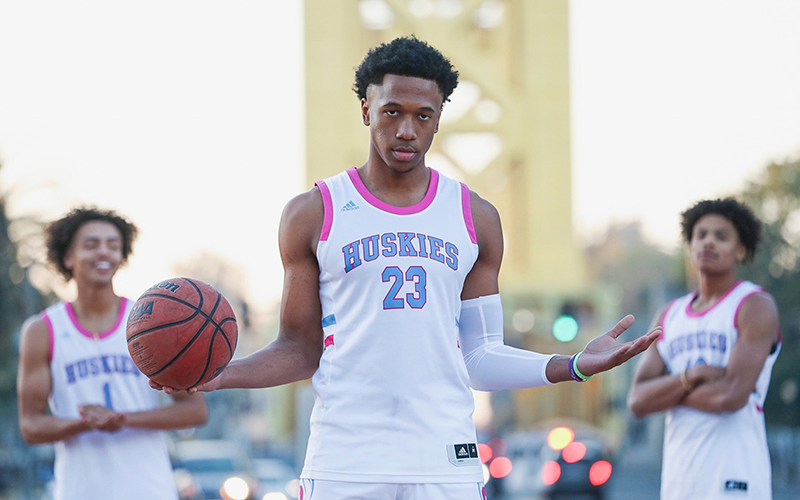 The decision by Valley standout Marcus Bagley (23) to commit to Arizona State has been well received by his brother, Marvin. Marcus now plays high school basketball in Sacramento to be near his brother, who plays for the Kings. (Photo courtesy of Marcus Bagley Twitter’s account)

TEMPE – Basketball is a family affair for the Bagleys, which made four-star small forward Marcus Bagley’s decision to join the Arizona State men’s basketball team in 2020 all the sweeter.

On Nov. 13, Bagley signed his national letter of intent to join coach Bobby Hurley’s program. It marks a return home for Bagley, who relocated to Northern California after the Sacramento Kings made his brother, Marvin Bagley III, the No. 2 overall pick in 2018. Marcus is a senior at Sheldon High School in Sacramento.

“I think he’ll be great down there,” Marvin said. “He obviously likes it a lot. There’s a lot of history there and he just thought it was the best fit for him.”

Marcus Bagley will follow in the footsteps of his grandfather, ASU legend Jumpin’ Joe Caldwell, whose No. 32 hangs in the Desert Financial Arena rafters as one of the most prolific two-way players in program history.

Caldwell set the bar high for his grandchildren by retiring as a decorated and respected player. He won a gold medal with the U.S. Olympic team in 1964 upon the completion of his three-year Sun Devil career. That launched an NBA career in which he garnered four All-Star selections and one All-NBA selection in six seasons before moving to the ABA.

Grandson Marvin was picked just one spot after the Phoenix Suns selected center DeAndre Ayton at No. 1 in 2018. He and Ayton established a relationship as teammates at Corona Del Sol High School in Tempe before moving to Hillcrest Prep, where Marcus and Marvin’s father, Marvin Jr., coached the team. Between basketball success and family history, the Bagleys have fond memories of Tempe.

“When I was here, it was amazing. We won a state championship my freshman year – we lost one game all year,” Marvin said. “My teammates are obviously doing big things now, so it was a great time, a great experience and something I’ll never forget.”

Hurley tried to lure Marvin to his program, but the hybrid forward/center opted to play under Hurley’s mentor at Duke, head coach Mike Krzyzewski. Linked by their former coach, Marvin and Hurley established their own relationship, spurring high expectations for his brother as a Sun Devil.

Listed by ESPN at 6-foot-7 and 220 pounds, Marcus shares some of the size and a lot of the athleticism of his older brother. He has a tremendous vertical leap and a wide array of moves to pave his way to the rim, often resulting in thunderous dunks and acrobatic layups. At 18, Bagley already projects to have high-upside physicality at both forward positions.

He hasn’t always been so physically imposing. Of all of the factors that Bagley brings to the table, his growth is what most enticed Hurley.

“Just the transformation that he’s made in a few years with his body and what he looks like physically – he’s got a great future ahead of him and I can’t wait to have him here,” Hurley said.

Alhough his athleticism draws the crowds, Bagley brings more to the table than his ability to jump out of the gym. He is a keen rebounder and has a reliable jump shot from mid-range and beyond. He has a high point of release and a quick trigger on his jumper, which helps him shoot with less chance of getting blocked or disrupted on closeouts.

This could bode well for him on a guard-dominant team like ASU that thrives on a healthy balance of cuts to the rim and outside shots.

It’s not easy to live up to family expectations, but Marcus has proven he is up for the challenge.

“His family has been under the microscope for a while and he’s played in the shadow of Marvin and has handled himself fantastic,” Hurley said.

Before he begins his collegiate career, Marcus has to take care of his senior year with the Sheldon High Huskies. Sheldon is off to a 4-0 start after winning the Battle Zone Championship 87-56 over the Santa Clarita Christian Cardinals. Bagley led the way with a dominant 28-point performance.

Although he has a long journey ahead of him, Marcus is breaking out and living up to his family name.