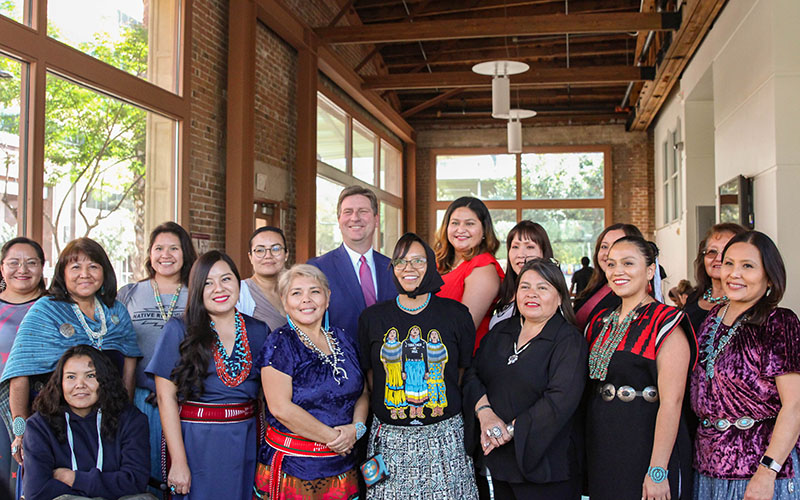 U.S. Rep. Greg Stanton, D-Phoenix, poses with the 16 most recent graduates of Project DreamCatcher, a partnership between the Freeport-McMoRan Foundation and the Thunderbird School of Global Management. Before their Nov. 22 graduation ceremony, Stanton spoke with the women about their businesses and plans. (Photo by Kalle Benallie/Cronkite News)

The program is the result of a partnership between the Freeport-McMoRan Foundation and the Thunderbird School of Global Management, which is part of Arizona State University.

Debra Yazzie learned about Project DreamCatcher in September, when two project alumna discussed it during a Navajo chapter meeting in Shiprock, New Mexico. Out of 30 women who attended that meeting, Yazzie said, she was the only one who filled out an application.

Yazzie added she always has been entrepreneurial, working on the side as a DJ for events and as a driver for the ride share company Lyft, but she wanted more. She knew she needed additional business skills to follow her financial dreams.

She signed on the dotted line.

“It was really insightful, invaluable information over the course of a week,” Yazzie said of Project DreamCatcher. “Being able to break it all down in steps and being able to know where would you even incorporate.”

Kellie Kreiser, founding executive director of Thunderbird for Good, said the program offers classes in learning how to give elevator pitches, financing and accounting, business plans, leadership and more. It also focuses on inviting Native American business owners and Native American women entrepreneurs as guest speakers to provide important information and resources for the women.

“You have to look through the lens of culture for any of these projects,” Kreiser said. 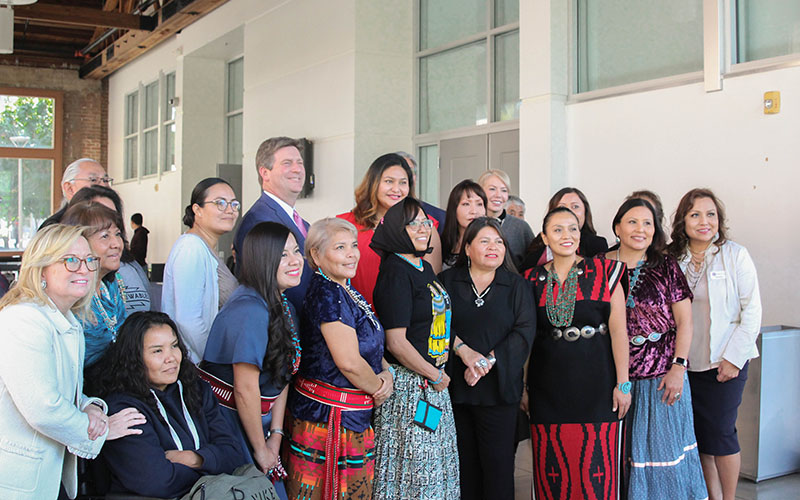 U.S. Rep. Greg Stanton says he was “struck by the caliber of the graduates ingenuity, authenticity” of the Project DreamCatcher graduates. (Photo by Kalle Benallie/Cronkite News)

Peter Denetclaw, manager of environmental programs and Navajo relations at Freeport-McMoRan, said this class was created as a way for Freeport-McMoRan to give back to the Navajo community. The company acquired another mining company, Phelps Dodge, in 2007. In doing so, it absorbed the liability Phelps Dodge incurred after it mined uranium on Navajo land. Phelps Dodge was found to be responsible for exposing Navajo mine workers and their families to radiation.

“Freeport now is responsible for the cleanup of those uranium mines on Navajo land, even though Freeport never did uranium mining,” Denetclaw said.

From 1944 to 1986, many Navajo people were exposed to radiation in water sources and houses located near the mines. Some of the potential health effects of radiation exposure include lung cancer, bone cancer and impaired kidney function.

In 2017, Freeport-McMoRan agreed to a settlement with the U.S. government and the Navajo Nation for their two subsidiaries, Cyprus Amax and Western Nuclear, to clean up 94 abandoned uranium mines on the reservation, according to the Environmental Protection Agency.

Their work with Thunderbird for Good is one way to target specific areas on the Navajo Nation that experienced uranium contamination. One of them includes Shiprock, New Mexico, the site of the chapter meeting Debra Yazzie attended.

“Mainly, where the clean-up work is happening, word and presentations were given at those chapters to let them know about the program and the eligibility,” Denetclaw said.

The week long program was conducted last month at Thunderbird’s downtown Phoenix campus. At the graduation ceremony, U.S. Rep. Greg Stanton, D-Phoenix, spoke with some of the graduates, admiring their drive and praising their dedication.

“Having met these talented entrepreneurs for just a little while before the ceremony,” he said, “I am struck by the caliber of the graduates ingenuity, authenticity.”

But the process wasn’t easy for many of the women. Some traveled from outside Phoenix, and Arizona, to participate.

Kreiser said Thunderbird for Good provides all the women with hotel rooms and food expenses. For many, it’s a rare opportunity to hone in on their professional goals.

“You get to focus on your business for that full week, you don’t have to worry about, ‘I’m going to the class during the day and got to go home and make sure dinner’s on the table,'” she said.

Yazzie said the program has also created a kinship, as participants supported each other through the process. Some of the women left their families for the first time to attend. Realizing that some are related through the Navajo clan system, a classification of the mothers, fathers, maternal grandfathers and paternal grandfathers origins, has helped ease the process.

“We were like sisters, bonding in that fashion,” she said, adding that their close relationships may result in future collaborations. 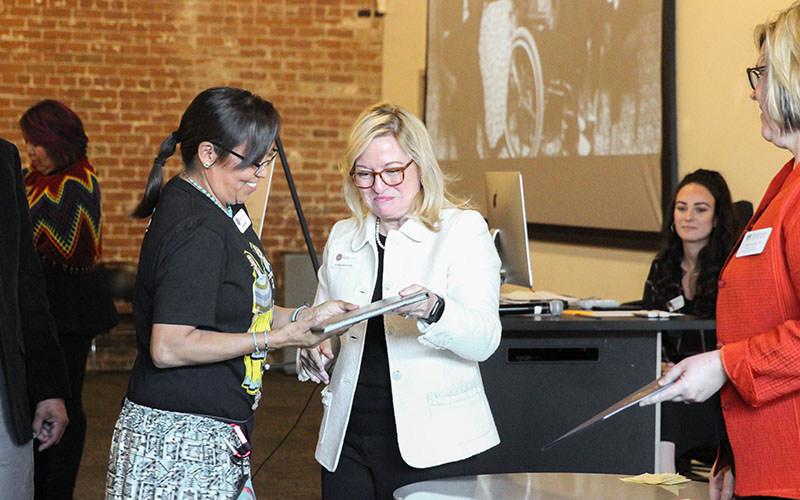 In October, Yazzie became an Airbnb host in Shiprock, using a trailer she previously had rented out. She quickly noticed the possibilities of hosting on the vast Navajo Nation Reservation.

“Right away,” she said, “we started getting requests from travelers in Shiprock that were coming through late and didn’t want to travel to Farmington, Cortez or Gallup.”

The rooms have no TV or internet access. Instead, guests find books about the Navajo Code Talkers, rez ball, trading posts and more.

“I know that a lot of people that do want to come and visit us, they want to experience the cultural side,” Yazzie said.

Yazzie has a five year plan to look into short-term leasing portable pods on the reservation, an idea, she said, that would never have been feasible before Project DreamCatcher.

But there are still several challenges ahead. Yazzie added it can take a considerable amount of time for the Navajo Nation to approve a new business. The application costs just $10, but it can take anywhere from six months to a year to be approved.

“They’re still in the age of shuffling papers, and I got on Airbnb and opened up the site within an hour,” Yazzie said. “You can’t do that with the Navajo Nation.”

Because of the slow process, Yazzie said some Navajo women entrepreneurs have looked outside the reservation to start their businesses. Thinking outside the box is one of the things Yazzie said they learned through the program.

That, and a healthy dose of courage to keep moving forward.

“I think there are some people that are going to take off and probably be the first millionaires going through this program, I can feel it,” said Yazzie, beaming. 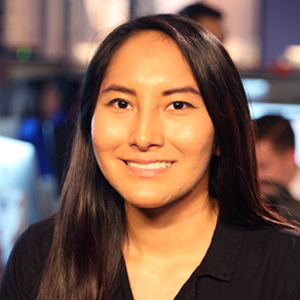