The eight-hour hearing included testimony from four constitutional scholars on whether they believe Trump’s actions warranted an impeachment under the Constitution.

Democrats repeatedly invoked the Constitution and set up softball questions for the panel of scholars, while Republicans challenged those same law professors and argued that there was nothing in the Democratic charges that rose to the level of an impeachable offense.

Arizona lawmakers on the panel followed suit, with Rep. Greg Stanton, D-Phoenix, invoking the historical importance of the moment and GOP Reps. Andy Biggs of Gilbert and Debbie Lesko of Peoria criticizing the whole process.

“What I’m suggesting to you today is a reckless bias coming in here, not fact witnesses,” Biggs said to the witnesses, after reading out their past campaign donations and snippets of news stories in which they have been quoted about impeachment.

“You’re supposed to be talking about what the law is, but you came in with a preconceived notion and bias,” Biggs said.

But Stanton said the most important question for every member of the committee is whether “we are a nation of laws and not men.”

“The obstruction we’re looking at today is far worse than President Nixon’s behavior,” Stanton said. “Future generations will measure us, every single member of this committee by how we choose to answer that question. I hope we get it right.”

The hearing was the start of the second phase of the House impeachment inquiry that began more than two months ago, when House Speaker Nancy Pelosi said Trump’s discussions with Ukrainian officials were a “betrayal of his oath of office, betrayal of national security and betrayal of the integrity of our elections.” 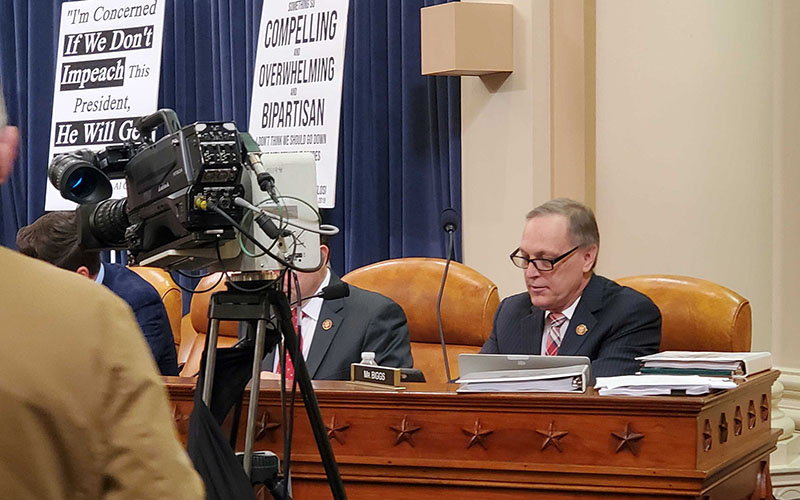 Rep. Andy Biggs, R-Gilbert, right, accused witnesses called by Democrats for the Judiciary Committee hearing as having already made up their minds on the possibility of President Donald Trump’s impeachment. (Photo by Wissam Melhem/Cronkite News)

Her comments came after a whistleblower reported concerns about a July 25 call to Ukraine President Volodymyr Zelensky, in which Trump asked Zelensky to “do us a favor” and investigate the son of former Vice President Joe Biden, a possible 2020 presidential challenger. Critics said that amounted to Trump threatening to withhold military aid and a meeting with Zelensky in exchange for Ukrainian interference in a U.S. election.

The three committees on Tuesday approved a 300-page report in which they charged Trump with misconduct for seeking election interference from the Ukrainians, and obstruction of justice for refusing to cooperate with congressional investigators and for prohibiting aides from testifying.

“Never before has a president engaged in a course of conduct that included all of the acts that most concerned the Framers,” Nadler said in his opening statement.

The three scholars handpicked by Democrats all agreed with Nadler that Trump’s actions met the definition of what the framers had in mind when they wrote impeachment into the Constitution.

Michael Gerhardt, a professor of constitutional law at the University of North Carolina-Chapel Hill, testified that “boundaries will just evaporate” if Congress does not impeach Trump, as future presidents will take it as a green light to take similar actions.

“The president has committed several impeachable offenses, including bribery, abuse of power and soliciting of personal favor from a foreign leader to benefit himself personally, obstructing justice and obstructing Congress,” Gerhardt said.

But George Washington University Law Professor Jonathan Turley, the Republicans’ lone witness, said he does not believe the accusations leveled against Trump rise to the standard of impeachment.

“I believe this impeachment not only fails to satisfy the standard of past impeachments but would create a dangerous precedent for future impeachments,” said Turley, who made a point of saying he did not vote for Trump in 2016.

The testimony brought a sharp rebuke from Rep. Doug Collins, R-Ga., who accused the witnesses of simply “pandering to the cameras.”

“To in some way insinuate on a live mic with a lot of people listening, that the Founding Fathers would have found President Trump guilty, is just simply malpractice with these facts before us,” Collins said. “That is simply just not right.”

Karlan said it’s her constitutional right to donate to whomever she wants. When asked why she gave more to Clinton than current candidate Warren, Karlan drew applause from the audience when she said she has been giving more to charities recently “because of all of the poor people in the United States.”

Despite the partisan fireworks, Lesko said she does not believe the hearing changed any minds.

“If they’re trying to sway the public, I don’t think this particular witness group is going to do it because they’re talking about what happened back in the House of Commons, back in the 1800s,” Lesko said. “I don’t think most people are going to stay tuned in.”