TUCSON – The University of Arizona and a neighboring school district are working on a pilot program to “grow” Tucson residents into teachers, offering free tuition and paying them $1,000 monthly stipends.

Pathways to Teaching, an education program and support system, will help 10 people earn their K-8 teaching degree in 17 months – and chip away at teacher vacancy rates and retention problems, advocates say. The pilot program of 10 potential teachers includes a classroom assistant, a member of a school Parent Teacher Association and health-clinic employee.

Karla Amezcua, 26, works as an appointment scheduler in a health clinic but intends to leave her job in January to start in the Pathways program.

“When I graduated high school and was getting ready to enroll in college,” she said, “I was having kind of an identity crisis. My mom had me when she was going to college to be a teacher, so I wanted to become a teacher for her, but I didn’t know what I wanted for myself.”

Amezcua changed her major to social work, but after taking just a few credits, she switched back to education. She eventually left college, tempted by the chance to make money without needing a degree.

Now with a family to support, Amezcua will return to education. Her mother-in-law, who has a master’s degree in education, forwarded the Pathways application to her earlier this year. 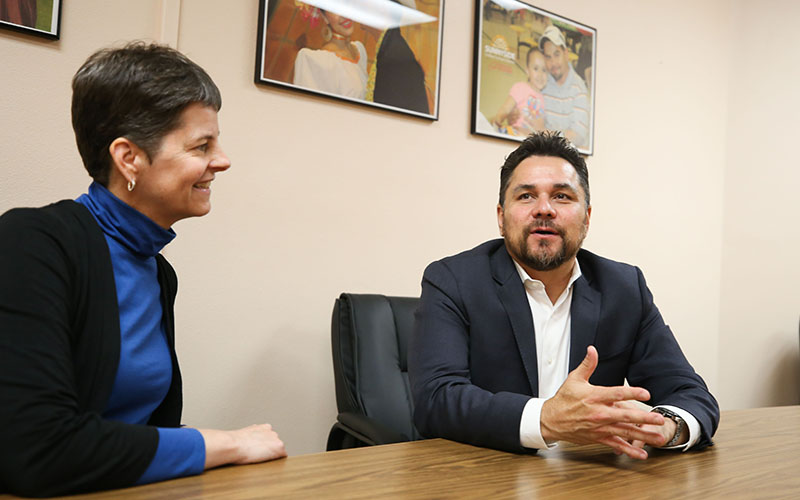 Marcy Wood, head of teaching at University of Arizona’s College of Education, and Steve Holmes, superintendent of the Sunnyside Unified School District, are piloting a program to improve teacher retention in Arizona. (Photo by Mara Friedman/Cronkite News)

Marcy Wood, the director of Pathways to Teaching and head of the department of teaching, learning and socioculture studies at UArizona, said she launched the program to begin to solve the issue of teacher retention in Arizona. She acknowledges the program is small but considers it an example for other states and schools to follow.

“The goal is to work on this idea that people come into the teaching profession and then they leave,” Wood said. “They leave to do other things, unsatisfied with things about the job, leave to go to other school districts where there might be different sets of resources.”

Arizona teachers often incur student debt they can’t pay back on a teacher’s salary, Gov. Doug Ducey said in his 2017 State of the State address. The Pathways program pulls funding from Ducey’s Arizona Teachers Academy, launched by the governor in 2017.

“I’m looking for the best and brightest to commit to teach in Arizona public schools,” Ducey said. “If you make that commitment, we’ll make this commitment: Your education will be paid for, a job will be waiting and you will be free of debt.”

Wood said the funding for Pathways’ students free tuition came from a partnership between UArizona and the Arizona Teachers Academy.

Teacher attrition around the country has risen sharply over the past 15 years and a third of new teachers leave the profession within their first five years of teaching, according to the education nonprofit Expect More Arizona. 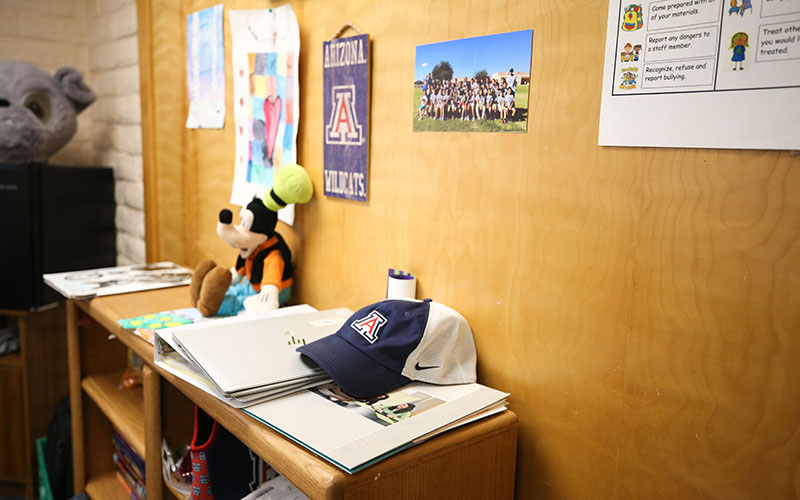 The Pathways to Teaching program helps Tucson home-grow teachers by covering the cost of tuition and providing a $1,000 monthly stipend for students who otherwise may not be able to obtain their bachelor’s degrees in elementary education. (Photo by Mara Friedman/Cronkite News)

The program, which starts in January, provides the equivalent of the junior and senior years of a bachelor’s degree in education. Rather than attend classes at the university, students will be paired to start teaching in a K-8 class at Sunnyside Unified School District. They will also take traditional classes at the district’s Los Niños Elementary School.

To be accepted, students must have earned an associate’s degree or the equivalent in general education credits, which the program’s creators say shows a student’s commitment to the teaching profession.

After graduation, the newly certified teachers will be required to teach in an Arizona public school for at least two years. Wood hopes their time learning the ins and outs of Sunnyside during their training will encourage them to stay in Tucson.

Candidates for the program are selected from Sunnyside employees and other Tucson residents. Of the 10 people starting in several weeks, several are teachers assistants. One person applying in 2021 is a bus driver, Pathways to Teaching coordinator Maria Orosco said.

Amezcua has worked through her identity crisis but is a little concerned about handling school again.

“I’m nervous because I haven’t been in school for five years,” Amezcua said. “I was the one who learned differently in school, I was not a visual learner – plus being a Spanish speaker meant I didn’t always get the help I needed with understanding concepts.”

Amezcua said she came back to help people like herself because her degree will come with an English as a Second Language endorsement.

“I never wanted to be in the medical field,” Amezcua said. “I took that job this year because I was unemployed for a while, but this new thing is one of the biggest opportunities I’ve ever received, in terms of college.”

Because the conditions of receiving money from the Arizona Teachers Academy include teaching in an Arizona public school for two years after graduation, Amezcua said she hopes she can stay at whatever Sunnyside school she is assigned to.

Steve Holmes, superintendent of the Sunnyside school district, approves of pulling candidates from the Tucson area.

“When I heard Marcy was involved in this unique idea of trying to get teachers prepared internally, I was really sold on the concept,” Holmes said. “Of course, in Arizona, it’s no secret that we’ve had a shortage of teachers who are staying in the field.” 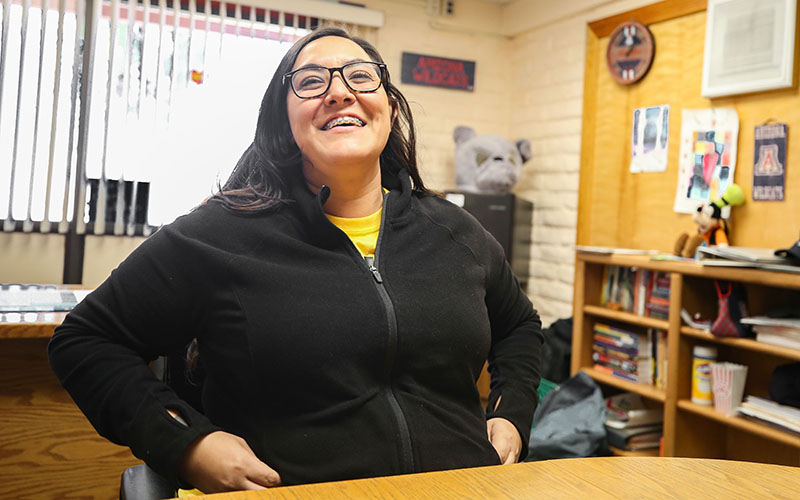 Acceptance into the Pathways to Teaching program has rekindled Laura Garcia’s dream of becoming a teacher. She was attending Grand Canyon University until financial issues this year derailed her plans. Garcia works as a special education assistant at Santa Clara Elementary School in Tucson. (Photo by Mara Friedman/Cronkite News)

Laura Garcia is a special-education assistant at the district’s Santa Clara Elementary School who had to abandon her dream of earning her teaching degree because of financial troubles.

After her mother died in 2017, Garcia recalled a conversation with her that inspired her to follow her original dream of becoming a teacher.

After attending Grand Canyon University for nearly two years, Garcia had to quit this year because her mother had provided some financial help.

“I stopped because I couldn’t financially afford my tuition at all,” she said.

She continued to work as a special-education assistant at Santa Clara School.

“I’ve been here at Sunnyside for now two years, and it’s really confirmed that I wanted to do this. I’ve had a fun time in there with students and I want my own classroom now,” she said.

Garcia said she wakes up excited to go to work now, and since she, as a teacher, is one of the more stable things in kids with special ed’s lives, it is an incredibly fulfilling job. She is looking forward to working in an environment that is familiar and being in a supportive program.

“I’ve been working really hard for this,” she said.

As a special education assistant at Santa Clara Elementary, Laura Garcia assists students with such personal care tasks as eating, using the restroom and switching classrooms. She hopes to become a teacher through the pilot program Pathways to Teaching. (Photo by Mara Friedman/Cronkite News)

Debra Bergman, Sunnyside’s chief human resources development officer, has been working closely with UA in the application process because Pathways students will be acting as full-time teachers when the program starts in January.

“It’s been great hearing their commitment, why they want to go into this program and their love of learning and their commitment to the community, because they’ve either grown up here or they started working here and have developed such strong relationships with the site and the people they work with,” said Bergman, who has worked in the district for 37 years.

Holmes encouraged other universities and school districts to try the same approach to help increase teacher retention, but cautioned that Pathways may not work for some districts.

“You have to look at whether you’ve established a sense of community in the institution. If you’re not in a district where there’s a strong sense of community, I’m not sure you’re gonna get the outcomes that are really intended to be part of this program,” Holmes said.

Bergman said the months spent at a Sunnyside school will lead to a strong foundation “where they’ve learned what the principal’s expectations are, worked with peers in the grade level they’re with, and they’ve gotten to know the children and the parents.”

When Pathways students become full-time teachers with their degrees in hand, they will know what is expected of them and won’t have to start day one trying to build that foundation, she said. 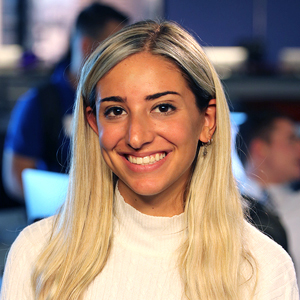