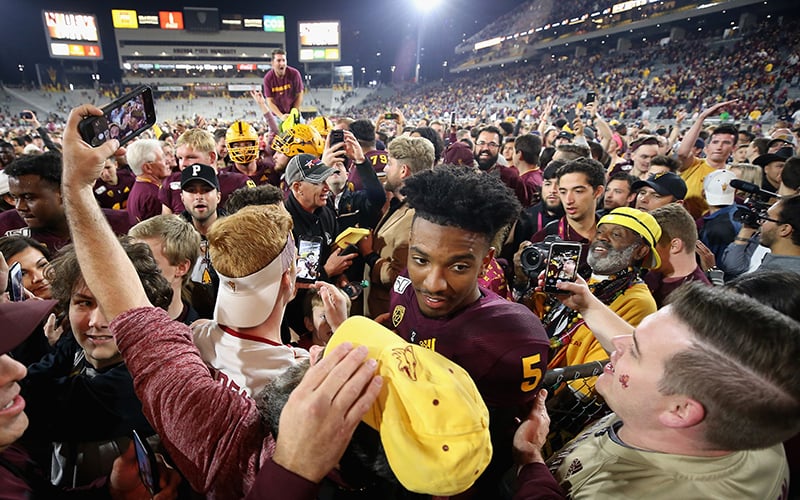 Arizona State quarterback Jayden Daniels had success on a national stage after defeating the No. 6 Oregon Ducks at Sun Devil Stadium. (Photo by Christian Petersen/Getty Images)

TEMPE – On November 25th, 2001, then-Indianapolis Colts coach Jim Mora walked up to the microphone after a blowout loss and went on a rant that still has life.

“Playoffs? Don’t talk about playoffs? You kidding me? Playoffs? I just hope we can win a game,” Mora said.

Almost 18 years to the day, ASU receivers Brandon Aiyuk and Frank Darby channeled their inner Mora, but in a slightly different context.

They weren’t talking about ASU’s playoff chances. No, the receiving duo was talking about crushing the hopes of the No. 6 ranked Oregon Ducks (9-2, 7-1) to make it into the College Football Playoff.

The Ducks traveled to Tempe for a primetime game against the Sun Devils and were favored to win big – 13½ point favorites by Westgate’s Las Vegas super book – but instead are flying home with their CFP chances decimated. ASU beat Oregon at home 31-28.

ASU (6-5, 3-5) was coming off four straight losses after starting out the season 5-1 and came into this game determined to knock off the top team in the Pac-12.

“We were tired of losing,” ASU coach Herm Edwards said.

“It’s a great feeling,” ASU true freshman quarterback Jayden Daniels said. “The games we were losing, we felt like we were better than the teams. Today we played a complete game as a team and it showed what we could do.”

Daniels, who went 22 of 32 for 408 yards and three touchdowns, and the Sun Devils got down early when the Ducks marched down the field and into the endzone with 6:32 left in the first quarter. ASU responded on the very next drive with a 57-yard touchdown pass from Daniels to Darby, who ended the game with four catches for 125 yards and two touchdowns.

ASU kicker Cristian Zendejas hit a 25-yard field goal with 3:40 left in the second quarter and put the Devils up 10-7, a lead that they would never relinquish. In fact, that was the first lead that the Sun Devils had had since Oct. 12 when they won in the last minute against Washington State in Tempe.

“We got up 10-7 and the defense played their butts off,” Daniels said. “On offense, Eno (Benjamin) ran hard and played his butt off. B.A., when the time came, he made a play and Frank made plays. So, just, as an offense and as a team we just came to play our butts off.”

After taking a 10-7 lead into the half, the Devils came out of halftime trying to put the game away. After a few turnovers from Oregon Ducks quarterback Justin Herbert and another Darby touchdown, the lead had ballooned to 24-7.

Herbert, who has been touted as a future first round pick in the upcoming NFL draft, had a rocky first 50 minutes of the game. He started out 10 of 22 for 127 yards and two interceptions. But he and the Ducks weren’t going down without a fight.

After a Zendejas field goal that made the game 24-7 with 8:42 remaining, Oregon went on a three play, 75-yard touchdown drive which lasted just 59 seconds to tighten it up.

ASU went three-and-out on its next possession and then Oregon went on a three play, 66-yard drive that lasted only 43 seconds to cut the ASU lead to just three points at 24-21.

But then, on the next possession, Daniels and Aiyuk put the Ducks playoff chances on life support.

After being sacked on second down, ASU faced third and 16 on their own 19 yard line against a charging Ducks team. Oregon had been single covering Aiyuk all game and on this play, he and Daniels took advantage of it and connected on an 81-yard touchdown.

“We know Oregon is Oregon and they think they are big, bad, mighty Oregon so I just had a feeling that they were going to come out and do what they do. They were still kicking me the ball, they were still playing me man-to-man…” said Aiyuk, who ended the game with seven catches for 161 yards and a touchdown. “… I’m glad they came out and played like that. If you want to, come on. Go ahead and play that.”

“The big play for us,” Edwards said, “is when they got it within a score and I talked to (Daniels) the series before he went out and I said, ‘Hey man, it’s really simple now. If you make three first downs in five minutes the game is over. But you can throw a touchdown too if you want.’

“And he threw a touchdown. I didn’t expect it to be on third and 16 or whatever it was. He threw the long ball pretty good tonight.”

Like Mora, Edwards also had a viral press conference during his time in the NFL. As coach of the New York Jets on Oct. 30, 2002, Edwards said the phrase, “You play to win the game.”

Seventeen years later, his Sun Devils did just that.