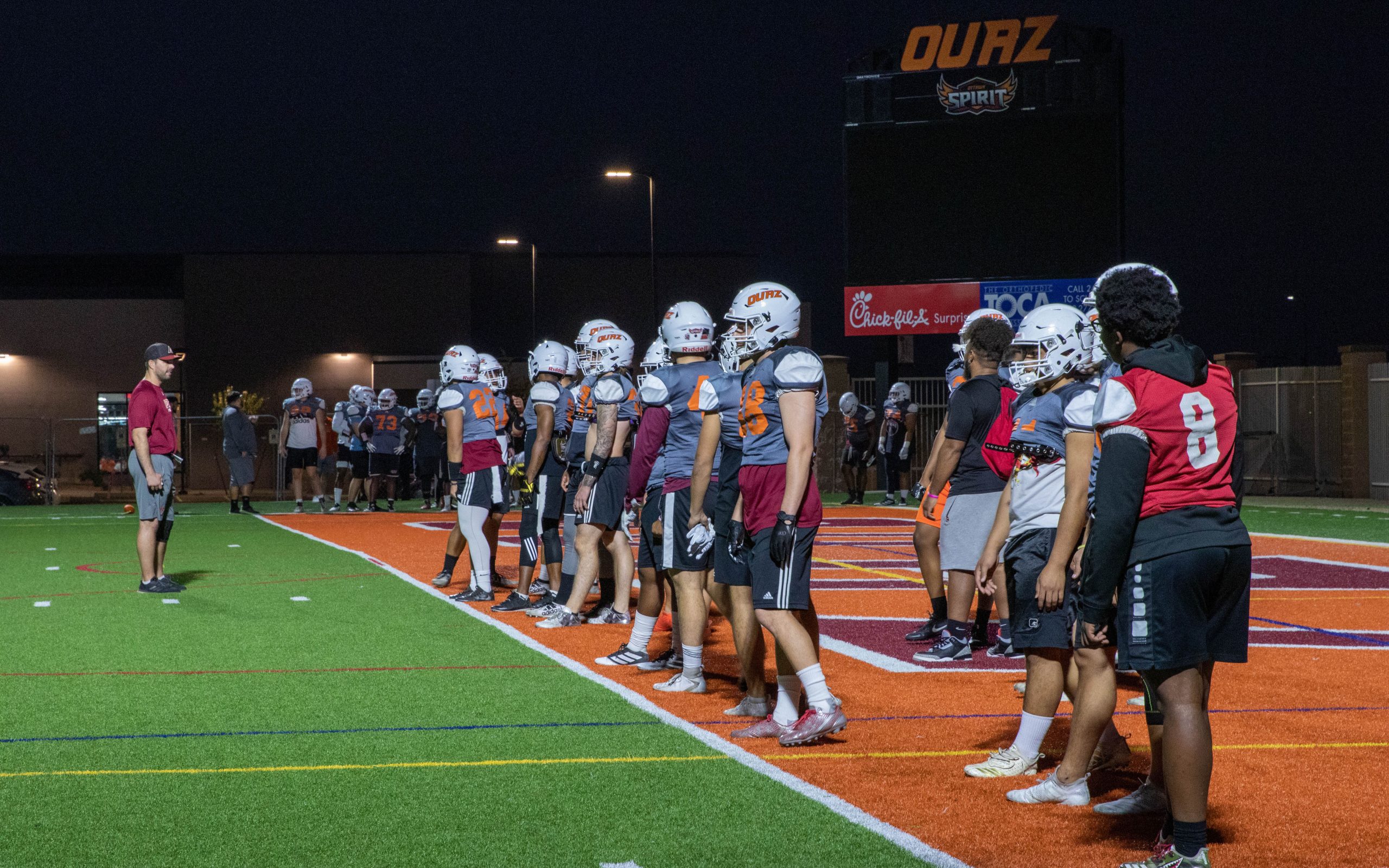 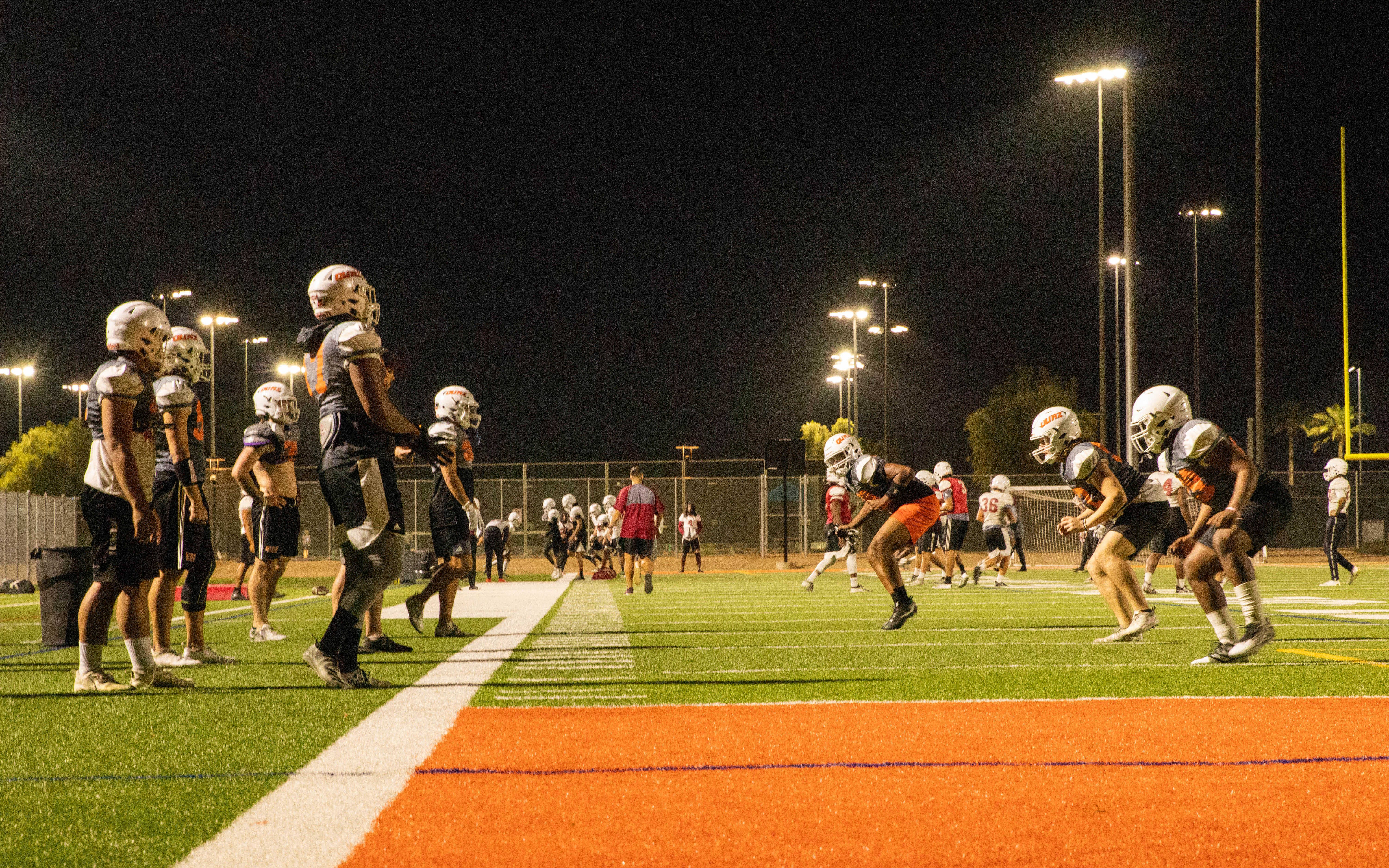 SURPRISE – Starting a college football program is usually a long-term process. Not so for Ottawa University of Arizona.

In 2017, the newly built school in Surprise had no football team. There were no players, no facilities and no field. Now, just two years later, the football team has secured a berth in the National Association of Intercollegiate Athletics (NAIA) Football Championship Series.

After posting a 9-1 record in the regular season, OUAZ’s football team will travel north to face the College of Idaho in the first round of the NAIA playoffs on Saturday. It will be the team’s first postseason appearance.

So how did the football team at OUAZ transform into a conference title-winner in just two years?

The first and most fundamental step was hiring the right assistant coaches, OUAZ football coach Mike Nesbitt said. He needed people who understood the particular challenges of recruiting and starting a team from scratch.

“I just wanted good guys. That was the most important thing. I wanted good people,” Nesbitt said. “I needed guys who could build a relationship and stand in front of parents and kids and not act like used-car salesmen.”

Nesbitt assembled his coaching staff by hiring a number of young assistant coaches well-suited to the job. Defensive coordinator Mike Bethea came from Texas Christian University and welcomed the opportunity to put his stamp on the OUAZ defense. Nesbitt chose David Moseley, a retired Marine, to oversee recruiting. These assistant coaches have helped Nesbitt establish a winning team culture.

The newness of the school meant Nesbitt and his coaching staff couldn’t sell recruits on the team’s reputation or a record of success. In 2017, Ottawa’s campus in Surprise was still in the process of being built. There were no dorms, no locker rooms. No state-of-the-art facilities to show off. 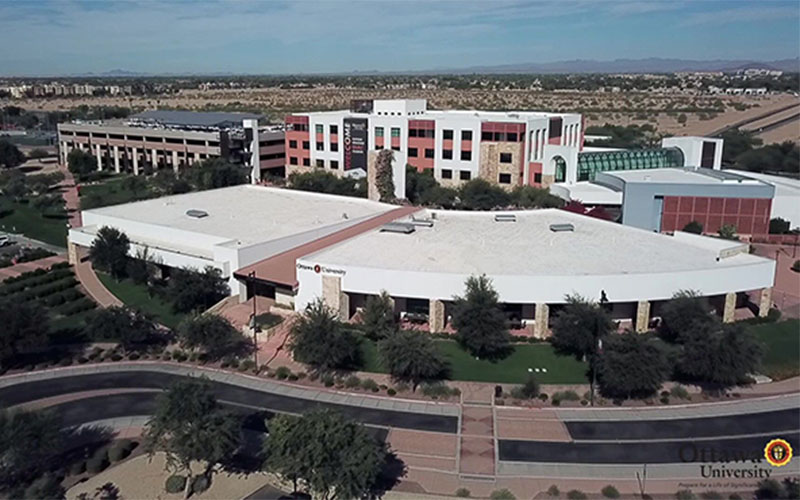 “This was a dirt parking lot when we started,” Nesbitt said. “I had to hire the right core coaches who understood (we) were selling a vision of what we thought our football program could look like. It had nothing to do with helmets or jerseys or flash. I knew the character of my assistant coaches was going to sell the program and help it grow.”

The roots of Ottawa University aren’t new. The private Baptist liberal arts university was founded in Ottawa, Kansas, but only recently added a second residential campus in Surprise that has an enrollment of approximately 800, many of whom are athletes.

Many college football recruits like the idea of playing for a school with a strong and storied football tradition. Joining the football team at OUAZ required a different kind of mindset. It takes a certain type of person to imagine the promise and potential of a team that didn’t exist yet.

“Being able to be first is something I thought I’d enjoy,” said Kris Ewens, a running back from Riverside, California, who was one of the team’s first recruits. “Being part of a pioneer team and being the first to put on the uniform. It’s why I came here.”

To further encourage player development, Nesbitt and his coaching staff made an effort to recruit players who would embrace opportunities to mentor younger guys on the team.

The opportunity to play appealed to many of the recruits. Some of them were transfers from four-year schools where they hadn’t seen much playing time. Some were Arizona natives at D-I schools in snowy climates, who missed their home and hot weather. Several were casualties of Arizona’s decision to eliminate all junior college football programs in the state at the end of the 2018 season.

Playing college football in a newly established program comes with its own frustrations and challenges, even on a team with strong leadership. Young teams are more prone to losing direction, said Amare Burks, a free safety from Peoria who’s been with the team since its inception.

“Tradition is easier in many ways,” Burks said. “If you go to a program that’s been solidified for a long time, there’s a model in place to follow, a kind of energy that’s already been established there. When you’ve just started, it’s sometimes hard to see the team’s future and you can’t look to the past for guidance.”

Nesbitt’s easy-going personality is advantageous in this regard. Although college athletes often feel more pressure to perform after experiencing success, Ewens said his head coach sets a tone that alleviates some of this pressure that guys on the team might otherwise feel.

“He is a really laid-back kind of guy, but he wants to work hard. Nobody has more energy than he does,” Ewens said of Nesbitt. “I think his demeanor reflects the type of players we are. We don’t worry about a lot. But we’re ready to work hard all the time.”

There was also the matter of finding a place for the team to train while OUAZ finished building its own facilities on campus. Nesbitt mentioned several local officials who were instrumental in helping the team find practice fields to use, including Paul Frie, the city of Surprise’s assistant director of Parks and Recreation, and Mike Hoover, who works in the city manager’s office. The team also benefited from having access to people and resources at the Surprise spring training facility, which is located across the street from the OUAZ campus.

“We had a lot of help the first year,” Nesbitt said. In addition to Frie and Hoover, Nesbitt also cites Valley Vista High School football coach Josh Sekoch, who gave Nesbitt and the team access to his school’s weight room and gym.

Nesbitt said he feels grateful because if it weren’t for the generosity of local teams and the city of Surprise, “Ottawa’s football team would have been dead before we ever started. They really helped us get going on the right path.”

Local residents in Surprise have embraced OUAZ athletic programs, and the football team in particular, according to Frie. The city’s relationship with the team is reciprocal, he explained, as the OUAZ football team has been receptive to volunteering at events and engaging the local community.

“The guys participated in Buddy Sports, the city’s adaptive recreation program for kids with disabilities,” Frie said. “They jumped in feet first and didn’t ask any questions. They showed up, went to work and developed a great relationship with all the kids.”

Buddy Sports stands out to Frie as an example of the team’s connection to the surrounding community. The program runs every fall during peak college football season and Frie noticed how the players still found time to participate and show their presence.

Like Frie, Nesbitt appreciates the football team’s relationship and positive interactions within the community.

“The city of Surprise has adopted these kids,” he said. “It’s a neat part about our niche here. The city wanted a small college football program and the guys love playing here.”

The team’s success this year doesn’t surprise Nesbitt. Recruiting the right guys was key. He knew if he did that, the success would come. Even though recruiting is a constant and ongoing project, it seems like Nesbitt found the right guys for right now. The players’ personalities complement one another. Their team chemistry is synergistic and special, according to multiple players.

That the team is close-knit is one of its greatest strengths, according to Ewens.

“On some teams there are teams within teams. That’s not the case with us,” Ewens said. “We’re all one brotherhood and everybody just works together to get to the same goal.”

Burks also remarked on the team unity that Ewens described.

“It’s a true brotherhood,” Burks said. “We’re all working towards the same thing.”

Considering what OUAZ’s football team has accomplished in a mere two years, it will be exciting for college football fans in Arizona to follow the team’s journey as OUAZ’s football program grows. How will the team’s talent and potential unfold? Like OUAZ football players In a dirt parking lot, we can only envision what that looks like.

Fans can livestream the OUAZ vs. College of Idaho game on Network NAIA. Kickoff is at noon on Saturday at Simplot Stadium in Caldwell, Idaho.