By Kyle Dowd/Special for Cronkite News

PHOENIX – Somalian refugee Mahad Mohamed started a soccer team in 2008 to provide a sense of community for other African refugees in Arizona. He called the team Walalaha, the Somali word for brothers.

One of its best players, Kadar Abdifidhin, who joined the 28-player team as an 8 year old, said Walalaha FC Phoenix is aptly named.

The team travels around the United States playing other refugee soccer teams, going as far as Minnesota – home to 69,000 Somalis.

“We make plans together, we eat together we do a lot of things, it’s like a family more than a team,” Abdifidhin said. “It means a lot to me.” 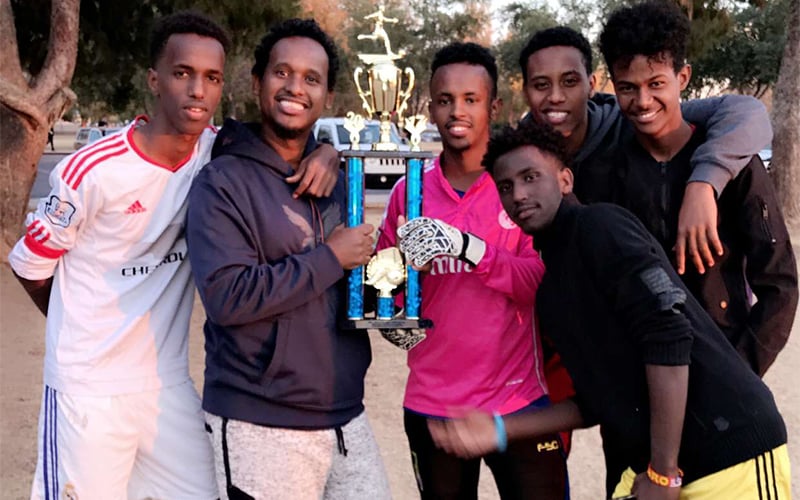 Kadar Abdifidhin, left, celebrates with some of his teammates and his coach, Mahad Mohamed, second from left, after a championship win. (Photo courtesy of Kadar Abdifidhin)

Since the Somali civil war broke out in 1991, more than 100,000 refugees from that impoverished nation on the Horn of Africa have settled in the United States. In Arizona, 7,446 Somalian refugees have arrived since 1992, the most from any African country.

Mohamed was 21 when he came to America 13 years ago. Two years later, he founded Walalaha – a team he continues to manage while working as an Uber driver off the pitch.

Abdifidhin said life in Somalia “is very hard over there, but, like, it gives you a lesson.”

“I take that lesson to here; it’s why I am coaching,” he said. “That’s why I don’t want these people to suffer like how my dad suffer, how my country suffer, how my people kill each other.”

After being displaced by war, he said, he and his friends in the refugee camps “always dreamed of coming to America together and becoming professional soccer players.”

“As of now,” he said, “it just seems like that dream has become true for me, and I would also want them (his friends from the camps) to be here and, like, dream the same way.”

In 2018, the U.S. Supreme Court upheld a Trump administration ban affecting refugees from Somalia and six other countries. Many of Walalaha’s players have friends and family stuck in Africa.

“They (administration officials) didn’t see the life back in Africa,” Mohamed said. “If they could see one day, they go there and see how things are, they should realize that they need to bring those people to the United States.”

Both coach and player have one major thing in common: gratitude.