Before joining the Los Angeles Wildcats, Rashad Ross spent the summer with the Carolina Panthers. He was waived in August. (Photo by Grayson Schmidt/Cronkite News)

LONG BEACH, Calif. – When Rashad Ross walked onto the field at Veterans Memorial Stadium recently, he looked like a professional football player. In addition to his athletic 6-foot frame, black L.A. Wildcats sleeveless shirt, bright gold receiver gloves and black mesh shorts adorned with the Arizona State pitchfork on the thigh, he carried himself like a man who has been there before.

That’s because he has. Many times.

At the end of March, Ross was leading the Alliance of American Football in receiving touchdowns, second in receiving yards and had the Arizona Hotshots at a 5-3 record and first place in the Western Conference.

On April 2, the AAF abruptly suspended operations. Two days after that, an unexpected upgrade: Ross signed with the NFL’s Carolina Panthers.

Two weeks after that, a devastating turn: His father died.

“I wanted to finish and play it out, because I was really enjoying myself in that league,” Ross said of the AAF, which eventually declared bankruptcy. “But then I think that everything happens for a reason because my dad got to see me sign back with an NFL team.”

The former ASU wide receiver eventually was waived by the Panthers, his 10th NFL team in six years.

Ross, 29, signed with the Tennessee Titans after going undrafted in 2013, following two seasons at ASU. Since then, he has had NFL stints with Kansas City, Washington (twice), Chicago, Los Angeles (Chargers), Detroit, San Francisco, Buffalo and Arizona.

Although 2019 essentially has yanked the rug out from under his football career and his life, in October, Ross was drafted by the Los Angeles Wildcats of the revamped XFL and once again found himself in an upstart league. 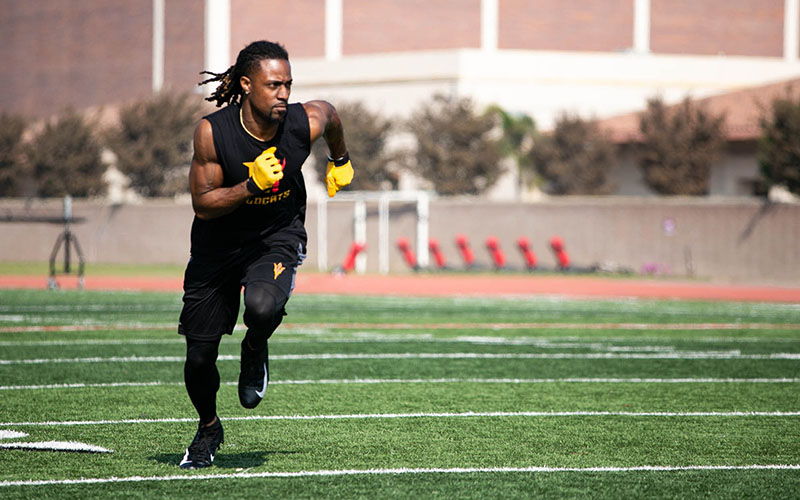 Rashad Ross was the first receiver selected by the L.A. Wildcats in the inaugural XFL draft in October. (Photo by Grayson Schmidt/Cronkite News)

His ultimate goal is to return to the NFL, but as he heads into the XFL’s inaugural season – and second incarnation – 2020 represents a second chance.

“It’s exciting to be the first team, and we can establish something together,” Ross said. “There’s no politics involved and nothing is set, so it’s a fresh start.”

As Ross laced up his cleats and taped his fingers for a training session, he chatted with teammates about routes, the upcoming season and life in L.A. Although his teammates come from diverse backgrounds, all played college ball at a high level, and all have had stints in the NFL and AAF.

The XFL will launch its first season in February 2020, nearly 20 years after the original league debuted, with eight teams split into two divisions. Originally marketed as a rougher league with fewer rules to give football fans their fix after the conclusion of the NFL and NCAA seasons, the first incarnation was owned by World Wrestling Entertainment (better known as WWE) and NBC, which broadcast the games. This XFL is owned by WWE Chairman and CEO Vince McMahon’s, Alpha Entertainment, and the games will be broadcast on Fox, FS1, ABC and ESPN.

Ross was the Wildcats’ second round pick in the inaugural XFL draft. The league was set up so that quarterbacks were assigned to teams, and then skill positions, linemen and defensive players were selected during the 10-round draft.

The draft format was a little different for Wildcats offensive coordinator Norm Chow, but Chow said he knew for sure that he wanted Ross on the team.

“He just emerged from the top,” Chow said.

To call Chow a veteran of the game would be something of an understatement. For nearly 20 years, Chow called plays for a LaVell Edwards team at BYU that consistently led the NCAA in total offense. He then moved on to North Carolina State, where he coached a freshman Phillip Rivers, before becoming offensive coordinator for USC under Pete Carroll, where he helped coach the Trojans to two national championships and two Heisman Trophy winners.

Bottom line: The man knows good offense, and he felt Ross could be a key player with the Wildcats.

“We’re going to have to throw the ball around a little bit, everybody knows that, and I think he’ll be a very integral part of that,” Chow said.

In addition to Chow, Ross said he is also especially hyped to play for wide receivers coach Mike Wilson, a Carson native who won four Super Bowls with the San Francisco 49ers in the 1980s and early 1990s.

“I’m ready to get coached by him because, you know, he’s been in the game; he’s a champion and I just want to learn from him,” Ross said.

Wilson and Chow were the only coaches at the training session, which apart from Ross included quarterback Luis Perez, tight end Johnny Stanton and fellow receiver De’Quan Hampton.

The Panthers were Ross’ ninth NFL team in six years. He went through off-season drills and summer camp but was waived in late August. During his time in Charlotte, Ross said he knew where he fit on the Panthers’ roster and how far he could climb.

“I realized when I was the only receiver to score in the preseason, it was like week two, and then when week three came and they still had me down on the depth chart it showed me that no matter what I did, they already had their minds made up,” Ross said.

Rashad Ross was leading the AAF in receiving touchdowns, second in receiving yards and had the Arizona Hotshots at a 5-3 record and first place in the Western Conference when the league folded in April. (Photo by Grayson Schmidt/Cronkite News)

Rashad Ross is strict in his belief that warmups are completed without gloves. (Photo by Grayson Schmidt/Cronkite News)

Quarterback Luis Perez, left, and Rashad Ross both have NFL and AAF experience as they head back to their home state to play for the L.A. Wildcats. (Photo by Grayson Schmidt/Cronkite News)

But the preseason games and the shot at another NFL roster weren’t what Ross remembers about Carolina. The Panthers represented another chance for Ross’ father, Zackery, to see his son make the NFL.

Zackery Ross died of liver cancer April 15, at age 59. Ross, who grew up in Vallejo, about 25 miles north of Oakland, said his father was one of his biggest role models, motivators and fans. No matter the level of play or part of the country, Ross said his dad was always with him. Look a little closer and he still is, around the receiver’s neck.

From a distance, the gold chain seems mundane, as Ross is far from the first pro athlete to wear jewelry. As he sat on the sideline after the two-hour training session, he took off his cleats, took out the band keeping his hair up, and revealed the full necklace from under his shirt. At the end of the chain, a gold spherical frame a little over an inch in diameter, in it a photo of his father.

As Ross threw his cleats into a drawstring bag, he paused to take a sip from his Gatorade. He checked his phone and made small talk with Perez. As the last Wildcats to leave, the teammates chatted about how they felt the training session went, where they were going to eat after and the season ahead.

“We’re going to be good,” Ross said to Perez.

With the failure of the first XFL and the new version starting up a year after another professional football league failed, a little skepticism is understandable.

Ross is not one of those skeptics, though.

He has experienced the ups and downs of life and football, and with a chip on his shoulder and his dad around his neck, he seems ready for whatever comes next.

“A lot of people are one-and-done,” Ross said. “A lot of people made it this far and were done after they got cut the first time, but me … I’m blessed to have the opportunity to keep going.”