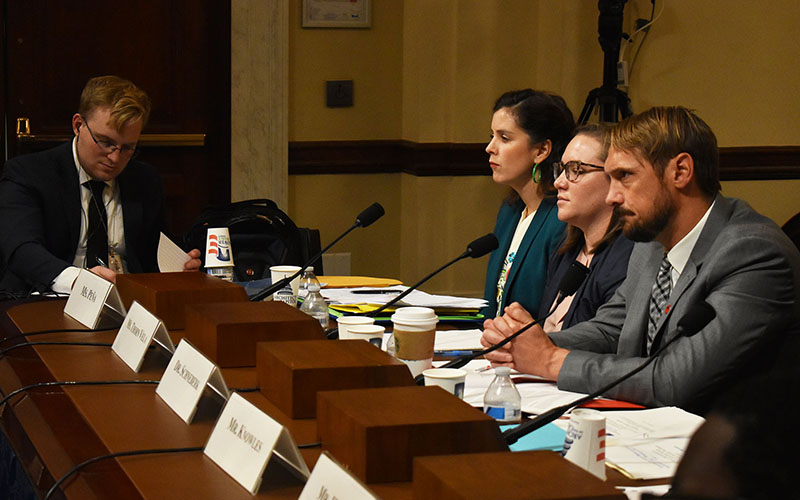 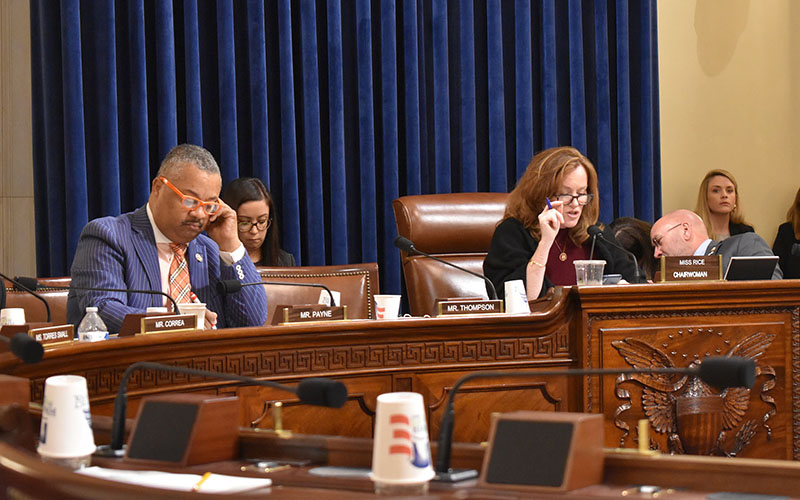 Rep. Kathleen Rice, D-N.Y., right, grills witnesses in a House Homeland Security subcommittee hearing on the impact of the Migration Protection Protocol, a Trump administration policy that lets the government force asylum seekers to await the outcome of their cases in Mexico instead of the U.S. (Photo by Vandana Ravikumar/Cronkite News)

WASHINGTON – House members sparred Tuesday over the Trump administration’s so-called “Remain in Mexico” policy for asylum-seekers, with Democrats calling it unsafe and “abhorrent” and Republicans saying it has helped reduce a massive backlog in immigration courts.

The policy, introduced in January by the Department of Homeland Security, lets the government accept asylum requests from immigrants at the U.S.-Mexico border and then force them back to Mexico to wait while their request is processed. Previously, asylum seekers could wait in the U.S.

Since it was implemented in January, the program has forced around 57,000 migrants back into Mexico, where critics say the asylum-seekers are being preyed on and left to fend for themselves. Those turned away often include vulnerable people, such as pregnant women, children or people with disabilities, they said.

“Asylum seekers are being returned to dangerous cities, where organizations are documenting hundreds – hundreds – of incidents of kidnappings and violence,” said Laura Peña of the American Bar Association’s Commission on Immigration.

But supporters of the plan, formally known as the Migrant Protection Protocol, said critics at the hearing are overstating the problems migrants face on the other side of the border.

“I think all of us care about people being abused, if someone is being raped by cartels, or children are being abused by cartels, of course, none of us would want to ignore that,” Lesko said. “But there’s a difference in how we should mitigate the problem.”

But Rep. Veronica Escobar, D-Texas, said the policy has created “a new ecosystem of criminal activity … on the other side of our ports of entry.”

“The American government’s policy is sending vulnerable migrants into the hands of cartels, so that cartels can extort money after they’ve kidnapped people,” Escobar said. “These are people who have been denied due process and have been put in danger.”

Peña insisted the danger prevents many U.S. attorneys from going to Mexico to meet with their clients who have been turned back.

“Each time I need to meet with my client, I must take precautions to ensure my personal safety while in Mexico,” she said. “I cross only during the day and coordinate my visits with humanitarian groups or other colleagues.”

Besides the danger, critics said that policy has burdened faith-based organizations that have had to care for and protect the migrants in the government’s absence. And they said it causes lasting trauma.

Multiple witnesses cited accounts of migrants who allegedly faced severe violence and developed psychological trauma after being forced to remain in Mexico, including a woman who was raped and an 18-year-old boy who was attacked by gang members.

“Stress and constant vigilance are required to survive in an under-resourced border town in Tijuana,” said Dr. Todd Schneberk, an asylum network clinician for Physicians for Human Rights. “I urge Congress to take action by urging DHS to defund MPP … or risk retraumatization of this vulnerable population.”

Thomas Homan, former acting director of U.S. Immigration and Customs Enforcement, suggested that rolling back MPP could create additional problems for the country in the future.

“That’s your next DACA population,” Homan said, referring to the Obama-era program that defers deportation of some young immigrants who were children when they were brought to the country illegally by their parents. “I don’t know what’s going to happen with DACA at the Supreme Court, but that’s your next 200,000 people.”

Supporters also said the program is working well and is helping to reduce an existing backlog of more than 1 million immigration court cases.

Far from solving the problem, Democrats like Rep. Bennie Thompson of Mississippi said policy “runs contrary to our American values” and “has raised serious legal questions and created a new humanitarian crisis along our southern border.”

Erin Thorn Vela, an attorney with the Texas Civil Rights Project, said that is a crisis she faces regularly.

“I am horrified that all I can say to asylum seekers in Matamoros is this: Hold on and stay safe. That statement feels empty when I know how often people are kidnapped from the tents, abused, and tortured,” said Thorn Vela, who called for an end to the policy.

“It haunts me when I walk back across that bridge to the United States, that I only have those words to console my clients,” she said.