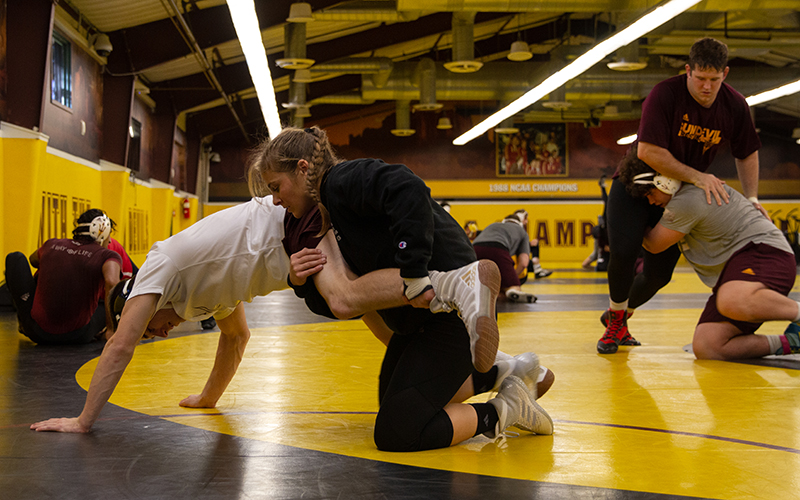 New Jersey native Marlee Smith, a sophomore wrestler at Arizona State, has been wrestling since she was 8. (Photo by Sarah Farrell/Cronkite News)

TEMPE – Walk into the Arizona State wrestling room during a practice session, and dozens of wrestlers will be sparring on the mats. Coach Zeke Jones is likely to be sitting on his exercise ball along the padded wall, chirping instructions to his athletes.

Working in a far corner of the room, there will be one wrestler who stands out from the rest.

To an outside observer, Marlee Smith may seem to have a calm and quiet demeanor, but on the mat she is as fierce and skilled as any of the men wrestling beside her.

Smith is only the second female walk-on in ASU wrestling history, and much of the time she is the only woman in the room. For her, that’s nothing new.

She began her athletic career on the sidelines as a cheerleader rooting for her dad’s youth football team. He was short a player one day, so he grabbed 8-year-old Marlee, threw some pads on her and jump started her brief football career. From second through seventh grade, Smith excelled at every position she tried, from running back to tight end to kicker.

She was an explosive player, too, the way her mother Christie Smith remembers it.

Smith was a multi-sport athlete growing up. She played everything from soccer to football to field hockey. Near the end of high school, she decided to solely focus on wrestling. (Photo courtesy of Marlee Smith)

Smith began her athletic career as a cheerleader. When she was eight-years-old, her father pulled her off the sidelines an onto the football field. From that point on she was no longer a cheerleader, but a football player. (Photo courtesy of Marlee Smith)

She began wrestling in second grade. “She went in the [wrestling] room, and she fell in love with it,” her mom, Christie Smith, said. (Photo courtesy of Marlee Smith)

When Smith was in high school, girls wrestling was not a sanctioned high school sport in New Jersey. For three years, she competed on the boys team at High Point High School. (Photo courtesy of Marlee Smith)

Smith attended Wyoming Seminary in Pennsylvania for her senior year of high school. It was the first time in her career that she was part of a women’s wrestling team. (Photo courtesy of Marlee Smith)

It was through football that she was introduced to wrestling. In Wantage, New Jersey, youth wrestling is popular. So Smith joined the boys from her youth football team and started wrestling at 8. She quickly discovered that she was really good at it.

As an eighth grader, it really hit her. She was a wrestler.

“That’s when I was not hanging out with friends anymore,” she said. “I was just home running, lifting and everything, just eating healthy. And that’s my first year that I made the varsity lineup.”

She continued to play soccer and field hockey and wrestled through her first few years at High Point High School, where she wrestled on the boys team because girls wrestling was not a sanctioned event in New Jersey yet.

“When she started, she really was just one of maybe four or five girls in New Jersey who wrestled,” her mom said. “She was always the only girl in the youth program. She was the only girl at High Point High School when she wrestled from freshman to junior year. She’d go to tournaments, and she’d be the only girl at a tournament.”

By the time she reached her junior year, though, the multi-sport athlete realized she couldn’t keep doing it all. Some weekends she would run from practice to practice, wrestling, playing soccer and field hockey all in one day, her mom said.

That’s when Smith decided to step off of the playing field and spend more time in the wrestling room. She began competing around the country in USA Wrestling cadet and junior freestyle events.

“She realized she couldn’t be a seasonal wrestler to compete at that level,” Christie Smith said.

Marlee also transferred from her hometown high school to compete on the girl’s wrestling team at Wyoming Seminary in Kingston, Pennsylvania for her senior season. It was the first time in her career that she competed on an all-girls wrestling team, her mom said. And this wasn’t just any girl’s wrestling team. Many of the athletes were Junior World Team members, and she was exposed to coaches like Adeline Gray, a five-time world champion and 2016 Olympian.

During that time, Smith was traveling around the world competing in tournaments for Seminary, and she caught the attention of many women’s collegiate wrestling programs. Coaches from around the country were recruiting her, but Smith wasn’t set on going to a traditional women’s wrestling program after high school.

A lot of people questioned her decision to forego collegiate wrestling and come to Arizona State, but Smith knew as soon as she arrived in the desert that it was the right place for her.

“I immediately fell in love with the wrestling program and campus,” Smith said. “I felt like they had everything for me that I needed and knew this was where I wanted to be.”

Even though ASU does not have a women’s wrestling program, and Smith knew she would likely never get to compete for the maroon and gold, she decided it was the best fit for her.

“I looked up wrestling schools, and I didn’t like where they were located,” Smith said. “They were just in the middle of nowhere, small, and some didn’t have my (academic) major. And I was always thinking about ASU, about how much I really liked it. I wanted to train with elite athletes, and have some of the best coaches. So I knew this was the place to be.”

During her freshman year, Smith trained at Sunkist Kids Wrestling Club Regional Training Center. There she worked with coaches like Jamill Kelly, a U.S Olympic silver medalist in 2004, and other athletes like Kelsey Campbell, a former Olympian and ASU alum.

“She’s very coachable,” Campbell said of Smith, “does what she is told, and when I train with her she shows a lot of maturity and has natural instinct, which makes her a great athlete.” 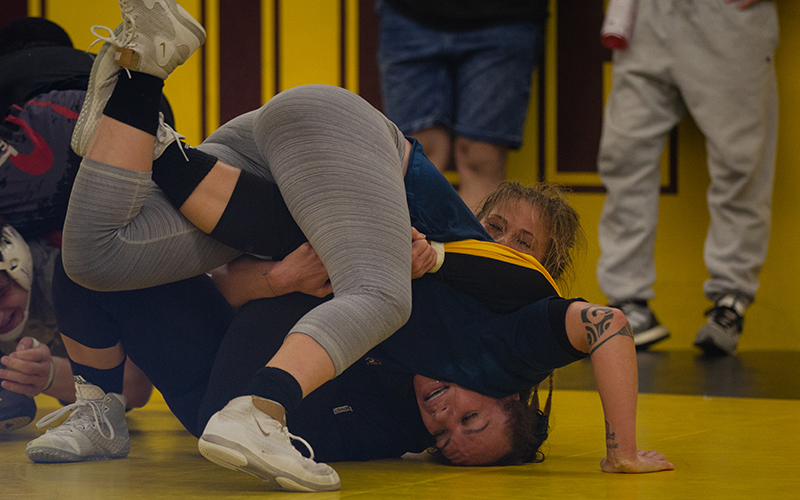 Smith often trains with Kelsey Campbell during practices. Campbell is a decorated wrestler having spent time on the US World and Olympic Teams. (Photo by Sarah Farrell/Cronkite News)

Campbell has not only been a training partner for Smith, she has become a mentor as well.

“You know I said to her, ‘You have Kelsey Campbell here. A World Team member and Olympian who wants you to be her training partner. Like that’s huge,’ ” Christie Smith said. “She would not have gotten that anywhere else. Kelsey has helped Marlee in so many ways, just like her mindset, and life lessons. So much Kelsey has been through, she’s helped Marlee.”

In her second year at ASU, Smith earned a walk-on spot on the team. She runs, lifts and practices alongside all of the male athletes on the ASU squad.

“I think it’s been good for her,” Kelly said. “It gives her more confidence. The guys have accepted her as a member of the team.”

Jones sees Smith’s presence in his wrestling room as a positive for the Sun Devils.

“She’s a tremendous training partner for our guys,” he said. “She just adds to the collective strength of what we’re doing.”

She’s been training alongside the ASU men, sparring with Campbell during practices and preparing for the first senior-level tournament of her career. She’ll make the trip to midtown Manhattan in New York, Nov. 15 for the Bill Farrell Memorial International Open at the New York Athletic Club.