An immigrant family turns itself in to a Border Patrol agent in June after crossing the Rio Grande in June to enter the U.S. illegally. New data who the number of single adult migrants stopped surpassed the number in families for the first time in a year in October. (Photo by Mani Albrecht/Customs and Border Protection) 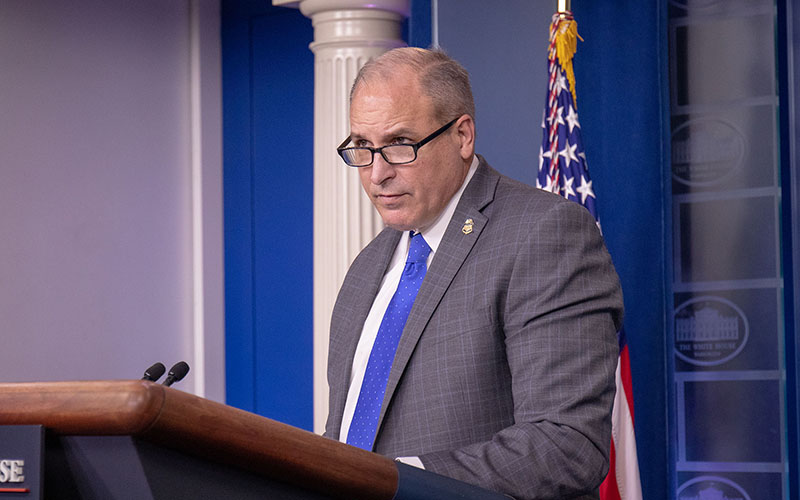 Acting Customs and Border Protection Commissioner Mark Morgan unveiled the new border apprehension numbers during a briefing in the White House. He said the October numbers showed a “shift in the demographics” from previous months. (Photo by Megan U. Boyanton/Cronkite News)

WASHINGTON – For the first time in at least a year, more adult immigrants were apprehended at the southern border than families, according to October apprehension numbers released Thursday by Customs and Border Protection.

Acting CBP Commissioner Mark Morgan said during a White House briefing that October marked a significant “shift in the demographics” of apprehensions, with both the number of families falling and the number of Mexican immigrants surging past those from Central America.

“For the first time in nearly 18 months, Mexico was a country of origin for the majority of apprehensions and inadmissible aliens rather than from the Northern Triangle countries, with single adults surpassing families,” Morgan said. “The numbers are down.”

Experts say the shifts are likely due to the Trump administration’s “heavy-handed approach” to immigration, including new limits on who can seek asylum, rules that force applicants to wait in Mexico for their asylum decisions and increased pressure by the Mexican military.

“Because your chance of being forced to wait in Mexico for many months of uncertainty is almost complete now, people are not really trying the journey,” said Adam Isacson, the defense oversight director for the Washington Office on Latin America. “And smugglers can’t promise that you’ll get to the United States.”

But experts also said they expect the decreases to be short-lived.

The CBP data show that 15,096 Mexican adults were caught trying to enter the U.S. illegally over the southwestern border in October. That compares to a total of 11,957 immigrants from the “Northern Triangle” countries of El Salvador, Guatemala and Honduras – 6,508 of whom came as part of a family and 5,449 who were single adults.

When “inadmissibles” are included – immigrants who presented themselves at ports of entry and were rejected – the number for October reached 45,250, a sharp drop from the 144,116 in May.

Katie Sharar, communications director at Nogales-based Kino Border Initiative, said the decline can be pinned in part on the Trump administration’s Migrant Protection Protocols, which require migrants with pending immigration proceedings to wait in Mexico instead of the U.S.

Isacson noted that the administration has also made the path to asylum tougher with its third-country transit bar. Implemented in July, the ban prevents migrants from applying for asylum in the U.S. unless they have first received it in the transit country: For Central Americans, that means Mexico.

But he also expects only a short-term drop in apprehension numbers, as smugglers figure out different ways into the country for the steady stream of would-be asylum seekers.

“More people will come, but they won’t seek to be apprehended the way they have been,” he said. “They’ll seek to avoid apprehension.”

The shift in strategy by smugglers could lead to more dangerous routes that might give families pause, but that single men would be far more likely to risk, said Jessica Bolter, an associate policy analyst with the Migration Policy Institute.

She explained that the pressure applied by the U.S. government on Mexico to ramp up its own immigration system has also helped deter migrants from the Northern Triangle countries.

Sharar has seen those changes at the Arizona border, noting that there are fewer Central Americans showing up now than in months prior.

“The enforcement of the Mexican border with Guatemala – detention of Central Americans – has had a pretty big factor,” she said.

But she said she does not believe that October’s CBP data “means that much” in the long run.

“As long as the need to migrate, the need to seek safety, to give your kids a chance to survive past the age of 10 or 14, to put food on the table is present,” Sharar said, “people will find a way to survive.”