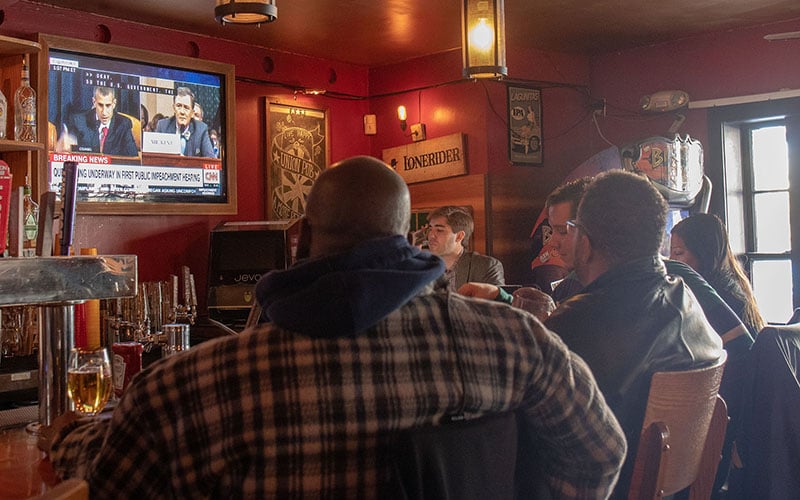 TVs at the Union Pub on Capitol Hill were tuned Wednesday to the first day of public impeachment hearings in the House. (Photo by Megan U. Boyanton/Cronkite News) 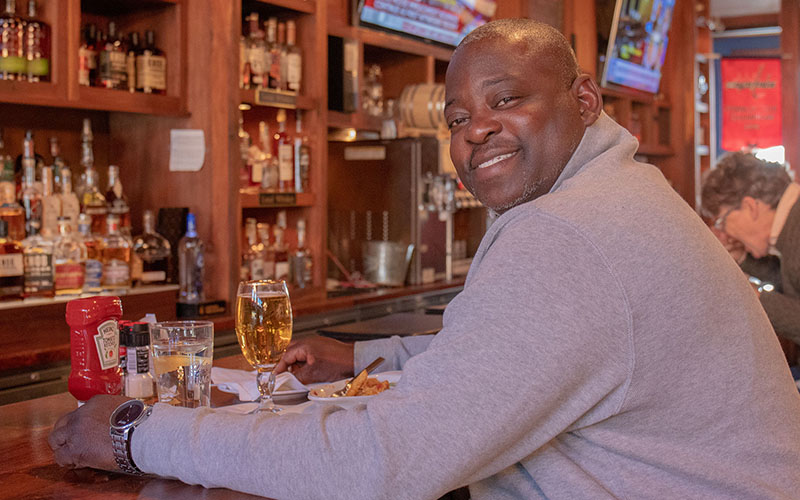 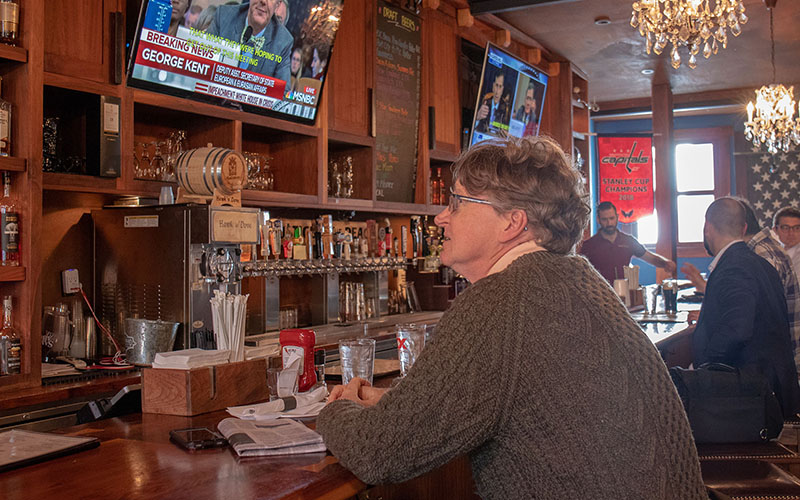 Bill Kerwin, 61, watches the impeachment hearings from a stool at the Hawk ‘n’ Dove bar, even though he thinks the proceedings are slow-moving. (Photo by Megan U. Boyanton/Cronkite News)

WASHINGTON – The much-anticipated first day of open House impeachment hearings arrived Wednesday with none of the drama of recent high-profile events like the Kavanaugh confirmation, with one Arizona lawmaker describing the hearing as “pretty dry.”

That sentiment appeared to be shared at bars around D.C. that opened Wednesday morning and tuned the TVs to C-SPAN, but had only a handful of barstools occupied by early afternoon.

“Frankly, it moves kind of slowly,” said Bill Kerwin, a Columbia, Mo., resident watching the inquiry into President Donald Trump’s behavior from his seat at the Hawk ‘n’ Dove bar on Capitol Hill.

But low-key did not mean low-interest: At least two Arizona lawmakers attended Wednesday’s House Intelligence Committee hearing in person, and legislators on both sides of the aisle had strong feelings about the testimony.

Rep. Debbie Lesko, R-Peoria, said during a break in the hearing, “There’s really nothing there that’s impeachable.”

It was Lesko who summarized the hearing as “pretty dry.” But Rep. Raul Grijalva, D-Tucson, said it is critical to understand the details of the hearings, which often happens without dramatics.

“This is a serious, sober and, to some extent, solemn process,” he said. “People that make that accusation – ‘This is boring, I’m not entertained enough’ – are probably the same people that are ignoring the facts.”

Those concerns were first brought to public attention by a White House whistleblower after a July 25 phone call between Trump and Zelensky, a reformer elected this year who was seeking a meeting with Trump. Ukraine was also waiting for millions in U.S. aid to help fight Russian encroachment.

According to a transcript of the call, Trump asks Zelensky to “do us a favor,” by investigating whether a server from the 2016 election ended up in Ukraine and by probing Hunter Biden’s dealings on the board of a Ukrainian energy company. Biden is the son of former Vice President Joe Biden, considered a likely Trump challenger in the 2020 election.

Most of that information has come out over the last month, as House committees held weeks of closed-door inquiries into the possibility that Trump solicited foreign interference in U.S. elections.

But Taylor added more details Wednesday, when he testified that a staff member recently disclosed details of a July 26 phone call between Trump and European Union Ambassador Gordon Sondland. Taylor said the aide asked Sondland about Trump’s stance on Ukraine, and was told that “President Trump cares more about the investigations of Biden.”

The White House has denied all allegations that there was a “quid pro quo” in what Trump calls his “perfect” conversations with Zelensky. That was echoed Wednesday by Republicans at the hearing like Rep. Andy Biggs of Gilbert, who described the testimony by Taylor and Kent as “underwhelming.”

“There’s no evidence whatsoever,” Biggs said in an interview outside the House hearing room.

That didn’t stop the Union Pub, a bar just a few blocks away, from offering impeachment-themed cocktails like “I Got 99 Problems but Impeachment Ain’t One.” The specialty drinks were exactly what brought Bill Reid into the bar.

“My friend Danny said they had these impeachment drinks here and I wanted to try one,” said Reid, who was visiting from Frederick, Md. He said the hearings were what kept him in his seat.

Across Capitol Hill at the Hawk ‘n’ Dove, Alan Riddick enjoyed a Stella Artois beer and mused over what had happened so far as he watched the hearing.

“It almost seems like it’s President Trump against the world sometimes,” said Riddick, a Washington resident for over a decade. “If this is true, then it’s just not right.”

The pub opened at 10 a.m. Wednesday to serve customers during the impeachment hearings. General Manager Angela Walker said turnout was low, but the “political bar” will continue to host watch parties throughout the rest of the process, adding, “We don’t pick sides here.”

Just down the bar from Riddick, Kerwin spent his lunch hour watching the televised hearing from his stool, even though he felt the proceedings were dragging.

“It’s probably better just to wait and read it at the end of the day,” he said.