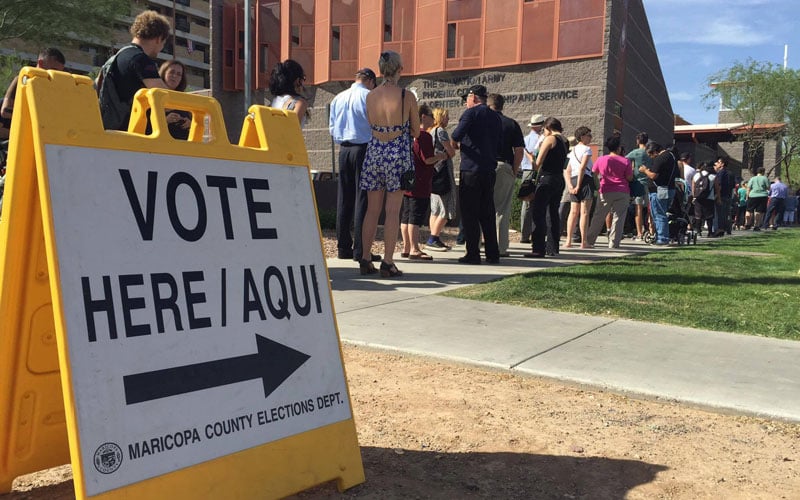 The Democratic National Committee this week identified normally red-state Arizona as one of eight battleground states where it has already started putting people and resources to be ready when the 2020 elections roll around a year from now. (Photo by Miguel Otárola/Cronkite News)

The race between freshman Sen. Martha McSally, R-Ariz., and Democratic challenger Mark Kelly is expected to be one of the most high-profile in the country. Kelly reported raising almost $14 million by October to McSally’s $8.5 million. (Photos by Gage Skidmore/Creative Commons)

WASHINGTON – The Democratic National Committee confirmed this week that Arizona is one of eight battleground states it has targeted for the 2020 elections, already hiring organizers in the state and focusing on suburban and Latino voters.

DNC officials said in a briefing Thursday that the shifting demographics in Arizona, its growing Latino population and declining approval ratings of President Donald Trump put the state in play.

The move is part of what the DNC is calling an “unprecedented” national investment, that began more than a year before the general election, to ensure that the party’s eventual nominee “has a pool of trained, ready-to-hire field talent.”

David Bergstein, DNC director of battleground state communications, said the party is “learning from our lessons in 2016,” when Donald Trump won an upset victory over Democratic presidential nominee Hillary Clinton.

But Trump only carried the state by 3.5 percentage points, and Democratic victories since then have many thinking Arizona is no longer a reliably red state. That threat has been taken up by Republicans as a rallying cry.

State and national GOP groups did not respond to requests for comment this week. But the Republican National Committee said earlier this year that the Trump campaign hired veteran Arizona operative Brian Seitchik in April, a full 18 months before the election.

Arizona GOP Chairwoman Kelli Ward said at the time that the state party will “need a lot of resources, a lot of energy, a lot of ground game” to fight off an expected Democratic threat.

“There is no complacency here on the ground because we know that the Democrats are organized and salivating at the opportunity to turn Arizona blue,” Ward told the Washington Examiner then.

That’s the goal of the DNC’s new program, “Organizing Corps 2020,” that trains college students and recent graduates with a goal of 1,000 full-time organizers by June. Bergstein said the party has already deployed 25 organizers to Arizona and expects to deploy more in the second and third waves of hiring.

The party also plans to work closely with Latino and Native American groups in the state, working to “define and localize” what they call Trump’s record of broken promises.

Jason Rose, a political analyst, said Democrats saw an opportunity in Arizona after Trump was nominated, but they got involved in the state too late. Things began to turn around in 2018, when Arizona elected Democrat Kyrsten Sinema to the U.S. Senate, and are expected to continue next year with Democrat Mark Kelly, a well-funded challenger to Sen. Martha McSally, R-Ariz.

“This time, you have Sen. Sinema’s victory. You have Mark Kelly performing very well in the state,” Rose said. “You have some really favorable trends and some incredibly strong candidates and so it would be political malpractice for the Democrats not to compete.”

James Thurber, founder of American University’s Center for Congressional and Presidential Studies, agreed that Democrats have an opening in the state.

“Arizona, because of their voting patterns and the results from prior elections, show that what was once a longtime Republican state can now go either way,” Thurber said. “The demographic trends present an advantage to the Democrats.”

But that doesn’t mean it will be easy, he warns. Democrats will have to work to get the higher voter turnout they will need to win the state, he said.

“They need to have vigorous voting organization to have a voter turnout, the Hispanic population in particular,” Thurber said. “It’s too close to call in Arizona … but they’re trying to have the state lean more Democratic.”

Matt Grodksy, a spokesman for the Arizona Democratic Party, pointed to recent elections as evidence that the shift is already happening.

“We are coming off of a historic night in Tucson where we elected Democrat Regina Romero the first Latina mayor the city has had since its founding,” Grodsky said. “Democratic mayors now control nine cities across our state, we are on the cusp of flipping our state legislature, and Trump’s approval rating is underwater.”

Besides the 2018 election of Sinema, DNC officials also point to victories last year by Democrats Katie Hobbs and Kathy Hoffman in the races for secretary of state and state school superintendent, respectively.

But while he sees an opportunity for Democrats, Rose is not ready to call Arizona a purple state for presidential politics just yet. The day is still far off, he said, when Arizona can tilt an election, “like Ohio or Pennsylvania or Florida that is a traditional toss-up state.”

“If Arizona goes Democrat, it’s likely to be a wave or near wave year for the Democratic nominee, meaning Arizona is coming along for the ride,” Rose said.