After a nail-biting finish to last week’s playoff match, Phoenix Rising FC hopes to continue their historic year to advance in the USL Playoffs.(Photo by Joe Hicks/Getty Images)

SCOTTSDALE – As Solomon Asante stood on the sideline, all he could do was pray that Phoenix Rising FC would win a penalty shootout against Austin Bold FC. Coach Rick Schantz didn’t want to substitute the likely United Soccer League MVP before the shootout, and he said Asante selflessly told him, “We will be fine.”

“I know that people will talk about it,” Asante said about the Saturday game. “As the leader, you need to think about the team. I was having some cramps and fatigue, so I decided to encourage my teammates to go win it.”

Rising FC won the first penalty shootout in franchise history, 8-7, to advance to the Western Conference Semifinal in the USL Championship Playoffs against fourth-seeded Real Monarchs on Friday. Real Monarchs are the only team to beat Rising FC at Casino Arizona Field in USL play this season. 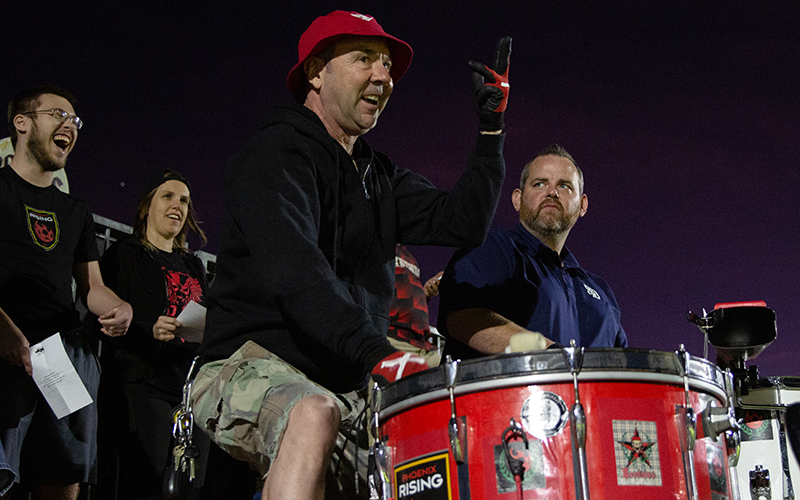 Emotions swirled throughout the match, but those emotions were heightened in the penalty shootout. Rising FC was on the brink of elimination.

Defender A.J. Cochran sat ninth in the shootout order so he didn’t expect to take a penalty kick. Instead, he converted the match-winning penalty kick.

“It was wild,” Cochran said. “I remember walking up and the ball wasn’t there, so I had to stand there at the top of the 18 for like an extra 30 seconds.

“I wanted to be the hero. I know what it feels like to miss earlier in the year and for our team to lose against New Mexico (in the U.S. Open Cup). I didn’t want to repeat that.”

Schantz felt a mixture of emotions on the sideline. He was disappointed when the whistle blew in extra time because he believed there was more time to play. He was also nervous because Austin Bold FC goalkeeper Diego Restrepo had made so many fantastic saves.

“Throughout the entire time to be 100 percent honest, I had to go to the bathroom so bad,” Schantz said. “I was standing there and I was thinking, ‘Can we hurry up and get this over with? I am going to die.’

“We won, then all of a sudden I didn’t have to go to the bathroom anymore. I know I didn’t go, but something changed. It was a really calm moment for me, instead of, ‘Oh yeah, we did it,’ it was immediately … I just knew we were onto the next game.”

Asante wants to win for the fans, but he said a penalty shootout isn’t the ideal route.

“We prayed that it doesn’t repeat itself because the fans don’t like it at all,” Asante said. “They just want us to win, so we are going to do everything possible to score a goal. We don’t want PKs again.”

With a rematch looming against Real Monarchs on Friday at Casino Arizona Field, Asante said Rising FC will attack the match with the same tactics but an improved mindset.

“I think that we aren’t going to change anything,” Asante said. “We are going to play our game and we are going to stick to our tactics. I think we have one of the best coaches, and he knows what to do.”

Despite the loss in the previous matchup, Schantz said the lesson was “perfect” for Rising FC in terms of mental preparation. At the time, Rising FC already had the USL regular season title clinched, but the loss against the Real Monarchs showed that the team has to be ready.

“I know that the players were disappointed we weren’t able to capitalize on our opportunities and they got a couple of lucky breaks, and it leaves a really bad taste in their mouths,” Schantz said. “I think there are a lot of guys that want to get that revenge.”