PHOENIX – Cheesy pizza boxes, plastic grocery bags and grass clippings are a big reason more cities in Arizona are cutting back or even eliminating long standing recycling programs. But contamination isn’t the only factor at play.

China, which for decades has bought the bulk of U.S. recycling, including most plastics and paper products, threw the industry into disarray early last year when it severely cut back on imports of recycled materials because too much of it was contaminated with food and other nonrecyclable materials.

“The problem is that people are sending too much waste in their (China’s) direction,” said Charles Rolsky, a postdoctoral environmental student at Arizona State University. “Out of all plastics created, truly only about 9% has been recycled, and most of it ends up in the landfills.”

China’s move has forced cities to rethink what they can afford to recycle. Mesa is the latest to cut back on what it recycles because of the rising costs, and Surprise, in the northwest Valley, suspended its program in August because of contamination.

“It has to do with the way that our commodities are being processed now,” Shane Wilhite-Valdez, maintenance manager at Waste Management’s Northwest Regional Material Recovery Facility, told Cronkite News. “So before we essentially had an open door where China was accepting everything; now they’re very, very limited on the products that they’re taking.” 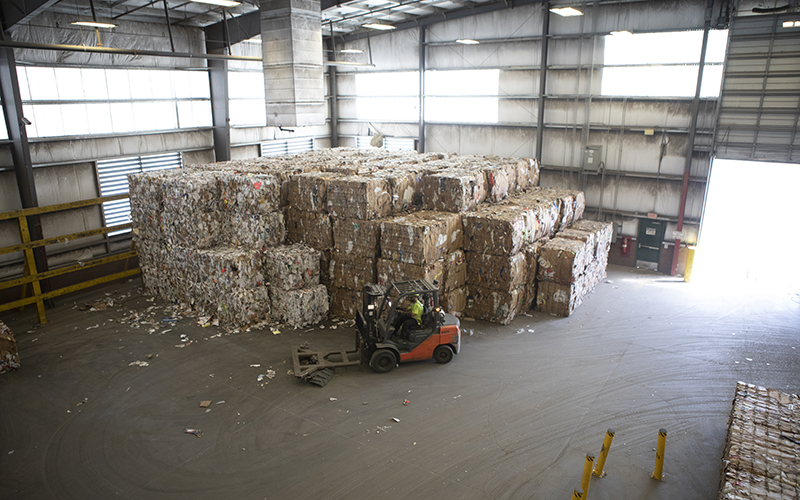 Surprise is the latest Arizona city to suspend its recycling program due to the rising costs. Here, bails of processed recycled materials are stacked up at Waste Management’s Northwest Regional Landfill in Surprise. (Photo by Dylan Simard/Cronkite News)

Contamination is also an issue at home

Recycling plants, also known as material recovery facilities, contain conveyor belts that move materials up and down multiple floors, enormous magnets pull metals from waste, and sanitation workers in gloves manually sort through recyclables and nonrecyclables. All of this manual sorting comes at a cost, and when residents contaminate their recycling, it costs their city money.

This shift comes at a time when Americans – after decades of campaigns explaining the benefits – finally have embraced recycling, according to the latest data from the Environmental Protection Agency. Yet, according to that same EPA data, Americans generated 262.4 million tons of waste in 2015, up 60% from 1985.

Surprise is the latest Arizona city to suspend its recycling program due to the rising costs. Globe, Sierra Vista, Casa Grande have also suspended their programs within the last year.

More cities in Arizona are making huge cuts to their recycling programs, which means less-frequent curbside pickups and tighter restrictions on accepted materials. Mesa announced on social media in October that more restrictions are coming. Tucson has also made huge cuts to its program, and Kingman consolidated its seven recycling dropoffs into one location in July.

Putting a lid on the recycling market

Cities pay for curbside recycling through contracts with Waste Management, Right Away Disposal and similar companies. Contracts signed a few years ago were drawn up during a thriving market for recyclable materials, when China had no restrictions on what it would take.

China now buys only a small fraction of what it bought in 2016, and it plans to end all imports, Wilhite-Valdez said.

“As of 2020, recycling is going to be completely cut off where they (China) will no longer be taking recyclables from the United States,” he said.

“Before we essentially had an open door where China was accepting everything,” said Shane Wilhite-Valdez of Waste Management. “Now they’re very, very limited on the products that they’re taking.” (Photo by Dylan Simard/Cronkite News)

“If they’re expecting to get this delivery of plastic and they get a bunch of plastic mixed in with trash, it becomes a problem,” said Rolsky at ASU. “Why would they (the Chinese) want to keep buying it if then it takes them extra manpower to separate all that trash out and then move on with the recycling process?”

A study published in Science Advances suggests China’s policy will displace an estimated 111 million metric tons of plastic waste by 2030, which is nearly equivalent to all of the plastic waste that has been imported globally since 1988.

The recycling market continues to drop, and questions about the future of recycling continue to rise. Until the market becomes more affordable for cities, you can expect the suspension of programs to continue, and perhaps more cities will do the same thing.

Gent knows Arizonans are concerned. “On social media and in person, residents are asking, ‘What can we do to get recycling back? What can we do to make it work?’ If we could eliminate contamination, we might even go back to generating revenue again.”

Tempe Vice Mayor Lauren Kuby agreed. “We are trying to educate our residents, too. If we can divert waste away from recycling and into the landfill, that will save money.”

Smaller cities don’t have the resources to continue to participate with rising costs. “We used to make $600,000 off of our recycling,” Kuby said, “and now we lose about $500,000, so it is incredible that it has turned into a million dollar swing.”

Surprise hopes to resume curbside recycling once the market becomes affordable again. Until then, residents can drop off their materials at the Northwest Regional Material Recovery Facility in Surprise on Saturday mornings.

If you live in a city that has also suspended curbside pickup, contact the public works director for information on where you can take your recyclables.

The best thing residents can do is to stop contamination. Check your city’s website for information on what can and cannot be recycled. Put your materials in loosely in your container. If your city has suspended curbside pickup, find a drop site near you.