Ken Cuccinelli, the acting director of U.S. Citizenship and Immigration Services, told a House panel that when his agency proposed doing away with medical deferral actions, it was only following immigration law that Congress set. (Photo by Vandana Ravikumar/Cronkite News) 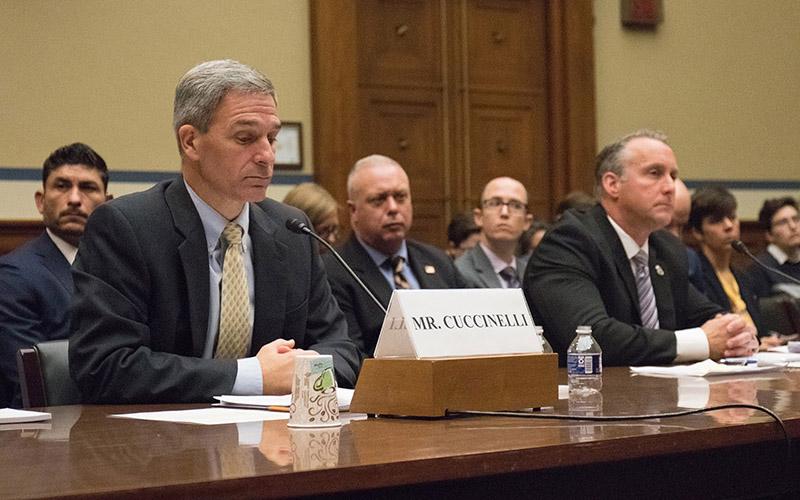 WASHINGTON – The acting director of Citizenship and Immigration Services insisted to a House panel that there are no new plans to end “medical deferred action,” but Democrats called the administration “cruel” for considering the notion in the first place.

Wednesday’s House Oversight Committee hearing came nearly two months after USCIS reversed its plan to do away with policy that lets immigrants with life-threatening ailments stay in the U.S. to get treatment.

In angry exchanges, Democrats in the hearing accused acting USCIS Director Ken Cuccinelli of forcing life-and-death decisions on immigrants with little thought about the impact. Cuccinelli shot back that his agency was only enforcing the laws that Congress has passed when it proposed the change.

“We have limited resources,” Cuccinelli said of the drain of reviewing medical deferred action requests. “There are trade-offs.”

The ire reached its pitch when Rep. Debbie Wasserman Schultz, D-Fla., said Cuccinelli and President Donald Trump “don’t want anyone who looks or talks differently than Caucasian Americans to be allowed into this country.”

“You want to block all immigration and make life harder for immigrants, and you have demonstrated that you will pursue this heinous, white supremacist ideology at all costs, even if it means making critically ill children collateral damage in the process,” Wasserman Schultz said.

A visibly upset Cuccinelli said he is not a white supremacist “and neither is the president,” before going on to say the attempted policy change, as well as other USCIS policies, was not intended to specifically target immigrants of color.

“That is utterly false,” Cuccinelli said.

In early August, USCIS stopped accepting requests from immigrants to have their deportations deferred because of medical reasons. And people who already had such protection got letters from USCIS telling them they had a month to leave the country, or be called to immigration court to face the removal process.

The change was made without notifying the public or Congress, but it immediately sparked a public outcry that forced the administration to back off by September.

“What little we’ve been able to learn about this policy indicates that it was undertaken in haste, without any effort to ascertain what its health- and life-threatening effects would be on the people affected,” said Rep. Jamie Raskin, D-Md.

He and other committee members criticized USCIS and Immigration and Customs Enforcement for rolling out the policy without first publicizing it, shocking families when they got letters telling them of the change. Rep. Jimmy Gomez, D-Calif., called it an “approach that has lead to panic and confusion, and I believe it was unacceptable.”

“That’s the process, that’s the way you did it, even though it was dealing with people’s lives?” Gomez asked.

Cuccinelli said everything USCIS does “deals with people’s lives in various ways,” and that the agency does not typically notify the public of administrative policies that are not the result of new law.

“You said that you did not notify the public because this was merely an ‘operational change,'” Gomez said. “Do you really think telling critically ill children and their families that they have 33 days to leave the country or face deportation is merely an operational change?”

Cuccinelli later conceded that the policy’s implementation was “a mistake.”

“If I had to do it over again, I would not have applied it to people who had been pending, if for no other reason than to ease the information out and not surprise them with a change in circumstance,” he said.

The decision to spring the plan on immigrants was decried as “cruel” by Rep. William Lacy Clay, D-Mo.

“What would you recommend those parents do when they receive that letter?” Clay asked. “Do you want them to leave the country – pack up their stuff, take their sick child and go? All in the middle of them being there, trying, hoping and praying to save their child?s life – how cruel. Really?”

But Cuccinelli repeatedly pointed to lawmakers that there is no official deferred medical action policy on the books and that doing away with it was merely the agency complying with the law as written. If lawmakers are not happy that USCIS was looking to enforce existing immigration law, he said, then Congress should change those laws instead of asking federal agencies not to enforce them.

Rep. Alexandria Ocasio-Cortez, D-N.Y., conceded that Congress “hasn’t done its job in many respects” with regard to crafting immigration law, but that it can’t take all the blame.

“It’s been a failure for a very long time,” Ocasio-Cortez said. “But we still have created a mission for USCIS through which the agency can interpret the spirit of this law.

“It says right here on USCIS’ website that the agency’s core values are integrity, respect, innovation and vigilance,” she said. “I don’t understand how deporting critically ill kids is consistent with any of these values.”