Juniors Eli Toelle, Hugh Gallagher and the rest of the Brophy League of Legends team prepares to take on Dobson High School in the first match of the inaugural AIA fall esports season. (Photo by Sophia Briseño/Cronkite News) 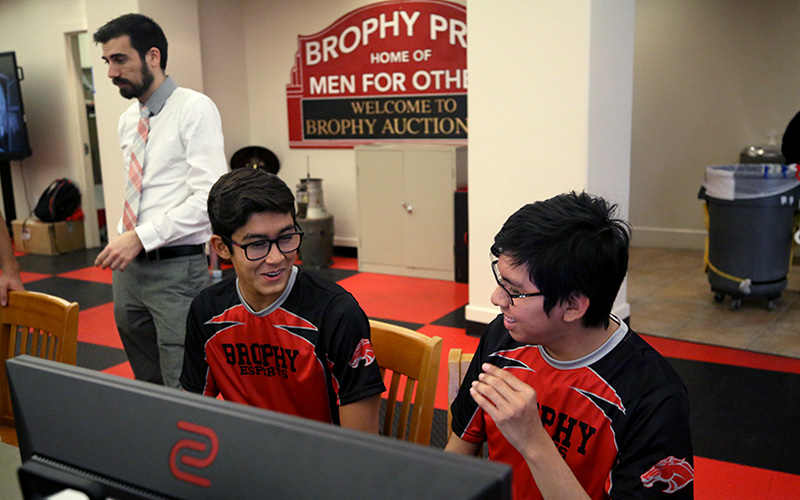 Sophomore Justin Krueger and junior Jaymz Wallen are among those on the Brophy League of Legends team that has been practicing in its esports lab on campus a few times a week in preparation for the first season of AIA sanctioned esports competition. (Photo by Sophia Briseño/Cronkite Sports)

PHOENIX – League of Legends and Rocket League joined cornerstone sports such as football and basketball as mainstays of the fall and winter season for Arizona high school sports on Monday.

In a major move forward for the high school esports community, the Arizona Interscholastic Association has partnered with PlayVS to run an esports league, AIA director of business and development Brian Bolitho said. The change from former partner Legacy Esports gives the AIA everything the organization needed to launch the league after it was delayed in the spring.

“First and foremost, they had the licensing agreements with the game publishers,” Bolitho said. “Without that, there isn’t any games we can provide to the schools to play. They also have a nice platform that is streamlined for the schools.”

The state sanctioned league will include a full length regular season and playoffs for both Rocket League and League of Legends, with schools across Arizona competing for the title of State Champion. Bothilo said the league will function a little differently than traditional sports.

According to Bothilo, PlayVS will use a “hybrid swiss schedule” for the two esports titles this semester. Schools will receive their first two weeks of games randomly. After week two schools will then receive their next set of three games only this time the schools they play against will be ones with same or similar records. One more set of games will be available after week five with the same concept. The teams with the best records at the end of week eight will advance to the playoffs.

Bolitho said PlayVS, which recently received a $50 million investment, will handle scheduling for the season. He added that this isn’t the first state sanctioned high school esports league PlayVS has organized, but it is unique.

“What makes us different is that we have a website platform at Azpreps365.com that we will put this out there like we do our other sports,” Bothilo said. “It will be branded with its own ‘Arizona Epreps’ page, and that’s what is going to make esports a little bigger in Arizona compared to other states.”

Some Arizona high schools have already made significant investments in esports. Brophy College Preparatory, for example, has created an esports lab on campus to show it is all in on esports.

Shawna Khan, the program director and coach for the League of Legends team, said the administration believes participating in esports would create a great tradition for the school and didn’t hesitate to pay for new computers. She also said the response on campus has been overwhelmingly positive. Even the older faculty on campus ask her how the team is doing.

“All the faculty and staff are so supportive,” Khan said. “They are always asking questions and really want to help.”

To help get the team ready for competition, Khan organizes practice a couple of times a week after school.

“Right now, our teams are just practicing in public games, but our team needs a little bit more competition,” Khan said. “We will be looking to organizing scrimmages with other schools.”

As the team heads into its first season, many players don’t know what to expect in terms of competition. Despite this, Will Warner, a member of Brophy’s League of Legends team, has measured expectations.

“We are playing at a pretty good level and our ranks have only been increasing since we started,” Warner said. “We don’t know how many schools are playing, but if there are 40 schools and all of them are pretty good, I think we can at least make it to the quarterfinals.”

Looking toward the future, the same games will be featured again in the AIA’s spring season. While there is no official news on the addition of any new games, Bolitho said if PlayVS can get the licensing agreements, the AIA will consider adding Super Smash Brothers Ultimate to the spring season. The Board of Directors previously approved the game before the spring season was delayed.