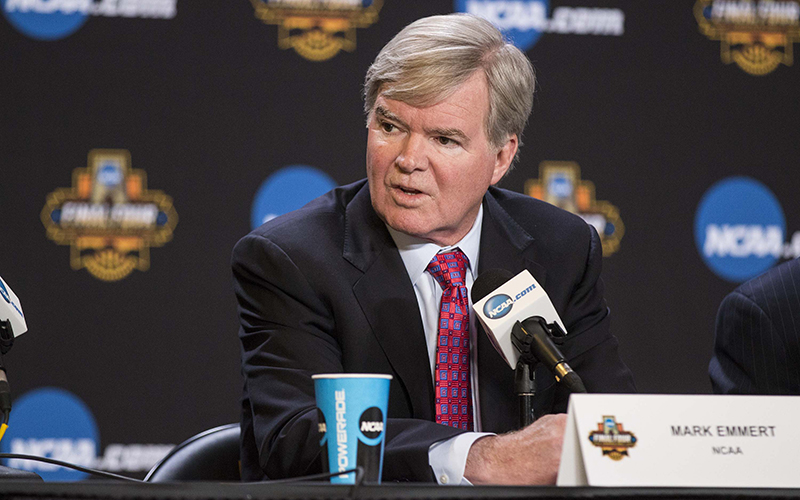 NCAA President Mark Emmert knows his organization will be the center of debate now that it has opened the door for athlete endorsements. (Photo by Blake Benard/Cronkite News)

PHOENIX – Jayden Daniels, in his Sun Devils gear, appearing on a TV commercial for BoSa Donuts? That may finally be a possibility.

In a unanimous vote, the NCAA Board of Governors voted to permit students participating in athletics the “opportunity to benefit from the use of their name, image and likeness in a manner consistent with the collegiate model,” and has directed all three NCAA divisions to begin preparing their policies and bylaws to be updated.

Although nothing had officially changed as of Tuesday, the NCAA is hoping each of its three divisions creates new rules that would go into place “immediately, but no later than January 2021.”

The Board of Governors said in its press release that modernization should be focused on, among other things, assuring student-athletes are “treated similarly” to other students unless there’s a “compelling reason,” making the distinction between collegiate and professional opportunities clear, and reaffirming student-athletes are students first and not university employees.

This action was based on the recommendations from the NCAA’s Federal and State Legislation Working Group, who the NCAA said has worked for the past several months talking to a variety of people in and out of collegiate sports, as well as legislators, and will continue to work over the next six months.

When implemented, the rules will allow athletes to make money off their names, images, voices and likenesses from outside entities. One of the most well-known examples is the video games EA Sports used to make about college athletics, which have not been made since 2014 because of these compensation issues. But these will also allow individual athletes to do endorsements with any business willing to compensate them for it, no matter how big or small. 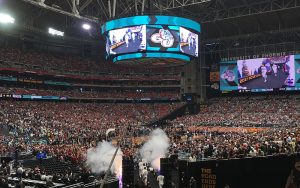 The NCAA will allow athletes to profit from their name, image and likeness in a major shift of philosophy for the organization .(Cronkite News photo)

Although the NCAA states that this is done in its “continuing efforts to support college athletes,” some in and around the sports world believe the organization is only doing what it has to in response to the governmental push for change.

“It’s entirely reactionary,” said Nathan Kalman-Lamb, a lecturing fellow at Duke University who teaches social inequality and sports. “There’s absolutely a zero percent chance that we would have seen the announcement we saw today if there wasn’t this cavalcade of states that have followed – and also not just the states, but we have federal legislation in the offing, too.

“The NCAA has literally been forced to do this. They’re doing this because they fear that if they don’t do this, there’s going to be chaos is different states are going to have different legislation.”

In a question and answer document released in conjunction with the announcement, the NCAA said it has not outright rejected the Olympic model, but will consider elements “consistent with the college environment.” It also said it still opposes the recently passed California Senate Bill 206, saying it “likely is unconstitutional,” and said it is “critical” that collegiate athletics be regulated nationally.

But there has been some pushback to today’s announcement from government officials. U.S. Senator Richard Burr (R-N.C.) tweeted that he would be introducing legislation that would make the scholarships student-athletes receive taxable as income if they choose to “cash in” on their names, images or likenesses.

While many have disagreed with Burr’s stance, including North Carolina State Senator Jeff Jackson, there has been some caution to the news even from within the NCAA. The Division I Student-Athlete Advisory Committee (D1SAAC) advocated for more “consideration” for the non-revenue sports in a statement.

“We believe it is possible and necessary to reform the rules around name, image and likeness, but any such reform, whether it be at the organizational or governmental level, must include these considerations so as to not dismantle the entire system,” the D1SAAC said.

But the D1SAAC did acknowledge the “outsized impact” of the major revenue sports of men’s basketball and football, which these upcoming rule changes seem to be directed toward allowing. For Arizona State coach Herm Edwards, although he isn’t entirely sure what changes will eventually come, he’s for changes that “help the sport.”

“As adults, we get to make the decisions, so make an adult decision, look at the long-term of sports, and say, ‘Is this the best way to go?'” Edwards said. “And if it is, then make some rules and sanctions, and say, ‘These are the rules we all got to live by,’ and every coach and player will understand it and we’ll all live by it.

“It’s all evolved. I mean pro football, for god’s sake, those guys used to have second jobs. So it’s all evolved. And you can’t go hide and say, ‘it’s the good ol’ …’ It’s not the good ol’ days. It evolves. We evolve as a society. It’s part of it, and if you don’t do that, then you’re hurting the game. So just do what’s right, because right’s always right. Right’s going to be right until eternity, and that’s all we’ve got to do.

“Just do the right thing. Those guys will figure it out.”