Prescott resident Kayla Mueller was 26 when she was killed in Syria while a captive of the Islamic State. The White House Sunday announced the killing of Islamic State leader Abu Bakr al-Baghdadi in a military operation dubbed Operation Kayla Mueller. (Photo courtesy CNN) 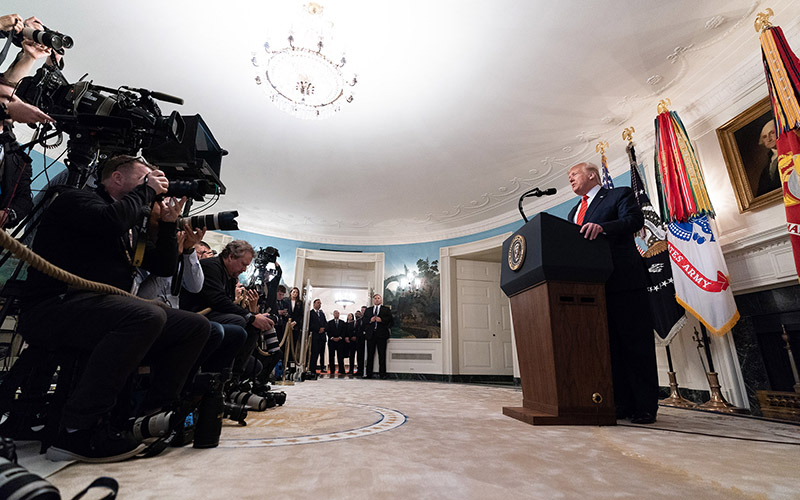 President Donald Trump at the White House Sunday announcing that U.S. forces had killed Abu Bakr al-Baghdadi, the leader of the Islamic State the night before, in an operation named for one of the group’s victims, Arizona native Kayla Mueller. (Photo by Shealah Craighhead/The White House)

WASHINGTON – One official called it fitting: The military operation that tracked down and killed the leader of the Islamic State this weekend was named for Kayla Mueller, a Prescott native who was killed while being held by that group in Syria in 2015.

Operation Kayla Mueller led to the death of IS leader Abu Bakr al-Baghdadi, who was accused of taking part in the rape, torture and killing of Mueller, a Northern Arizona University graduate doing humanitarian work in the region when she was abducted in 2013.

Prescott Mayor Pro Tem Billie Orr said this weekend’s news rekindled memories of Mueller as an “amazing young woman” who “captured the hearts of many at a young age.” In 2016, the city worked with the Prescott Kiwanis Club to open the “Kayla’s Hands” public park in her memory.

“I had the honor of meeting Kayla Mueller,” Sen. Kyrsten Sinema, D-Ariz., said in a written statement Monday. “She committed her life to humanitarian causes and her legacy will never be forgotten.”

Mueller’s parents could not be reached for comment Monday, but told the Arizona Republic that the news of al-Bagdhadi’s death brought some closure. Marsha Mueller, Kayla’s mother, also said the family will not have peace until all their questions are answered.

“I still want to know, ‘Where is Kayla?’ and what truly happened to her and what aren’t we being told,” she told the Republic.

Kayla Mueller was working in Turkey in 2013 when she accompanied another aid worker into Syria on what they expected would be one-day trip. But while there, they were captured by the Islamic State, which was on its way to establishing a so-called caliphate that sprawled across large parts of Syria and Iraq.

The U.S. government reported 18 months later that Mueller was killed while being held.

Rep. Paul Gosar, R-Prescott, who worked with the Mueller family trying to secure Kayla’s safe return, said in a statement Monday he was grateful to President Donald Trump for honoring her memory by naming the operation for her.

“May God grant peace to the family of Kayla Mueller, and may Abu Bakr al-Baghdadi rot in hell,” said Gosar, who said the operation was “fittingly” named for Mueller.

Other members of Arizona’s congressional delegation echoed Gosar’s praise for the soldiers who carried out the mission, and they welcomed Baghdadi’s death.

“Incredibly grateful to the special forces team who carried out the raid in Syria against the dangerous and well-known leader of ISIS,” tweeted Sen. Martha McSally, R-Ariz, using another name for the Islamic State.

Rep. Tom O’Halleran, D-Sedona, issued a statement calling the operation “a critical development in the ongoing fight to defeat ISIS and eradicate their extremist acts of terror.”

Trump announced the Saturday night death of Baghdadi in a White House news conference on Sunday, in which he gave a detailed, vivid retelling of how the raid unfolded.

“When we landed with eight helicopters, a large crew of brilliant fighters ran out of those helicopters and blew holes into the side of the building, not wanting to go through the main door because that was booby-trapped,” Trump said. “It was something really amazing to see … as though you were watching a movie.”

Trump said Baghdadi “died like a dog, he died like a coward. He was whimpering, screaming, and crying,” details if the raid he later said he highlighted to dissuade others from joining the Islamic State group.

Before her humanitarian aid work, Mueller studied Politics and International Affairs at NAU. Her alma mater posthumously inducted her into the university’s hall of fame in 2015 and established a scholarship in her honor for students planning to work in humanitarian relief.

The university described Mueller on its website as “an inspiring young woman whose selflessness and courage motivates all of us to be – and to do – better.” 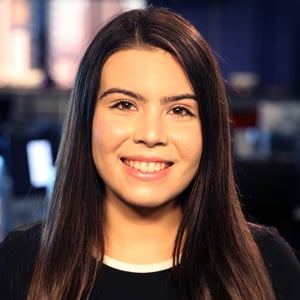