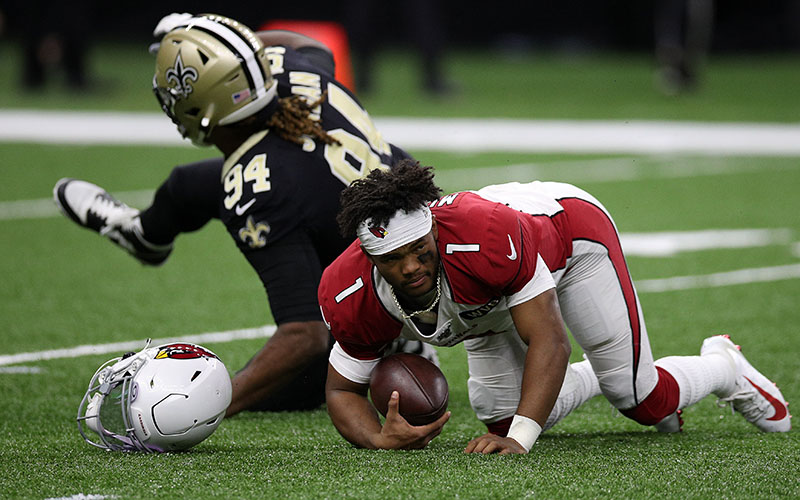 Despite the pressure he receives from opposing defenses, Cardinals quarterback Kyler Murray has impressed his team with his ability to hold on to the ball. Here he is sacked by the Saints’ Cameron Jordan. (Photo by Chris Graythen/Getty Images) 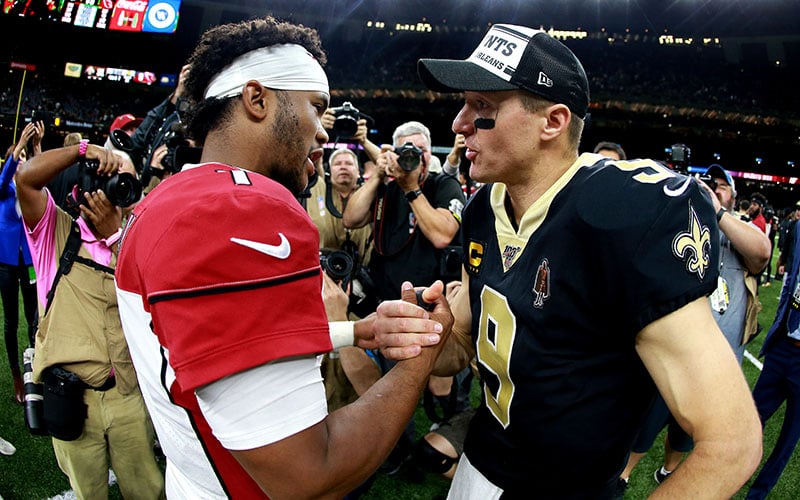 Murray (left) has improved over the course of the season but a goal is to display the type of consistency demonstrated by New Orleans quarterback Drew Brees. (Photo by Sean Gardner/Getty Images)

Equipped with unflappable confidence, he has handled the stresses of the NFL season with ease, always appearing firmly in command on and off the field. Yet as he and the rest of the Cardinals recover from their 31-9 loss Sunday to the New Orleans Saints, even Murray is a little shocked at his response to the defeat.

As the team prepares for a Thursday night matchup with the division-leading San Francisco 49ers, Murray reports that he has avoided the usual malaise that consumes a team following a blowout loss, and instead is almost giddy as he looks ahead to this week’s matchup.

“I feel good, I feel better than I have throughout the whole season,” Murray said at Monday’s press conference. “I don’t know why. I’m actually ready to get on the field again.”

Murray’s excitement may stem from the dramatic improvement Arizona has shown across the board, as the Cardinals have won three of their last four matchups including an impressive road victory two weeks ago against the New York Giants. The offense in particular has exhibited significant progression, displaying an enriched fluidity and understanding across the unit as they continue to gain a better understanding of coach Kliff Kingsbury’s offense.

“I think it was a struggle preseason, just because we weren’t doing everything that we’re doing (now),” Murray said of how the offense has improved. “Then kind of finding ourselves throughout those first three games. … We kind of started to kick it up. Then with the guys going down you just got to find a way to get it done, and I think that’s where we’re at right now, is just finding a way to get it done.”

The offensive strides taken by the Cardinals go hand-in-hand with stronger play from Murray, who has shown steady improvement throughout the first eight games of his young career. While statistically his most recent performances appear similar or even worse to that of his previous starts, Murray’s ability to hold onto the ball and keep his team competitive has been, in Kingsbury’s opinion, one of the more important characteristics of the rookie’s play.

For Kingsbury, Sunday in particular was a shining example of just how far Murray has come. A matchup with the Saints in New Orleans is no easy task, and Kingsbury acknowledged just how daunting a task it can be for a rookie quarterback. As the duo lays the groundwork for games extending well past the 2019 season, Kingsbury knows the importance of moments like these for Murray.

“He’s competing at a high level, making plays,” Kingsbury said. “There’s a couple we wish he had back but overall, I continue to see progression. These are great lessons playing one of the best teams in the league on the road. He’ll learn from all of it.”

Murray’s next learning experience comes quicker than usual, as the team looks to hand the visiting 49ers their first loss of the season this Thursday. As the Cardinals work to build off their hottest stretch of the 2019 season, Murray knows just how intense the first prime time matchup of his career will be.

“Yeah this should be fun,” Murray said of Thursday’s game. “Wearing all black, Thursday night, real first primetime game for us. Just really trying to go out there and obviously put on a show and protect home.”