His unique personality was what made him a star of HBO’s Hard Knocks, but his television persona is only a glimpse of the man known as Bob Wylie. (Photo by: 2018 Nick Cammett/Diamond Images/Getty Images) 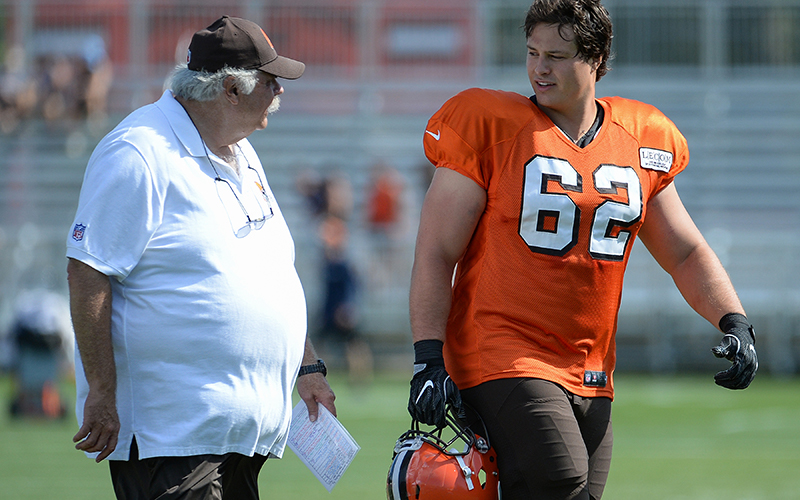 Bob Wylie’s passionate coaching style not only earned him notoriety on HBO’s Hard Knocks, but it also earns the trust and respect of many players that he coaches. (Photo by: 2017 Nick Cammett/Diamond Images/Getty Images)

CHANDLER – Before Bob Wylie became a viral sensation on the HBO show “Hard Knocks,” he put together a long and storied career as a professional football coach. Wylie worked for six Division I schools including Syracuse, two Canadian Football League teams and eight NFL organizations, including the Cleveland Browns in 2018, and the Arizona Cardinals in 2004.

For the 2019 football season, Wylie finds himself in a new and unexpected coaching role with the Hamilton High School football team.

Wylie moved back to his home in Chandler from Cleveland to continue rehabbing a dislocated right ankle, broken right leg and injuries to his left knee, suffered while coaching with the Browns. Out driving one of his three Maseratis one day, he passed by a Hamilton football practice and something prompted him to park the car, step out and watch.

“One of the coaches came over and they thought I was scouting the kids,” Wylie said. “But the head coach knew who I was, and he said, ‘You can do whatever you want to do.” 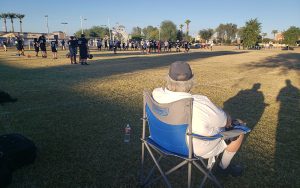 Wylie watches Hamilton High Practice from a chair. He said he has been impressed by the Hamilton coaching staff. (Photo by Tyler Henry/Cronkite News)

It didn’t take Wylie long to take head coach Mike Zdebski up on his offer, and he began working as an observer with Hamilton, keeping his watchful eye on the team’s practices and games.

“I think the kids like the idea of having a pro football coach overlooking them, and whatever I tell them they absorb,” Wylie said. “The coaches do the same thing, I sit in the coaches meetings and I tell ‘em, ‘This is what I saw today, whether you guys like it or not and it’s up to you whether you want to use it or not.'”

Incorporating Wylie’s insight was an easy decision for the Huskies coaching staff. Mark Tucker, Hamilton’s offensive line coach, has benefited the most from Wylie’s experience.

“The guy’s been an offensive line coach in the NFL for 40-plus years,” Tucker said. “He doesn’t overstep his bounds, he just tells you what he sees and gives you things to make a part of your toolbox as a coach. It’s been a great combination having him around.”

While Wylie has made many invaluable contributions to Hamilton this season, it’s his attention to detail that has garnered the most praise.

“It’s the technical parts of the game, the small details that sometimes people forget about that he’s done the most with,” Zdebski said. “Game and practice management, line spacing, identifying coverages, working with the offensive line on posture, stances and recovering fumbles. It’s the little details.”

Wylie had equal praise for the Hamilton coaching staff, which he said put in a ton of work getting the team ready for the season before his arrival.

“I thought (Zdebski) was very organized,” Wylie said. “This is not a day-to-day operation, it’s all been thought out what he wants to get done and he stays with the plan. Last year, the team wasn’t winning games, but he stayed with the plan, and now you see the plan starting to come together.”

The impact of Zdebski’s plan and Wylie’s contributions have already been felt, as Hamilton, a team that went 3-7 last season, is off to a 7-1 start and is ranked No. 7 in the open division.

“We’re not beating ourselves this season,” Zdebski said. “Things like turnovers, penalties and overall execution has been a lot better this year.”

With just two more games in their regular season, Hamilton is in a good position to reach Arizona’s first open playoff, which will feature the top eight teams battling it out for one state title, regardless of classification.

As for Wylie’s future, after this season he hopes he can find his way back into an NFL coaching role.

“If I can get back I want to get back,” he said. “The thing you have to understand about the NFL is there are only 32 seats, and whatever one you have is the best one.”

The Huskies will face the Perry Pumas this week and finish their season with a game against top-ranked Chandler. Hamilton last won a state title since 2012. 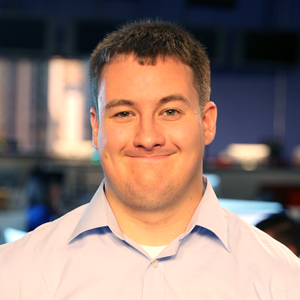