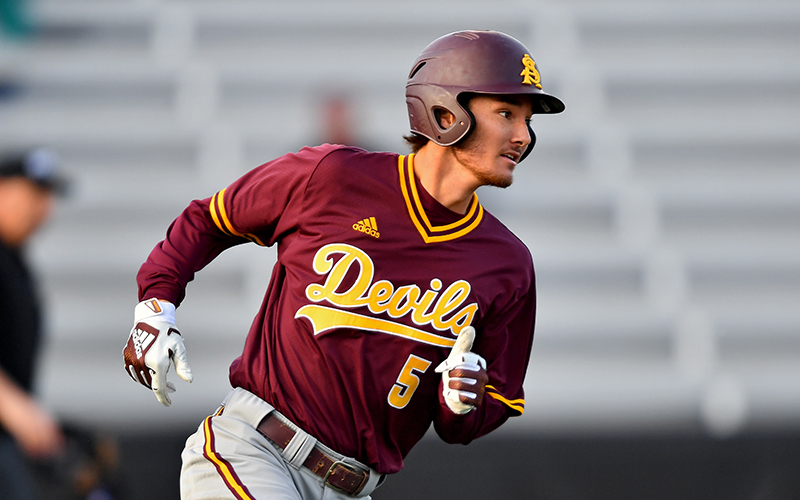 PHOENIX – Two years ago, the only baseball players that Spencer Torkelson and Alika Williams could compete against in the fall were each other and their fellow Sun Devils.

Arizona State is hosting USA Baseball’s Professional National Team for its final exhibition scrimmage of the fall, serving as a practice game in the national team’s run-up to the Premier12 tournament and possible Olympic qualification.

“I think it’s a wonderful, wonderful event for us to see where we are because there’s not better competition that we’re going to play all year,” Arizona State baseball coach Tracy Smith said. “I think it’s going to be neat for the fans to see not only their Sun Devils, but also the team representing their country.”

It’s been a year and a half since the NCAA adjusted its rules to allow baseball teams to play exhibitions against other teams without counting those games against the spring schedule. Torkelson and Williams see the value in using the exhibition games to acclimate to the college level.

“I wish we had this my freshman year,” Torkelson said. “Getting the in-game experience, with fall ball and playing against your own team, you can only do so much. Being able to face other competition and getting the vibe in the dugout, (figuring out) what to do on game day, it’s huge. It’s a big stepping stone for freshmen.”

“My freshman year, we were kind of just thrown in, and I was going at 100 miles per hour,” he said. “I couldn’t slow the game down at all. It’s really good for the young talent we have.”

Arizona State has already used these games to its advantage in two fall seasons, playing three games against professional teams, but Smith believes this matchup will have the added benefit of allowing the baseball industry to see many of the Sun Devils’ top MLB Draft prospects face the best arms they’ll see this season.

“We’ve got some pretty high-profile guys (that the scouts) are going to get a look at and a real evaluation against,” Smith said. “As much as it’s a benefit to us, it’s probably more of a benefit to the professional side of it because there’s no better chance for them to get a true evaluation of our players.

The game also provides Torkelson and Williams with a reunion of sorts. They spent their summer playing for USA Baseball’s Collegiate National Team, playing games in North Carolina, Taiwan and Japan and rooming together for the majority of the time. In his second summer with the team, Torkelson tied for the team lead with two homers, but perhaps his most important role on the summer was being an uplifting spirit for his fellow Sun Devil. 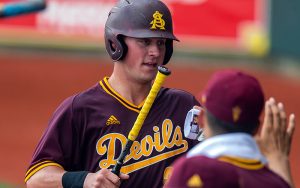 Top prospect Spencer Torkelson may be focused on preparing for his 2020 season by facing Team USA, but he is excited about the idea of potentially joining USA Baseball in the future. (Photo by John Korduner/Icon Sportswire via Getty Images)

Williams admitted that he was “pretty nervous” at the beginning of the summer, but was able to calm himself down with a simple reminder.

“I realized that it was just baseball,” Williams said. “As soon as I realized that, I just played the same game I always played and it went pretty well.”

Pretty well may be a bit of an understatement. Williams led the Collegiate National Team with 19 RBIs and batted .364 with a .545 slugging percentage and 24 total bases, all second-most on the team. He also had multiple hits in six of the 14 games he played.

“He had a great summer, and it was really fun watching him develop,” Torkelson said. “I knew he had it in the field, but his bat is really coming around.”

For USA Baseball, the game at Phoenix Municipal Stadium offers a chance to get some live action in ahead of the Premier12 competition run by the World Baseball Softball Confederation (WBSC). Team USA will play in Group A in Guadalajara, Mexico from Nov. 2-4. If the U.S. finishes in the top two among the Dominican Republic, Mexico and the Netherlands, it will advance to the Super Round in Tokyo from Nov. 11-16.

With Japan (as host) and Israel (winners of Africa/Europe tournament) already in, the top finisher from the Americas and from Asia/Oceania in the Super Round will fill half of the remaining spots at the 2020 Summer Olympics in Tokyo. If the U.S. does not earn its spot in the Premier12 competition, there will still be at least one more opportunity to reach the Olympics, with the first qualifier scheduled to take place in Arizona in March.

Smith was always going to root for Team USA, but competing against the team augments his support. He also thinks that their success could help get a certain two-time Collegiate National Team get selected for a return trip to Tokyo next summer.

“I think certainly Spencer has always been an eye for them, but with the timing and the way the roster is built, he may be a prime candidate for that,” Smith said. “They’ve got some pretty smart people over there, and they’ll make decisions that are in the best interest of our country and their program. But it’s not out of the realm of possibilities.”

As for Torkelson, he admitted he hadn’t put much thought into the possibility. But in what is sure to be a busy 2020 for the projected No. 1 overall pick in the MLB Draft, he’d welcome the opportunity to represent his country another time.

“That’d be unbelievable,” Torkelson said. “I’ve still got a college season to play, (but) that would be the most insane thing of my life. By far.”