An umpire is outfitted with an iPhone and earpiece before a game at Salt River Fields on Oct. 18, 2019, in Scottsdale, Ariz. This allows the ABS system to communicate with the umpire about each and every pitch thrown. (Nicholas Aguilera/Cronkite Sports) 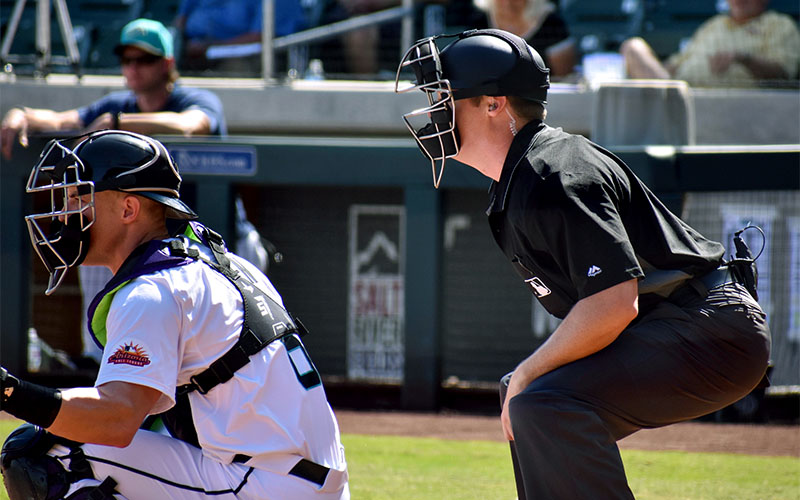 An umpire monitors an at-bat with the ABS communication attached at his lower back on Oct. 18, 2019, in Scottsdale, Ariz. During games, an official monitoring the ABS system sends a message to the umpire about whether the last pitch thrown was a ball or strike. (Nicholas Aguilera/Cronkite News) 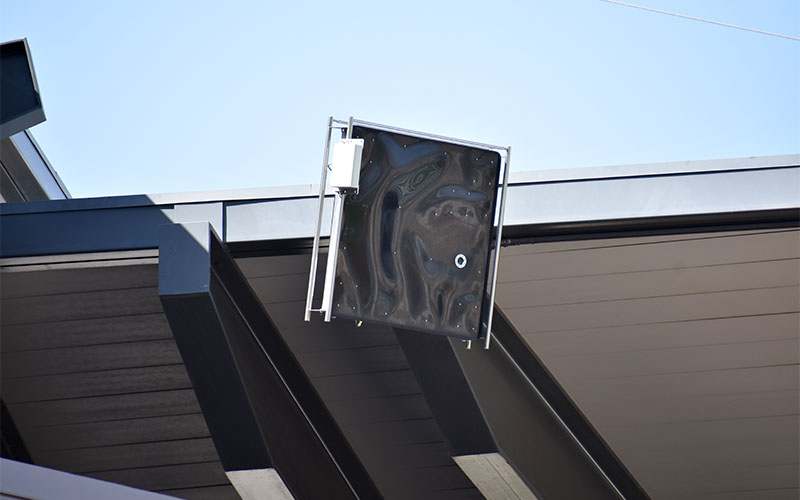 SCOTTSDALE – The 1987 movie “RoboCop” warned us of a future in which robots take over and police our every action.

It’s starting to look as if the future that the classic film depicted has arrived – at least in the Arizona Fall League.

During the 2019 AFL season, Major League Baseball tested out an automated ball-strike system, or ABS for short, for the first time in an MLB-affiliated league. Commonly known as “Robo Ump,” the ABS system was first tested in the independent Atlantic League before finding its way to Salt River Fields – the only stadium in the AFL equipped with the system and home to the Salt River Rafters and the Scottsdale Scorpions.

ABS works by using TrackMan radar technology, similar to what is used for StatCast data that is available in all MLB venues. ABS tracks the ball through the strike zone and the umpire behind the plate is outfitted with an iPhone and an earpiece. An official monitoring the system communicates immediately to the umpire whether the last thrown pitch was a ball or strike.

The system has caused a lot of confusion among players. After years of dealing with the human element of umpires behind the plate, many have had to adjust to what is now a never-changing strike zone with ABS.

“My first reaction was, ‘No, this thing is horrible. I don’t like it.’ because it was just so new. I told some other guys that if I pitch to it consistently, I might feel differently,” said Rafters pitcher and Tampa Bay Rays prospect Drew Strotman. “I’m kind of just a traditionalist by nature, so I like the human error element of baseball, too. It does get frustrating with the calls you do get called strikes.”

On the mound, pitchers found that they had to change their mentality when facing hitters. With a set strike zone, they wouldn’t necessarily get the same calls they would expect from human umpires.

“It definitely makes you sit back and think about if you have to re-evaluate the way you’re going to pitch,” Strotman said. “You’ve got to stop worrying about trying to hit such a specific spot because you might not get rewarded for hitting your spots all the time, and kind of just make the pitches as good as possible.

“As a pitcher, if you get ahead in the count and you’re going to go in on a hitter … the catcher sets up in, and you hit a spot – but you’d miss the zone by a millimeter, even though the catcher’s set up there (and) catches it well –typically, you’d get rewarded in traditional baseball and it’s a strike.”

Catchers behind the plate also had an adjustment period with the system that some Salt River players lovingly refer to as “Karen,” the robot character from “SpongeBob SquarePants.” While it makes a catcher’s job simpler it also diminishes a skill that makes a good catcher so valuable: framing pitches.

“It takes away an aspect of catching because we’re doing everything we can to present the ball, the pitch, in the best way possible to the umpire,” said Brian Serven, a Salt River catcher and Colorado Rockies prospect. “If it does make its way to the bigs, I think it will make the whole framing aspect obsolete. I think it takes away a part of a job that an umpire does and a part of the job that some excel at and some aren’t as good at.

“It takes away an aspect of what we work on every single day. The time that you can spend receiving, you can work on hitting. That’s one of the things we work on the most is receiving and pitch framing. All that time that you devote to that, you could work on your swing, on blocking or throwing. I think it makes your job a little bit easier because you don’t have to worry about making that pitch look as good as possible.”

One of the main gripes hitters had with the strike zone was with strikes called at the top and bottom of the zone. While most agree that the calls to the left and right have traditionally been correct, some feel as if the zone vertically had become a little stretched.

“In and out is pretty well done,” said Royce Lewis, a Salt River infielder and Minnesota Twins top prospect. “I think up and down (in the zone) is the only part where they’re trying to figure it out, where a curveball might break at the top late and catch the top part of the zone. I think with that zone, I’m sure they are technically strikes or they’re clipping the zone, but as far as human nature, an umpire that’s human would realize that that’s not a hittable pitch with someone that’s throwing 98 and has a breaker at 80.”

“There’s been some at the top of the zone that it feels like it’s way too high,” he said. “Maybe that’s the machine not functioning during the fall or maybe some of us don’t realize how tall the strike zone actually can be.”

While the ABS system may make more appearances in the minor leagues in 2020, don’t expect “Karen” to be making calls in the big leagues anytime soon.

“I don’t think Mike Trout would appreciate some of those curveballs dropping in on him,” Lewis said.