Rep. Raúl Grijalva, D-Tucson, said outside the Capitol Wednesday that his bill, the Hardrock Leasing and Reclamation Act, is about modernizing an “antiquated law.” (Photo by Kailey Broussard/Cronkite News) 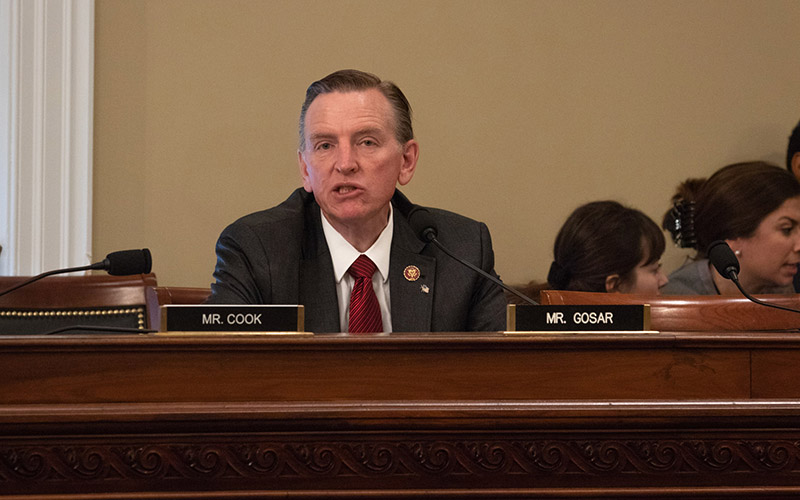 WASHINGTON – A House committee gave preliminary approval Wednesday to an overhaul of a 147-year-old federal mining law that supporters called “antiquated,” while opponents called the update a “point-blank” blow to the mining industry.

The Hardrock Leasing and Reclamation Act would protect national parks and tribal areas from being leased for mining, increase mining royalties and create a fund to clean abandoned mines, among other measures. The bill’s sponsor, Rep. Raul Grijalva, D-Tucson, said it is “about bringing mining into the 21st century.”

But Republicans on the House Natural Resources Committee blasted the bill as a threat to the mining industry. Rep. Paul Gosar, R-Prescott, said called it little more than a politically motivated bill that has no chance of getting through the Senate or signed by the president.

“It is clear what the true motive of my colleagues is with this bill: To put every mine in the United States out of business,” Gosar said before the committee vote on the bill.

“For my entire life, I’ve seen the mining industry ignore concerns from tribes and local communities, and I have listened to the same industries scream bloody murder any time anyone threatened to make them play by the same rules as other industries,” he said.

In a news conference before the hearing Wednesday, Grijalva said his bill merely brings hardrock mining regulations in line with those for industries such as coal and natural gas, which face tougher regulations.

“You can’t regulate cellphones based on the Pony Express,” he said. “You can’t do what was done then, now. But we continue to do it.”

The bill would impose a minimum 8% royalty on mineral production at already existing mine sites and a 12.5% royalty on mines with permits issued after the law takes effect, unless the company has a small miners lease. It would also bar hardrock mining from sacred sites, National Conservation System land and wilderness study areas.

But while supporters touted the environmental benefits of the bill, critics said it could backfire, noting that many clean-energy technologies rely on hardrock minerals that would be affected by the proposal.

“In our world, we need critical minerals now more than ever,” said Rep. Rob Bishop, R-Utah, and the ranking member on the committee.

Gosar submitted letters of opposition on behalf of national and state groups, including the Arizona Mining Association, and argued the bill would lead to increased reliance on other countries, threaten national security and stunt sustainability initiatives.

But the committee rejected amendments by Gosar and Rep. Garret Graves, R-La. Gosar’s amendments would have invalidated the act if it led to reliance for minerals on countries hostile to the U.S., or if collecting royalties threatened the economy or national security.

“This isn’t an attempt to reform and get more royalties,” Gosar said before the vote. “This is to kill the industry at point blank.”

The committee voted largely along party lines to send the bill, unamended, to the full House.

It is the latest in years of proposed hardrock mining reforms, with recent attempts not even getting out of committee. The last proposal to make it out of the House died in the Senate in 2007.

Sen. Tom Udall, D-N.M., has introduced a companion bill that is awaiting hearing by the Senate Energy and Natural Resources Committee.

But Bishop said this year’s attempts will suffer the same fate as previous ones.

“This is a bill that’s not going to be signed by the president, it’s not even going to be heard in the Senate. It’s going nowhere at all,” he said.

But Grijalva, backed by advocates and other lawmakers in front of the Capitol Wednesday, said he is confident the bill will draw enough bipartisan support to pass.

“This law is not about ending mining. It’s about bringing mining into the 21st century,” Grijalva said. “It is about ending the free ride that the mining industry has had since 1872.”