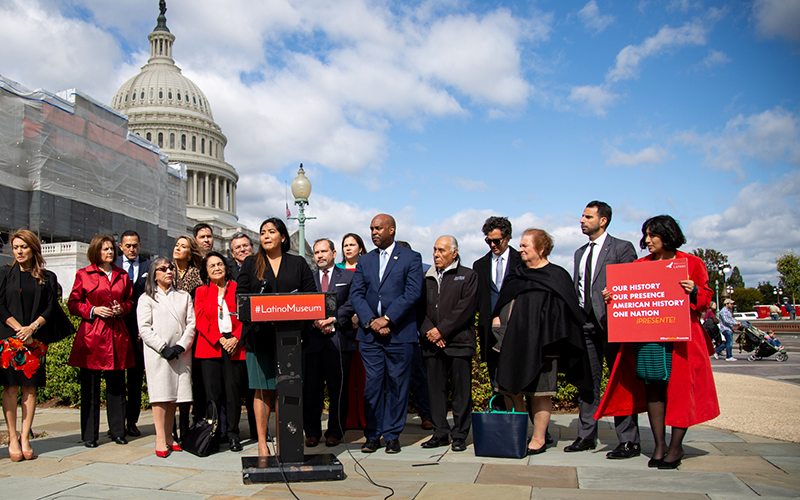 Activists gather outside the Capitol to rally in support of a bill that would create a Museum and Latino American history. (Photo by Harrison Mantas/ Cronkite News) 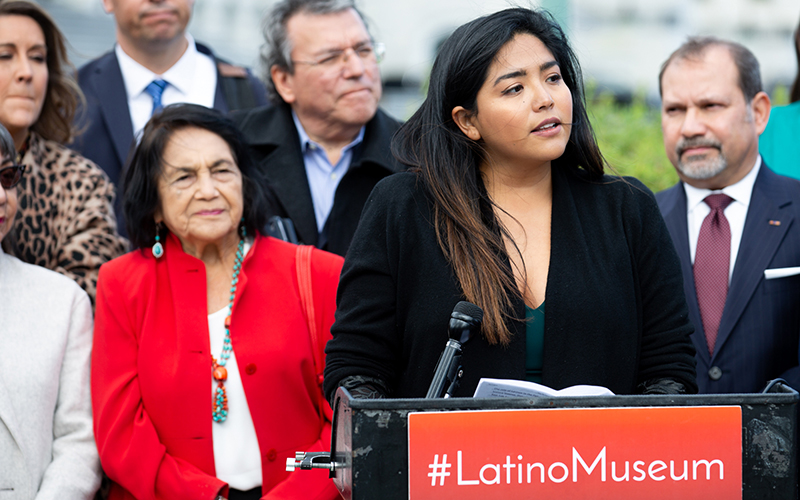 WASHINGTON – The dream of a national museum dedicated to the Latin American experience took one step closer to reality Thursday, as lawmakers and advocates touted a bill that they think has a good chance of putting a museum on the National Mall.

A building may still be years away, but advocates said it is needed now more than ever.

“The infrastructure of the United States was built by many, many Latinos in this country,” said Dolores Huerta, a civil rights activist speaking at a news conference at the Capitol. “Unfortunately, there’s so many people in the United States of America who think we just got here.”

For Rep. Raul Grijalva, D-Tucson, the museum is a no-brainer.

“I think it’s pretty plain … that this is a gap,” Grijalva said at a House Natural Resources subcommittee hearing on the bill. He said the current political backdrop in the country makes the need for a Latino-American history museum all the more pressing.

“The increased crimes against Latinos and attacks and distortions of the role of Latinos in this country and the rhetoric that we hear from the top office in this country” all point to the need for a museum, Grijalva said. “As full partners in the American story, Latinos need to have their place of prominence.”

With 218 co-sponsors already, the National Museum of the American Latino Act is certain to pass the House. Advocates said they are hopeful of rounding up the needed votes for the bill in the Senate, where a 2008 version of the bill died.

For immigrant rights advocate Julissa Arce, a museum dedicated to Latino-American history is about more than getting a place of prominence on the Mall.

“On August 3rd of 2019, a day that many of us will remember forever, a white nationalist killed 22 people in a Walmart in El Paso,” Arce told a crowd gathered at the Capitol, her voice cracking briefly before she continued.

“Maybe, just maybe if he had learned the full history of Texas … he would not have viewed us as targets, but as fellow countrymen,” she said.

According to FBI Hate Crime statistics, racial and ethnic bias make up the overwhelming majority of hate crimes. Nearly 60 percent of the 7,106 hate crimes reported in 2017 were based on race and ethnicity.

Rep. Ruben Gallego, D-Phoenix, told the committee that for him personally, it is important to see the stories of Latinos represented on the Mall, adding, “it would have a huge impact specifically for my young Latino son.”

Gallego and Grijalva are among the six Arizona representatives co-sponsoring the Latino museum bill. The others include the four other Arizona Democrats and Rep. Paul Gosar, R-Prescott.

The Latino bill is not the only national museum proposal in front of Congress: A bill directing the Smithsonian to create a women’s history museum on the Mall is currently in the House with 293 co-sponsors.

Getting the Latino museum bill through Congress could be the easy part. If the bill passes and is signed into law, the Smithsonian would have to start raising matching funds to build the National Museum of the American Latino.

Speaking after the Capitol Hill rally, Huerta said the museum’s price tag is irrelevant when considering the impact it will have on Latino youth.

“We have to say, ‘Our dignity is priceless,’ and we need to have that dignity, especially for our young people, so they can be proud of their latino heritage, and they don’t have to apologize for it,” Huerta said.