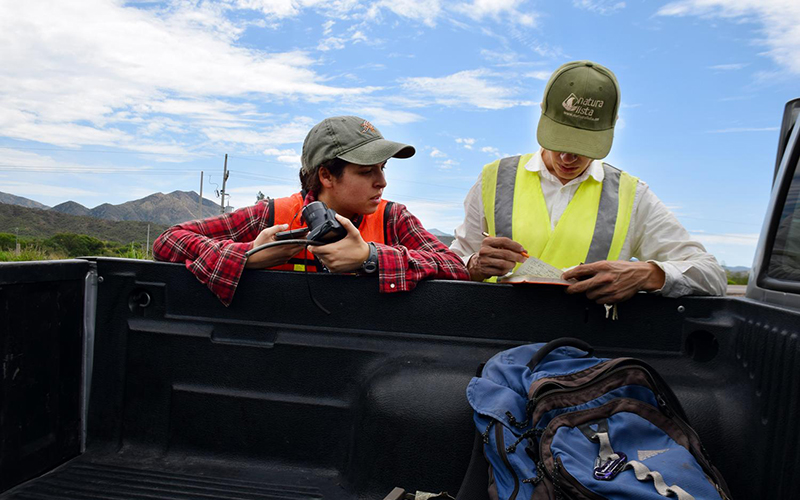 Cecilia Aguilar and Ricardo Felix compare notes after checking for signs of wildlife along Highway 2 near Imuris, Sonora. (Photo by Kendal Blust/KJZZ) 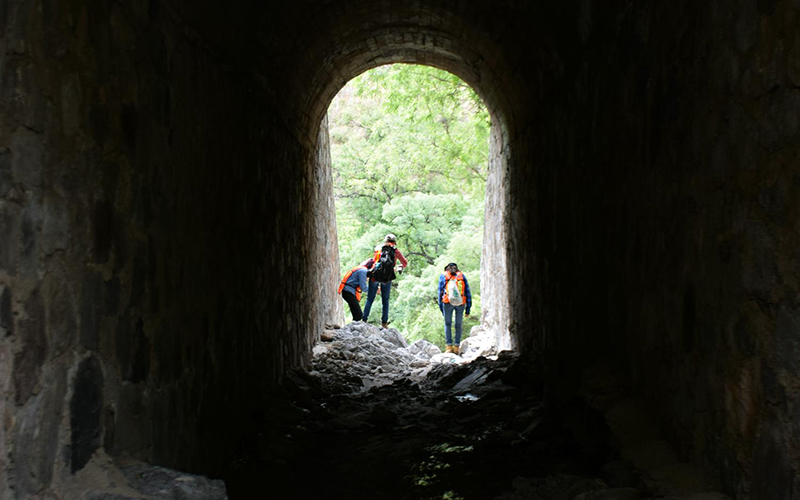 Wildlands Network researchers look for signs of animals. “We want to know which species are using the drainages and which drainages see the most activity,” road ecologist Cecilia Aguilar says. (Photo by Kendal Blust/KJZZ) 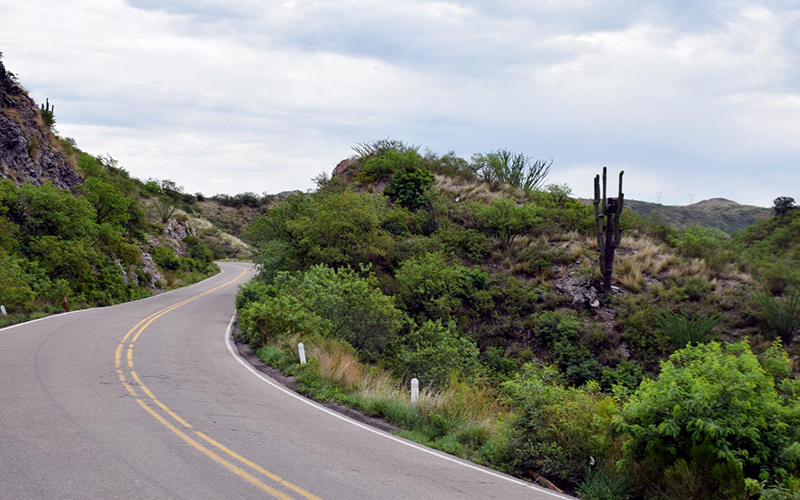 Highway 2 twists through the Sierra Azul, a corridor for wildlife both common and endangered. (Photo by Kendal Blust/KJZZ) 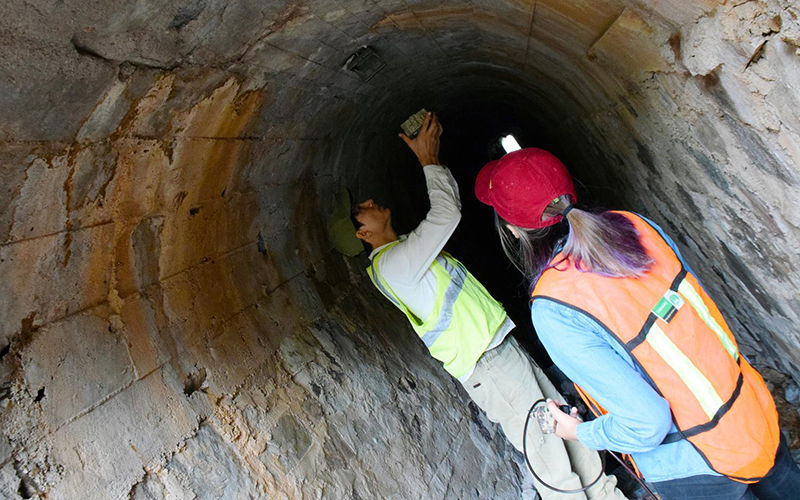 Ricardo Felix adjusts a camera in a drainage beneath a stretch of Highway 2, an east-west roadway that roughly parallels the U.S.-Mexican border. (Photo by Kendal Blust/KJZZ)

ĺMURIS, Sonora – Researchers wait on the edge of Highway 2 as semitrailers thunder past. Ocotillos, organ pipe cactus and mesquites – bright green from monsoon rains – line the cracked, two-lane blacktop as it winds through the Sierra Azul, about 35 miles south of the U.S. border.

When traffic clears, the researchers sprint across the highway and scramble down into a narrow drainage tunnel beneath the roadway to check a camera trap.

“We want to know which species are using the drainages and which drainages see the most activity,” said Cecilia Aguilar, a road ecologist with the Seattle nonprofit Wildlands Network.

Aguilar is working on a yearslong project monitoring roadkill and camera traps along the highway from ĺmuris east to the Sonora-Chihuahua state line to understand where, how and which animals cross the highway – and whether they make it.

Every year, more than 2,000 animals, from beavers and skunks to black bears and coyotes, are hit by cars on this stretch of the highway. But many animals will take passages under, around or over the road if they’re available. So Wildlands Network is lobbying for wildlife friendly highway crossings to be added to sections of Highway 2 that are being expanded.

“The highway is one of the main barriers; the other is the border wall,” Aguilar said, referring to barriers along Mexico’s 1,954-mile border with the United States.

The wall and the highway bisect an important wildlife corridor through the sky islands in southern Arizona and northern Sonora, where jaguars, ocelots and other endangered species, as well as common animals like deer and coyotes, crisscross the border.

“People in Arizona have been increasingly excited about the notion of jaguars,” he noted, but reestablishing jaguar and ocelot populations in the United States requires connectivity between Arizona and Sonora. And Sonora’s few remaining black bears rely on a larger population in Arizona for survival.

Wildlands and other organizations have put a lot of effort into studying and mitigating damage created by border fence construction. But Bravo said Wildlands also wants to mitigate this other barrier, Highway 2.

“The idea is to focus mostly on underpasses,” he said, because they already are a necessary part of road infrastructure.

Rather than building new infrastructure, existing drainages would need to be reconfigured and fencing put up along the highway to direct animals to safe crossings.

But protecting wildlife in this region also will mean constructing some overpasses for larger animals less likely to cross under the road, Bravo said.

“The number of black bears in the region I think merit that investment, the occasional jaguar that passes through,” he said. “And it must be noted that most of the jaguars that have reached Arizona have actually crossed through this corridor.”

Wildlands is working with transportation authorities to include wildlife crossings as part of planned highway expansions.

Legislation requiring wildlife crossings on Mexican highways has been introduced at both the state and federal levels. So far, only Chihuahua has passed a law.

Hope for the future?

Even without a law, however, Bravo suggested that changing the perspective of road engineers who plan highways will help provide safer infrastructure for wildlife. That’s why Wildlands has been holding road ecology conferences and talking to engineering students about the work researchers are doing on wildlife crossings.

Back on the road, researchers drive to El Aribabi Conservation Ranch in Sonora’s Cocóspera Valley to check camera traps just off Highway 2.

Luis Ernesto Robles and his family have owned the ranch for generations.

“We know highways are necessary,” Robles said. “The problem is the way they’re building them.”

Roadways cause a lot of damage in this region, he said, “and the expansion, it’s going to destroy everything. I’m convinced of that.”

But researcher Ricardo Félix said new road projects also can bring positive changes, adding, “We see this as an opportunity.”

Money and resources budgeted for the highway expansion open up the possibility of constructing wildlife crossings, too.

“When I am in the presence of all these different animals on the cameras, it’s always exciting, even the most common animals,” he said. “It’s just exciting to know that they’re there and they’re using the drainages.”

Every shot of coyotes, deer or bobcats crossing under the highway gives him hope, he said, that with safe passages, wildlife will continue to thrive in this region.