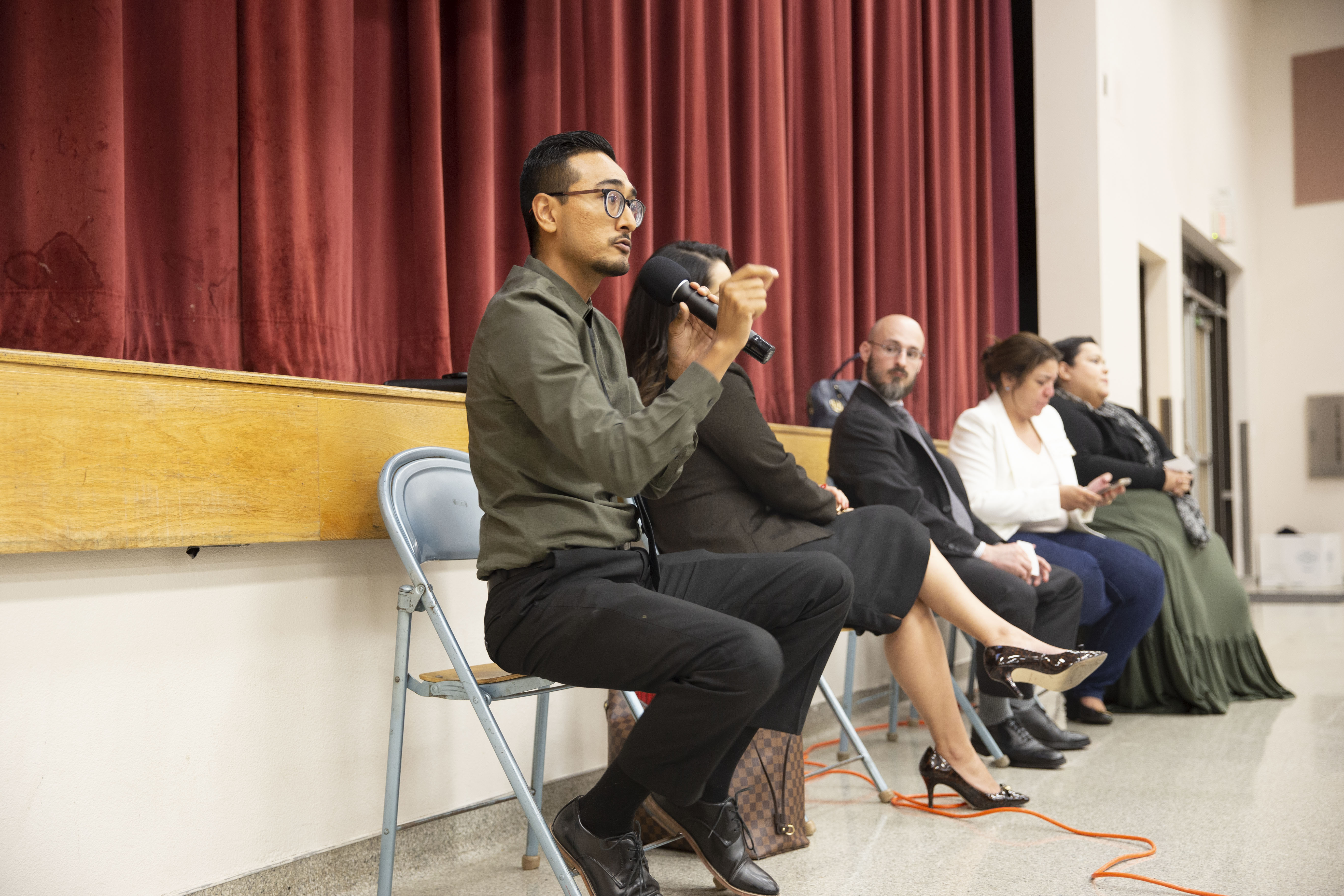 “When I hear that they (immigration officials) don’t count the benefits of those who are dependents of you against you, I believe that’s incorrect,” says Daniel Rodriguez, an immigration and family attorney who spoke at the town hall at Encanto Elementary School in central Phoenix. (Photo by Madeline Ackley/Cronkite News) 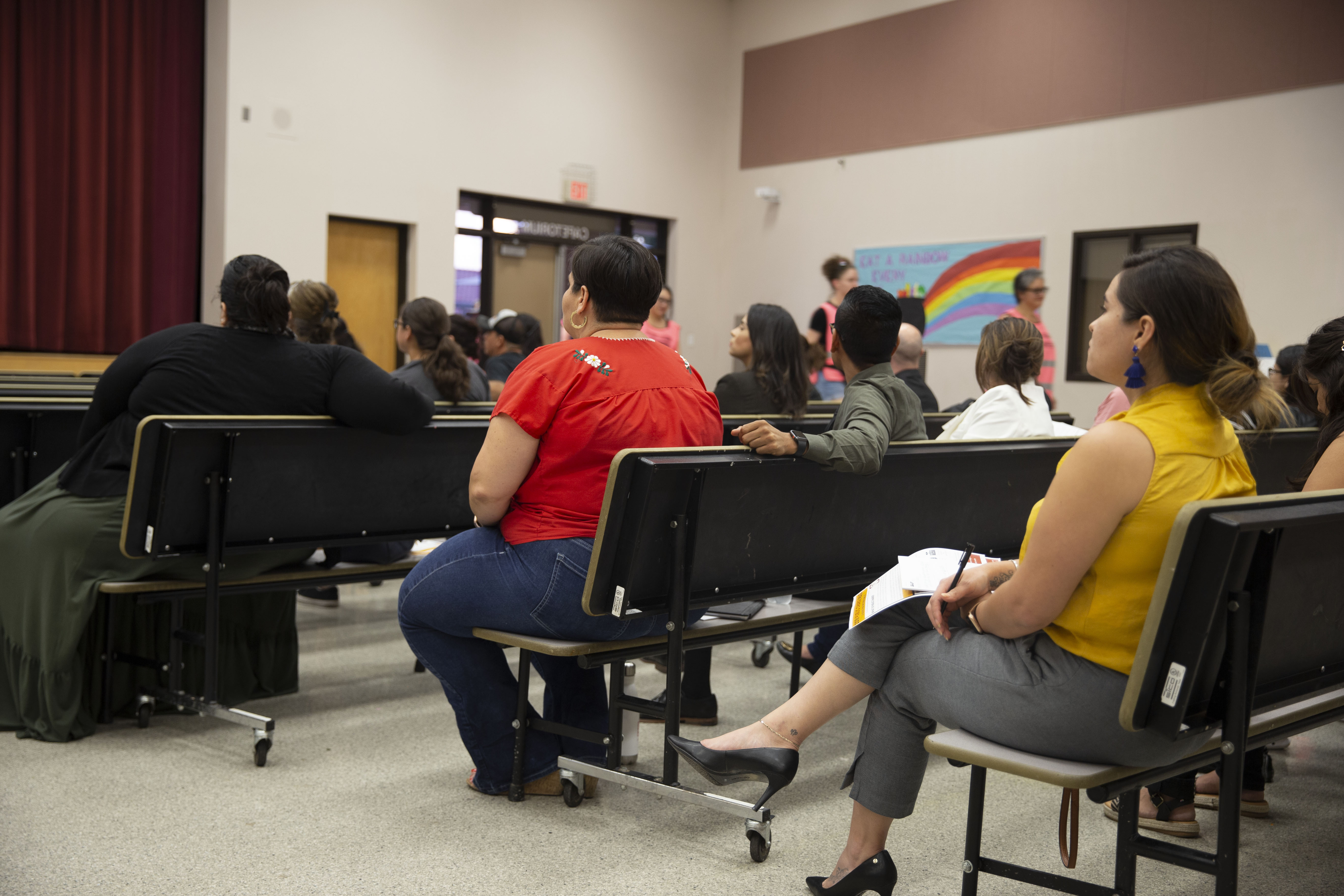 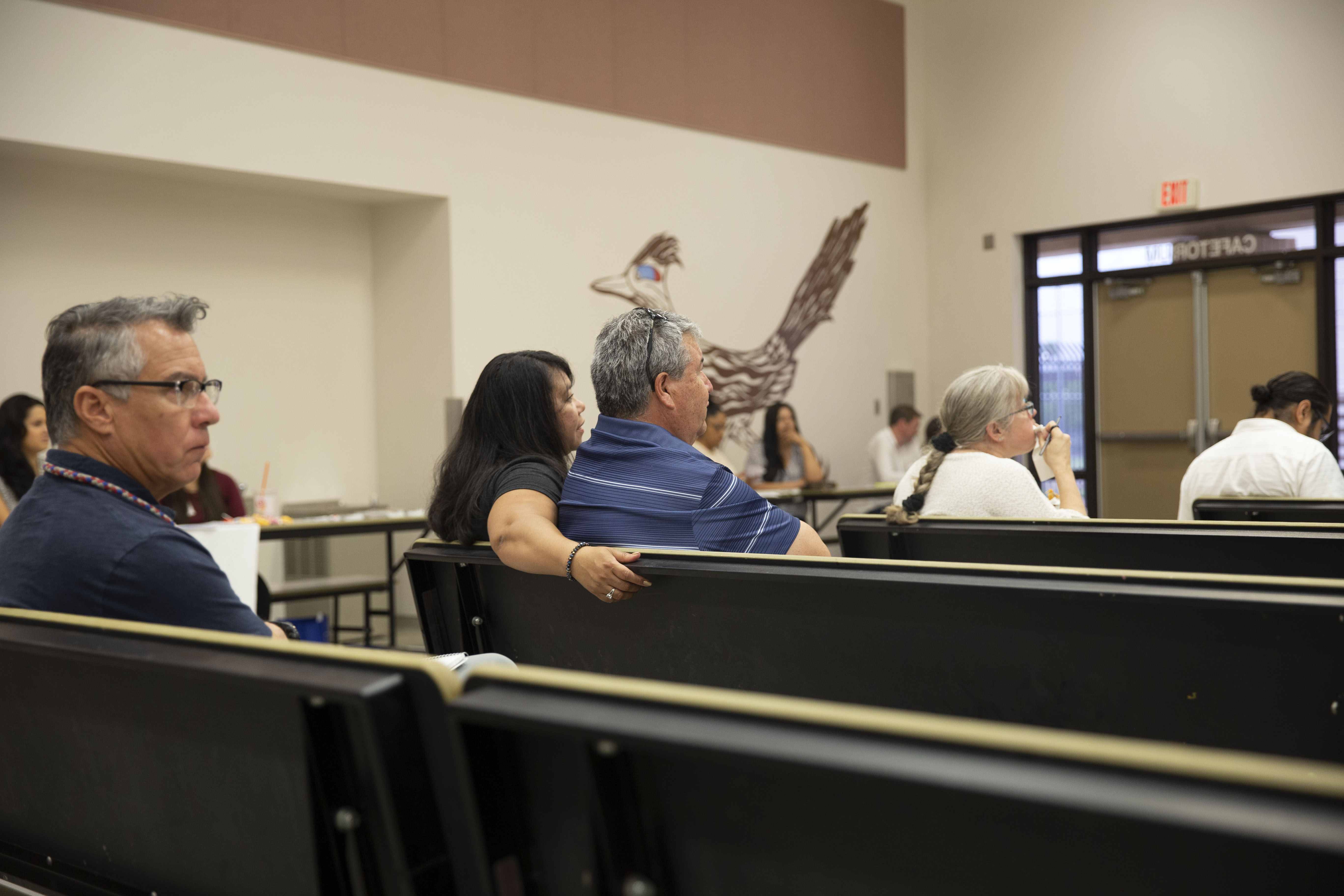 Families and community members listen to a panel of immigration attorneys organized by LUCHA discuss changes to the public charge rule that had been set to take effect Tuesday. (Photo by Madeline Ackley/Cronkite News) 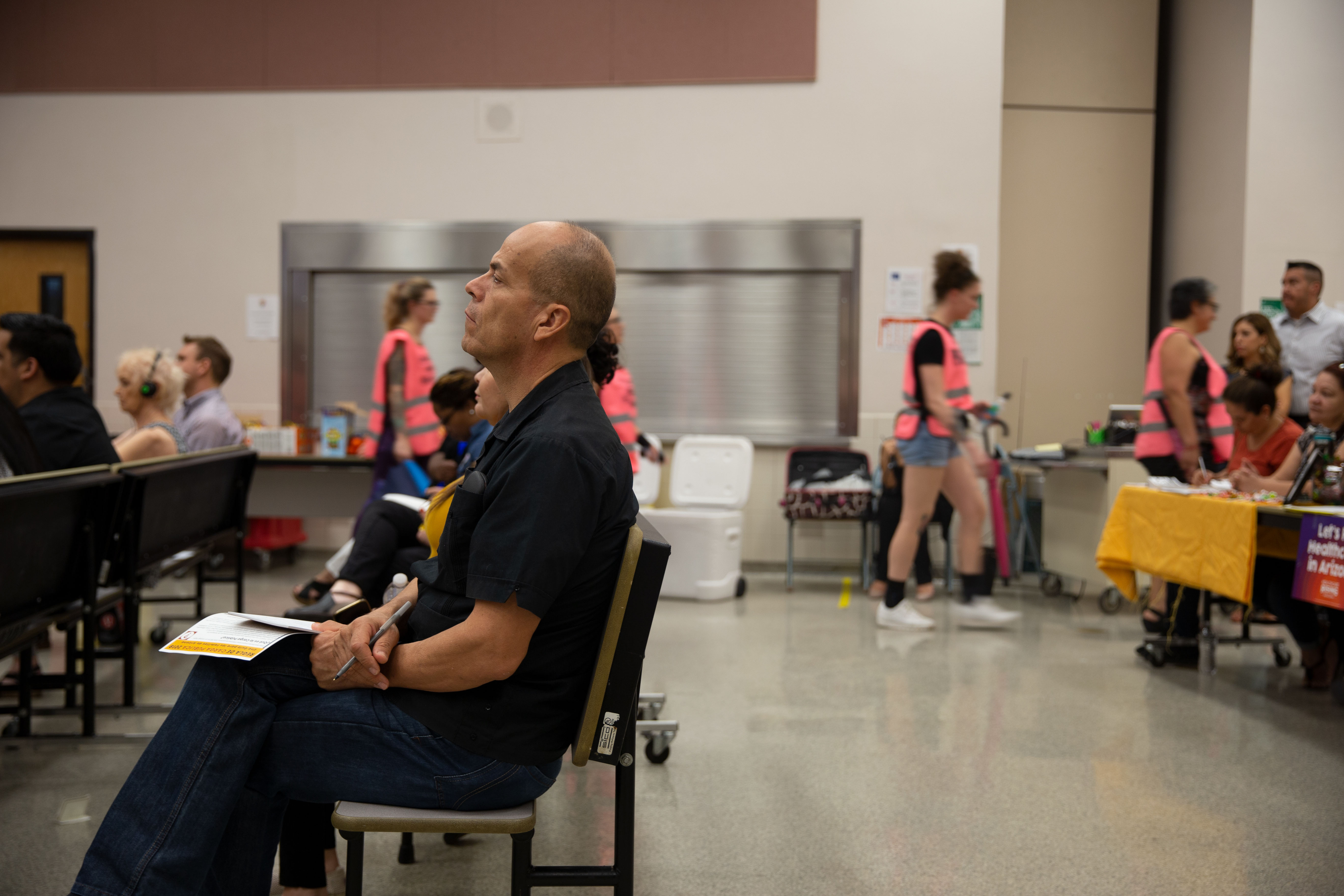 PHOENIX – Changes in the “public charge” immigration policy were temporarily blocked by federal judges in three states on Friday, days before they were set to go into effect this week.

The proposed changes would have put immigrants entering the country and those seeking green cards under more scrutiny if they have used or were deemed likely to use public benefits, including food assistance programs, subsidized housing and Medicaid.

The policy has been controversial since a draft of the changes was leaked in 2017. Since then, immigration and social-service advocates have slammed the proposed changes, arguing they target low-income immigrants and intentionally sow fear and confusion within migrant communities.

Trump administration officials have defended the law, stating the policy is simply “enforcing the ideals of self-sufficiency and personal responsibility,” as Ken Cuccinelli, acting director of Citizenship and Immigration Services, said at a White House briefing in August.

A tweet by Cuccinelli on Friday indicated the administration isn’t giving up without a fight.

“An objective judiciary will see that this rule lies squarely within long-held existing law,” Cuccinelli’s tweet read. “Long-standing federal law requires aliens to rely on their own capabilities and the resources of their families, sponsors, and private organizations in their communities to succeed.”

(1/2) An objective judiciary will see that this rule lies squarely within long-held existing law. Long-standing federal law requires aliens to rely on their own capabilities and the resources of their families, sponsors, and private organizations in their communities to succeed.

Judge George Daniels of the Southern District of New York issued the temporary injunction Friday and called the changes to public charge, “unlawful, arbitrary and capricious.” Similar rulings were issued later in the day by judges in California and Washington state.

Daniels said the policy will “expose individuals to economic insecurity, health instability, denial of their path to citizenship, and potential deportation – none of which is the result of any conduct by those such injuries will affect.”

“The rule is simply a new agency policy of exclusion in search of a justification,” Daniels’s ruling said. “It is repugnant to the American Dream of the opportunity for prosperity and success through hard work and upward mobility.”

What is public charge?

Under the proposed changes, an immigrant might not be permitted entry to the U.S. or granted a green card if the individual “is likely at any time to become a public charge,” meaning they might rely on the government as their primary means of support.

According to the Customs and Immigration Services website, “age, health, family status, assets, resources, financial status, education and skills” will be considered when determining whether someone is likely to be considered a public charge.

“No single factor, other than the lack of an affidavit of support, if required, will determine whether an individual is a public charge,” the site said.

The policy change would not affect undocumented immigrants, who are ineligible for public benefits. Instead, the changes apply to lawful residents attempting to adjust their immigration status, as well as immigrants attempting to legally enter the country.

Immigrants exempt from public charge include refugees, asylees, asylum applicants, holders of Temporary Protected Status (TPS), those with a protected status as victims of crime, human trafficking or domestic violence, and others with special statuses.

But the new definition of what is considered a “public charge” would have expanded to include the Supplemental Nutrition Assistance Program (SNAP) benefits, Section 8 housing, public housing, Medicaid and Medicare Part D for the first time.

The rule change incensed immigrant-rights advocates across the country.

‘Public charge': How changes to federal guidelines could affect immigrants who rely on benefits


In September, the social justice organization Living United for Change in Arizona, known as LUCHA, hosted an after-school town hall in the cafeteria of Encanto Elementary School in central Phoenix. A panel of immigration lawyers discussed misconceptions and potential implications of public-charge rule changes.

The attorneys spoke about the policy changes before a room of several dozen parents and community members. Some attorneys expressed concerns regarding the policy and their distrust of the Trump administration’s motives.

“Every time this administration passes a law that’s anti-immigrant, I try to think, ‘What’s the worst possible outcome of this?'” immigration attorney Daniel Rodriguez said. “When I hear that they don’t count the benefits of those who are dependents of you against you, I believe that’s incorrect.”

After the panel discussion, attorney Delia Salvatierra expressed concerns that the law would open vulnerable families up to food insecurity.

Since the public first became aware of the changes in public charge in 2017, the draft policy went through several revisions. The latest corrections were made in early October, less than two weeks before the rules were set to go into effect.

Advocates argued the law is so complicated and confusing, it could have a chilling effect on immigrants accessing benefits to which they are legally entitled.

For example, they warn that noncitizen parents of U.S.-born children may be hesitant to obtain benefits for their children, such as food assistance, in the mistaken belief it will adversely affect their immigration case.

Before the rule was blocked, Ashley St. Thomas, the policy manager of the Association of Arizona Food Banks, was concerned food banks would see longer lines at food banks, as immigrant families shy away from benefits like SNAP, which replaced the federal Food Stamp Program in 2008

“We do know from data … that there’s been a drastic decline in legal permanent residents participating in SNAP,” St. Thomas said.

Through a public records request with the Arizona Department of Economic Security, St. Thomas said the Association of Arizona Food Banks found a nearly 50% decrease in lawful permanent residents in Arizona accessing SNAP benefits from September 2017 to April 2019.

Although SNAP participation across the board has dropped in part because of the relatively strong economy, the decline among citizens was not nearly as drastic as it was among noncitizens: about 13% in the same time frame.

St. Thomas said the association has requested updated statistics from DES but hasn’t heard back yet.

Since the policy was announced, the AAFB has been working to combat potential confusion, hosting town halls in Phoenix, Tucson and Yuma to help explain the policy changes to the community. The association has five member banks that serve all 15 Arizona counties.

“Our priority is to make sure people understand food banks are a safe place and that has no impact whatsoever on their legal status,” St. Thomas said before the injunction was announced.

So what happens now?

Immigration and social service advocates are celebrating the injunction, but are still wary the administration may attempt to go forward with the proposed updates to public charge.

St. Thomas said she considers the injunction “great news” and a victory for low-income immigrant families in Arizona.

Their focus, she said, is on making sure immigrant families understand they can still use their government benefits without penalty — for now.

The organization will proceed with a scheduled town hall in Tucson on Oct. 17 to explain the changes to the community.

“Certainly we’re spreading the word … hoping to reverse the chilling effect, if at all possible,” St. Thomas said.

Given the state’s large number of families with mixed immigration statuses, the public charge rule had the potential to have an outsized impact on Arizona.

Of citizen children with an immigrant parent, 87.4% reside in just 10 U.S. states, including Arizona, where 17.3% of citizen minors have at least one noncitizen parent.

According to statistics compiled by the Department of Agriculture, about 3.4 million children in the U.S. who use public benefits have an immigrant parent.

This early on, advocates said they are still wary about what the future might hold for public charge.

“We’re still trying to understand exactly what it means.” St. Thomas said. “Before we tell families that everything is safe, we want to be certain.”