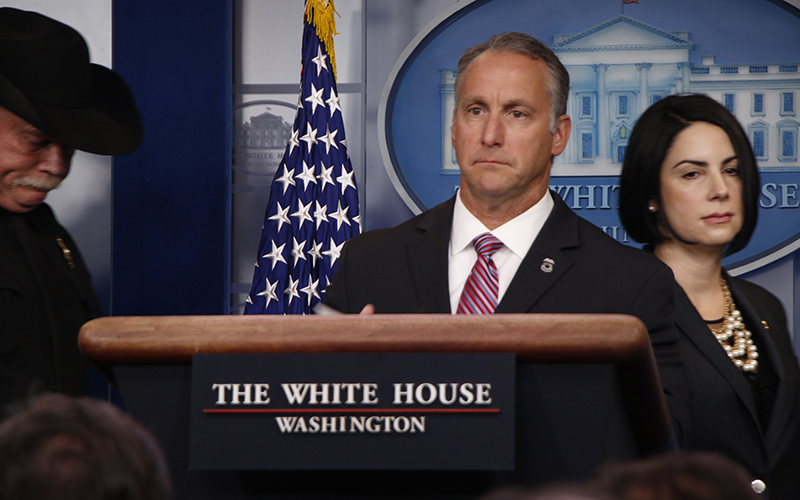 WASHINGTON – Two weeks after a federal court halted some detainer requests from Immigration and Customs Enforcement, Arizona law enforcement agencies say they are still doing business with the agency as usual.

A U.S. District judge in Central California ruled last month that ICE requests to hold people based solely on an electronic database of biometric data are an unconstitutional violation of the Fourth Amendment.

But the ruling exempts states where state law allowed local officials to hold immigrants, and Arizona is one of those states. That leaves the decision to county sheriffs – a fact that one Phoenix immigration attorney said has left cases in the state “all over the map.”

State law allows county sheriffs “the authority to develop their own protocol consistent with the law,” said Ryan Anderson, a spokesman with the Arizona attorney general’s office. He said the law bars detention of people for “longer than necessary” on suspicion of being here illegally.

But the law, supplemented by a set of guides from the attorney general, leaves enforcement to local discretion, he said. That includes how they handle ICE detainers.

For Santa Cruz County Sheriff Tony Estrada, that means turning people over to Border Patrol, but only if federal authorities can come immediately and pick them up. Estrada will not hold them, unless federal officials have a warrant, he said.

“If people are released, they have the right to move on,” Estrada said.

Pima County Sheriff Mark Napier said his office will hand over someone on whom there is an active detainer request, and it will cooperate with ICE as needed. But county officials will not work on ICE’s behalf, he said.

“I wouldn’t expect a Border Patrol agent or ICE official to write parking tickets in Pima County,” Napier said. “It’s not their job.”

Cochise County Sheriff Mark Dannels said his deputies will cooperate with federal agencies, “if there’s a collective effort or mission.” That includes honoring detainers and picking up those believed to be in the country illegally.

“What it means in practice is, it’s all over the map,” said Ruben Reyes, a Phoenix-based immigration attorney, of the way local authorities in the state decide to handle detainer requests.

Even though Arizona is mostly unchanged, Reyes welcomed the Sept. 27 injunction by U.S. District Judge Andre Birotte Jr., who said that “fatal” flaws in the database ICE uses to make decisions on whether or not to detain people made the policy unconstitutional.

“Citizenship and immigration status are complex inquiries that sometimes require information that cannot be obtained through databases that do not receive constant updates or real-time information about a subject,” Birotte wrote.

The ruling was attacked Thursday in a White House press briefing by Acting ICE Director Matt Albence, who called it an overreach by a court that vilifies ICE employees while risking “the release of criminal aliens back onto the street.”

“Make no mistake: Rulings from any individual federal court sitting in a single judicial district but purporting to cripple ICE authorities on a nationwide basis puts people at risk – innocent victims whose lives will be forever changed for the worse all across our great country,” Albence said. 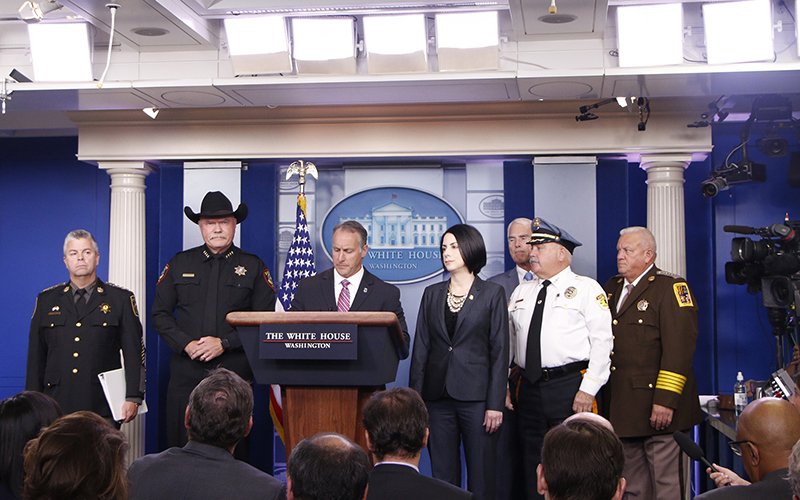 Matt Albence, acting director of Immigration and Customs Enforcement, is joined by sheriffs from Texas, Georgia and Maryland to decry a recent federal court decision that barred issuance of some detainers on immigrants. (Photo by Kailey Broussard/Cronkite News)

Albence, joined by sheriffs from around the U.S. and assistant director Barbara Gonzalez, said the ruling will also hurt relations with states and localities. He said “the vast majority” of county sheriffs see the benefit of working with ICE and honoring its requests.

“We have done this for decades because it is good policy and it is even better public safety,” he said.

Birotte’s decision is the latest in several years of legal battles between immigration advocacy groups and the federal government. Salvador Sarmiento, national campaign director for the National Day Laborer Organizing Network, welcomed the ruling and said the White House event is evidence of what he sees as political desperation.

“The more they speak, it’s basically just galvanizing more people to oppose” them, said Sarmiento, whose organization is one of several involved in the suit.

Birotte did not block detainers outright: He ruled only on those based on the database search and not where, for example, an immigrant tells authorities he is here illegally.

But Reyes called the injunction a step toward more humane immigration law that “hinders the scope and the quickness with which the agency’s been able to” detain based entirely on the databases.

“It takes away one tool” ICE has historically used, Reyes said, “but it doesn’t take away the toolbox.”