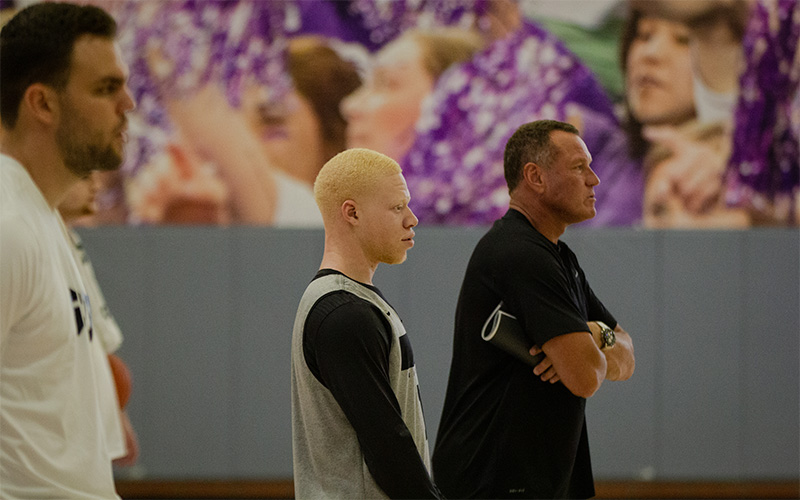 Junior guard Jaylen Fisher transferred to Grand Canyon from TCU. He spent two seasons with the Horned Frogs and declared for the 2019 NBA draft before joining the Lopes. (Photo by Sarah Farrell/Cronkite News) 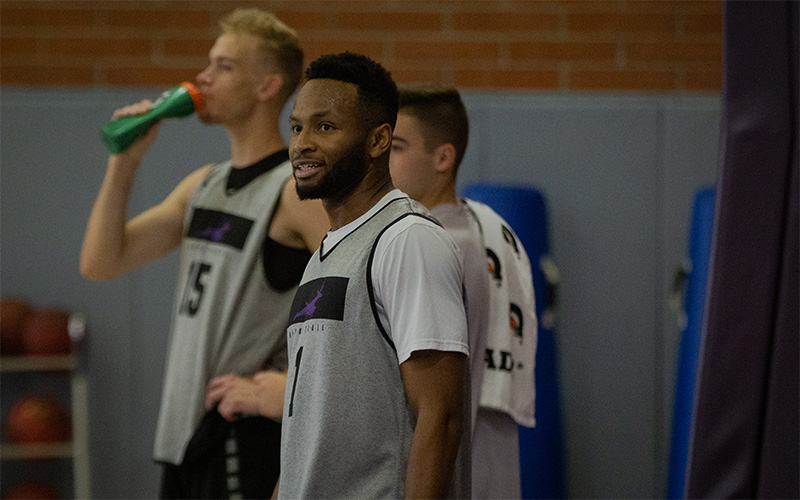 PHOENIX – When back-to-back meniscus tears for Jaylen Fisher nearly derailed his career, he responded to the adversity by joining fellow guard Isiah Brown, who also sought a fresh start, at Grand Canyon.

The two roommates represent the newest class of players drawn to GCU by the program’s track record for success among transfers under coach Dan Majerle and intrigued by the overwhelming support the team gets on campus.

Once Brown visited GCU’s campus and got a feel for student life and the energy surrounding the program, he was eager to become a part of it. He called GCU “a basketball school.”

“The community was something that I didn’t even know I was looking for until I got here,” Brown said. “It checked all the boxes for me.”

One of those boxes is the atmosphere at a GCU game. The Antelopes take pride in their large and energetic student section, called the “GCU Havocs.”

“I’ve played in a lot of big arenas in front of a lot of raucous crowds and stuff like that,” Brown said, “It’s really unlike any other place in the country.”

The energetic atmosphere was on full display this year when students camped out for several days in anticipation of the team’s annual “Midnight Madness” event that officially tips off the season. According to the Havocs’ official Twitter account, “Camp Elliott” drew the largest turnout ever, far surpassing the 168 tents of a year ago. 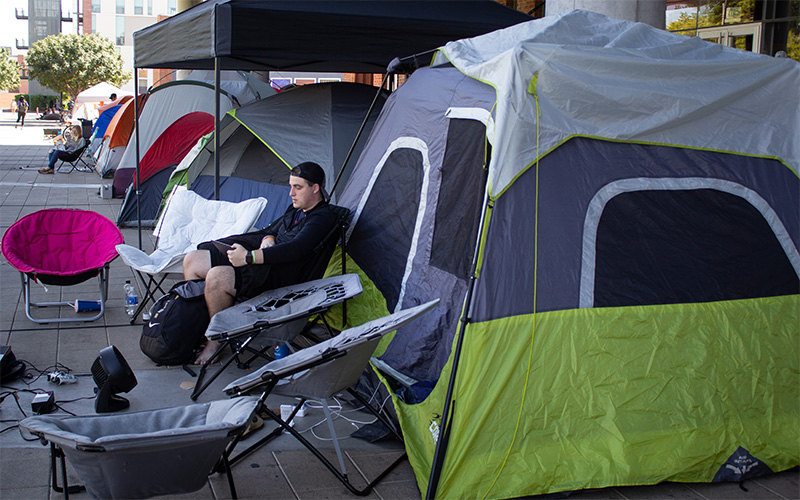 Excitement Piercen Gaborko is a senior sports management major at GCU. This is his second time camping out for Midnight Madness. He and his friends arrived Tuesday afternoon, and got the 10th spot in line. (Photo by Sarah Farrell/Cronkite News)

This year there were more than 200 tents in the encampment, named for the GCU student, Daniel Elliott, who started the tradition in 2015. Each tent must have a minimum of two people in it, and they blanketed the courtyard areas and the entrance of Grand Canyon University Arena like a multicolored quilt.

Brown and his teammates felt honored by all of the student love.

“It’s incredible. It makes it easier to come in here, work every day, and go to the gym late at night,” Brown said. “If they could do those things just to come watch, we should be able to … put our work in so we can put on a show.”

Brown first experienced the enthusiastic student section from afar, sitting out last season due to NCAA transfer rules. Now, he and Fisher hope to experience it from the court as friends and teammates.

Fisher, who is still awaiting NCAA eligibility approval, arrived at GCU from Texas Christian. He started 56 games during his three seasons at TCU, but injuries limited him to just nine games in his final season with the Horned Frogs, when he averaged 12.1 points a game.

Brown appeared in 60 games for Northwestern before announcing his transfer in March 2018. In a Twitter post, he cited his desire to advance his career as the primary determining factor in his decision to leave. “(I wanted) an opportunity to come in and play a style of basketball that I think fits my game,” Brown said. “And a relationship with the coach is something that I was really lucky to find with coach Majerle.”

First, he had to complete one academic year at the school in accordance with NCAA eligibility rules, which apply unless a student qualifies for an exception. He didn’t, so he had to be patient.

“I miss the energy being with my teammates, competing to win,” Brown said. “I’ve been out for a while. It was definitely hard. That’s the first time I’ve ever really had to sit out that long.”

Majerle said Fisher has done everything asked of him to attain eligibility.

“Having to go through the things he’s had to as far as getting eligible, he’s done a great job of working really hard,” Majerle said. “But it’s our job to give him as much support as we can.”

While Brown focused his attention on learning Majerle’s system and improving his game prior to taking the floor with his new teammates, Fisher spent his offseason rehabbing various injuries.

Fisher actually entered his name into the 2019 NBA draft but quickly rescinded his declaration and started looking for a program that would help him get back to full health.

He considered schools such as New Mexico, Buffalo and Boston College, but landed with the Lopes.

“GCU put the emphasis on what kind of (rehabilitation) I would be doing, and they were telling me the amount of time they were willing to put in to get me back on the floor,” Fisher said. “They showed me everything I needed to see.”

Once he gained confidence in the athletic training staff’s abilities and felt assured the team would take the necessary steps to keep him healthy, Fisher wanted to be sure he could play point guard.

Even though his offensive skill set allows him to play multiple positions, Fisher wanted a program and system that allowed him to be in the primary ball handler and playmaker.

Majerle was happy to hand him the ball.

“This is a kid that really knows how to play the point guard position,” Majerle said. “He can score, facilitate, make great passes – everything that he brings to this team is going to make us better.”

The last time Fisher took the court in a college game that counted was on Christmas Day 2018 against Indiana State.

“Obviously, being away from the game makes you appreciate it a little bit more, so I know Fish is excited,” Brown said.

After the 10-month journey, there is no question that Fisher is anxious to play with his teammates.

“To be with the team, and feel a part of the team, the ‘win-together, lose-together’ mentality, the whole nine (yards), I just enjoy playing again,” Fisher said.

While Fisher said the knee injuries have been difficult to overcome, the lessons learned during his journey have stuck with him.

“It’s been a long process, and it’s been tough, but through the time you find out who you are,” Fisher said, “(It) makes you want to stick with what you’re doing. That was the biggest part.”

The coaches and athletic training staff helped Fisher transition into a new system and environment. They have plenty of experience with players who transferred relatively late in their careers.

Last year, it was forward Michael Finke, a redshirt senior from Illinois.

He ultimately became the third-leading scorer for the Lopes last season. Fisher and Brown hope to replicate his success.

“The guys here want them to be successful and want them to push themselves,” Majerle said. “For Jaylen, it’s just about going out, playing your game. Be a leader. Show what you can do.”

With Brown and Fisher leading the backcourt, the chemistry between the duo is vital. In their short time together they have already formed a tight bond.

“We have similar personalities, and obviously play a similar position,” Brown said. “We got along really well before we were even able to practice together.”

Fisher said he felt as though he had found a home with the Lopes as soon as he got to GCU.

“Words really can’t explain how they embraced me,” he said. “I feel like I already knew everybody. When I came here, I felt like I was already a brother.”

As Grand Canyon prepares to open the season with an exhibition game against Cal State San Bernardino, excitement over GCU’s potential is growing in the locker room.

The Lopes were 20-14 last year, and were a victory away from earning the Western Athletic Conference’s automatic bid to the NCAA Tournament before losing 72-58 to New Mexico State in the championship game of the WAC tournament.

Brown and Fisher are ready to help the Lopes take at least one more step this season.

“We got a lot of guys that just love to play basketball,” Brown said. “The main thing for us is really just getting back out there, getting in front of the fans, and getting to compete.” 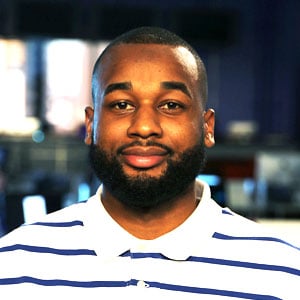