Fishermen say they’re willing to try other gear if they can’t use nets, but that gear will have to work. The ban on gillnets in the upper Sea of Cortez is meant to protect two endangered species: the vaquita and the totoaba, whose swim bladder makes it a prime target of poachers. (Photo by Kendal Blust/KJZZ)

PUERTO PEÑASCO, Sonora – The Mexican government says it’s increasing enforcement efforts in the Sea of Cortez to prevent illegal fishing nets from harming a critically endangered porpoise. It comes a week after local fishermen announced they would buck a fishing ban this shrimp season, but the government’s plan doesn’t address their concerns.

Mexico’s environmental protection prosecutor says 600 troops will be arriving in the northernmost reach of the Sea of Cortez – also known as the Gulf of California – to enforce a “zero tolerance” program. It’s part of an effort to protect the vaquita marina porpoise, whose numbers have dwindled to less than a dozen.

“It’s a good sign, but it’s arriving very, very late because the vaquita has no time,” said Alejandro Olivera, Mexico’s representative for the Center for Biological Diversity.

He says enforcement is necessary to protect the vaquita from illegal gillnets that can trap and drown the small porpoise.

These nets are used by poachers to catch another endangered marine animal, a huge fish called the totoaba, which is prized for its swim bladder; the black market for totoaba is considered the main threat to the vaquita. But experts say other gillnets, including those used to catch shrimp, also pose a risk.

However, keeping nets out of the water is not enough, Olivera said. The government also needs to address the concerns of local communities who rely on fishing for their survival. That’s not happening.

“The government, with this kind of decision is pushing the fishermen to go out and fish illegally,” he said.

In the past, they have been paid not to fish in the northern end of the Sea of Cortez, where all gillnets have been banned since 2015. But that compensation hasn’t been paid since President Andrés Manuel López Obrador took office in December. 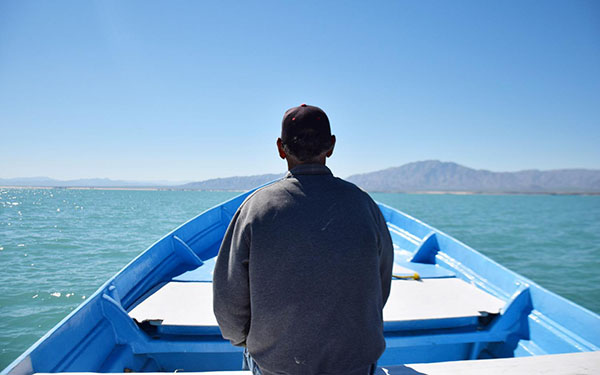 A fisherman heads to open waters in his small boat, called a panga. Fishermen along the northern tip of the Sea of Cortez say they want to protect the vaquita marina but have to feed their families, too. (Photo by Kendal Blust/KJZZ)

Fishermen have repeatedly sent letters and held meetings with environmental authorities in the administration but have yet to get a response, said Lorenzo Garcia, president of the largest fishermen’s federation in San Felipe, Baja California. That led fishermen to take to the water again in March, leading to a skirmish between some fishermen and with authorities.

In a press conference last week, leaders from fishermen’s federations in San Felipe and Santa Clara said they have no choice but to fish this shrimp season, which started Sept. 24. The government has only approved a fishing method in the upper Sea of Cortez that doesn’t work, they contend, so they’ll be using gillnets. But they say they are avoiding a smaller Vaquita Refuge area where the remaining porpoises are believed to be concentrated, and they say they are open to using other fishing gear if it works.

“We’ve proposed many solutions to the government that would protect the vaquita, but so far we haven’t received any response,” Garcia said during the press conference. “We have been nine months without any compensation.”

They’re asking for an official response for the government that responds to their needs and finds a balance between protecting the vaquita and humans who rely on the sea. 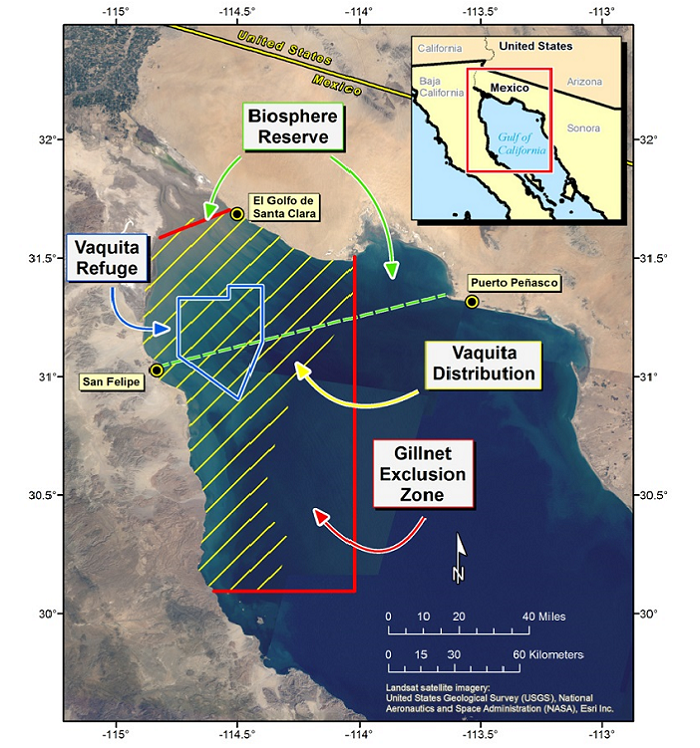 A map of the vaquita refuge and gillnet exclusion zone in the Sea of Cortez. (Graphic by National Oceanic and Atmospheric Administration)

“We know that for the vaquita to survive and thrive in the long term and in the future, we know it has to go hand-in-hand with the survival as well of the communities of the upper Gulf (of California),” said Eva Hidalgo, the science coordinator for Sea Shepherd Conservation Society, which pulls illegal nets from the sea.

She said Sea Shepherd hopes to work with legal fishermen who have agreed to stay clear of the Vaquita Refuge area.

In the past, the only nets Sea Shepherd was worried about were illegal totoaba nets, which they remove from any part of the area where gillnets are banned. But Hidalgo said the group will not pull the nets of legal fishermen unless they’re in the Vaquita Refuge, and that hasn’t been an issue so far.

“We hope that legal fishermen will keep collaborating with us on that,” she said. “We know that they also really care about protecting the vaquita.”