Border Patrol agents stopped 1,036 men, women and children trying to cross the border in El Paso, Texas, earlier this year. Just under 980,000 migrants were apprehended at the southern border in fiscal 2019, the highest number in more than a decade, and many were families and children. (Photo by Agent Edward Butron/U.S. Customs and Border Protection) 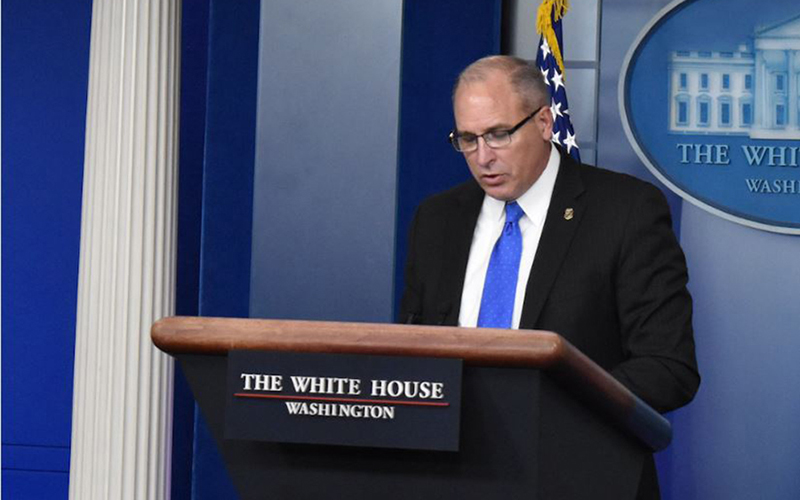 Mark Morgan, the acting commissioner of Customs and Border Protection, said that Unlike previous years, when most immigrants were adult men, the number of children and families stopped in the last year “more than tripled any previous fiscal year on record.” That has placed additional strain on the system, he said. (Photo by Vandana Ravikumar/Cronkite News)

WASHINGTON – Border officers apprehended nearly 1 million migrants at the southern border in fiscal 2019, an 88 percent increase over the previous year, according to Customs and Border Protection numbers released Tuesday.

Acting CBP Commissioner Mark Morgan said at a White House press briefing that the “staggering” increase was one that “no immigration system in the world is designed to handle, including ours.”

But Morgan said the Trump administration is making inroads through programs aimed at making it harder for migrants to claim asylum – a move experts agree is reducing numbers but may also “cut off access to asylum for people who would have had legitimate asylum claims.”

The numbers released Tuesday show 52,546 people were apprehended at the border in September, bringing the total for the fiscal year to 979,315, the most for a year in more than a decade.

Unlike previous years, however, when most immigrants were adult men, Morgan said the number of children and families stopped in the last year “more than tripled any previous fiscal year on record.” That has placed additional strain on the system, he said.

“Our Border Patrol facilities … were not designed to hold families or children. They were designed as police stations,” Morgan said.

Katie Sharar, communications director for the Nogales-based Kino Border Initiative, said agencies like hers have seen that shift.

“In the past, it’s been mostly single adults, and primarily single men,” Sharar said. “And this year, it’s a lot of family units or minors. And when they cross the desert, then they turn themselves into Border Patrol because they’re seeking asylum.”

Morgan partially blamed what he called “judicial activism” by courts that have blocked Trump administration plans to close what it calls loopholes in the migration process and a reluctance by Congress to change laws that require timely release of children held by immigration authorities.

While apprehensions rose overall, Morgan pointed to a sharp drop in September, the fourth consecutive month to see a decline.

“The total number of law enforcement actions last month was just over 52,000 – down almost 65 percent from the peak in May of 144,000,” Morgan said. “This is an unprecedented achievement.”

He attributed that decline to initiatives like the Migrant Protection Protocol, aimed at keeping migrants from being able to cross the border in the first place. Under the program, the government sends migrants to Mexico to await immigration proceedings instead of taking them into custody in the U.S. or releasing them into the interior.

A migration policy expert said the use of MPP has significantly ramped up since May. That, combined with increased immigration enforcement in Mexico, had a profound impact on the number of apprehensions at the southwestern border, she said.

“In August, 19 percent of all people who were taken into custody at the southwest border were sent back to Mexico under MPP,” said Jessica Bolter, an associate policy analyst with the Migration Policy Institute. “Four percent in May were sent back under MPP. So they’re clearly ramping up the capacity there.”

In other words, she said, the number of law enforcement actions may have fallen in recent months because MPP has deterred migrants – primarily, Central American families – from trying to cross the border, as they can no longer ensure they will be let into the country to await immigration proceedings.

“The biggest pull factor that the Trump administration has identified is the extremely long immigration court backlog,” Bolter said. The current backlog stands at more than 1 million cases, according to data from the Executive Office for Immigration Review.

“A lot of the actions the administration has taken have been aimed at, you know, cutting back access to the asylum system, and to the kind of benefit that comes with filing an asylum application, which is getting to stay in the U.S,” she said.

But while the administration may have closed a so-called “loophole” in the immigration system, it may have also shut the door on people who would otherwise qualify for asylum, she said.

“These actions are going to cut off access to asylum for people who would have had legitimate asylum claims, and they aren’t necessarily taking that into account,” Bolter said. “They may be kind of effective in reducing the flows, but it’s not clear that they’re effective in improving access to asylum.”

But Morgan had nothing but praise for the administration’s actions, saying that President Donald Trump is remaining true to his words from the campaign trail.

“While Congress has failed to bring a single piece of meaningful legislation to the floor, this president and this administration is doing exactly what he promised to the American people,” Morgan said.