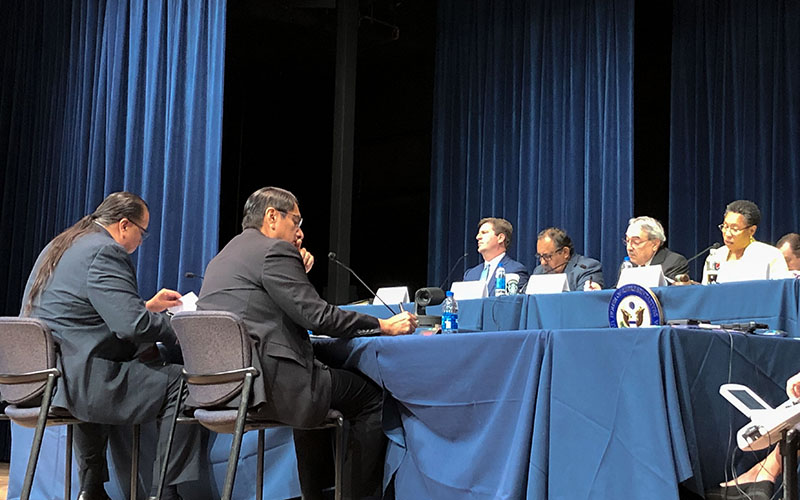 PHOENIX – The voting rights of Native Americans in Arizona are routinely suppressed by a slew of requirements and practices, such as photo ID laws and a scarcity of polling places, Navajo and Gila River leaders said Tuesday at a congressional hearing in Phoenix.

“If someone from the Navajo Nation submits a ballot on Election Day without a photo ID, they have to go through so much additional documentation for their vote to be counted,” Navajo Nation President Jonathan Nez said.

Nez and Stephen Lewis, governor of the Gila River Indian Community, also told members of the House subcommittee on elections that voting information often is in English, which doesn’t help speakers of Native languages.

At the hearing at Phoenix College, they said a proposed Native American Voting Rights Act could ease some of the burdens by removing the requirement for photo ID, adding translators for Native speakers, being less restrictive with mail-in ballots and opening more polling places.

The number of polls in Arizona has dropped by the hundreds since 2013, when the U.S. Supreme Court struck down parts of the federal Voting Rights Act, including oversight of election laws in Arizona and eight other states.

Thirteen of Arizona’s 15 counties have closed polling locations since 2013, according to Rep. Marcia Fudge, D-Ohio, who chairs the subcommittee on elections.

Arizona had 400 polling locations in 2005; today, it has only 60, said Darrell Hill, Arizona’s policy director for the American Civil Liberties Union.

The subcommittee heard from the community on election issues that affect voting rights, especially of underserved communities in Maricopa County and elsewhere in Arizona. Native Americans and other people of color, people with disabilities and low-income voters are effectively being disenfranchised, advocates said.

“I think it’s unfortunate our tribal leadership was not reached out to. When important decisions like this are made at the state Capitol that affect Native Americans, nobody thought to ask for the opinions of our tribal leaders, and that is exactly why the voting rights act was and is so important.”

Lewis said Election Day is treated as a family tradition for Native Americans in Arizona. It is an opportunity for families to catch up on politics and demonstrate to their young ones why voting is important.

Nez said mail-in ballots don’t have the same restrictions as voting in person – “If you vote early by mail, all you need is your signature.”

But Native Americans living in rural areas face a slew of obstacles, whether with mail-in ballots or voting in person.

“Tribal cards do not include addresses, do not have standard county addresses, and many tribal members do not receive mail at their homes,” Nez said. “Sometimes up to five families have to share a single P.O. box.”

Mail can get lost on its way to a reservation, and ballots are rarely translated into indigenous languages, which more than half of Native Americans in Arizona speak, according to Patricia Ferguson-Bohnee, director of the Indian Legal Clinic at Arizona State University. 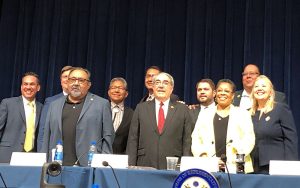 The House subcommittee on elections convened Tuesday in Phoenix to hear about challenges to voting by underserved communities in Arizona. Advocates say people of color, people with disabilities and low-income voters are effectively being disenfranchised. (Photo by Deagan Urbatsch/Cronkite News)

Also, more than half of tribal lands don’t have internet access, according to a study cited by Ferguson-Bohnee.

“There is no public transportation here on the reservations. In some parts of the Navajo Nation, only 1 in 10 families owns a vehicle,” said Nez said.

“The results were chaos, and low-income and minority students bore the brunt of the impact. In Phoenix, there is one polling location for every 108,000 residents,” Hill said.

In the 2016 and 2018 elections, voters in Maricopa County at certain locations experienced wait times of five to six hours, Fudge said.

Maricopa County Recorder Adrian Fontes did not attend the hearing but released a statement defending the decrease in polling places. He said the continuing trend toward early voting through mail-in ballots lessened the need for in-person voting.

Using the number of polling locations as a measure doesn’t give the complete picture of improvements in Maricopa County elections, he said.

“It is like my grandmother seeing that I have lost over 70 pounds and thinking I am sick, when I have actually been exercising and watching my diet,” Fontes said. “In 2018, Maricopa county had the highest midterm election turnout in recent history, at 64.5%.”

Fontes added that he’s working with representatives of the East Valley NAACP, disability rights groups and other members of “historically underserved communities” in roundtables to determine and find solutions to challenges at elections.