PHOENIX – This year’s monsoon season was one of Arizona’s driest ever. Despite last week’s wet and wild start to fall, for many towns and cities, it wasn’t enough to put a dent in the annual deficit. 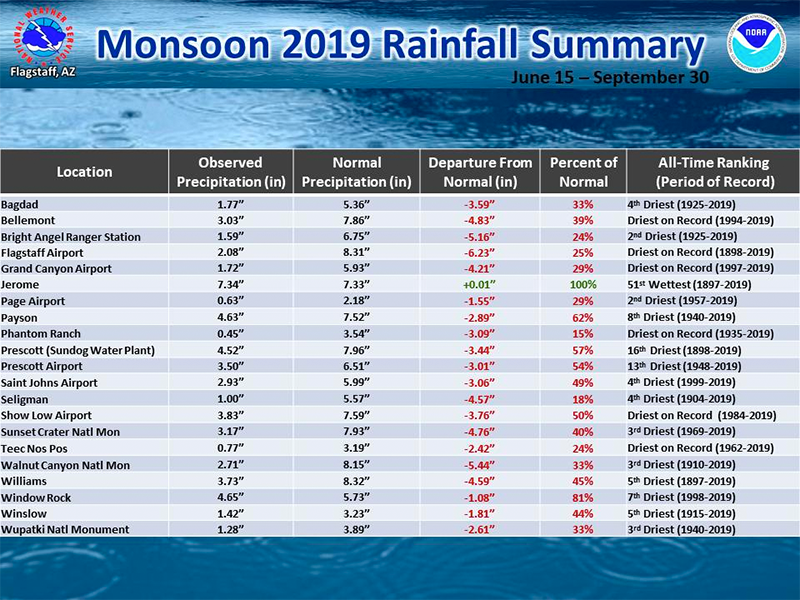 For Phoenix, this year’s monsoon season, which ended Monday, was the fifth driest since record-keeping began in 1896. But in Tucson, the monsoon closed just 1 inch shy of the normal, at 5.06 inches.

The National Weather Service calls last week’s mess a “transition event” – a bridge between the monsoon and the fall weather pattern.

A recap of last week’s mess

Monday was the worst day of this storm system, as East Valley residents woke up to flooded streets as storms dropped more than 3 inches of rain in places. By the evening rush hour, severe thunderstorms brought penny- to nickel-size hail north of downtown Phoenix and in Paradise Valley; the hail was quarter-size near Buckeye and in north Scottsdale.

Monday also saw two tornadoes touch down in Arizona. Some homes in New River received minor damage from an EF0 tornado, which had winds up to 80 mph. Later that night, an EF1 was confirmed near Willcox in southeastern Arizona, injuring two people and damaging several mobile homes.

The state averages four tornadoes per year, according to the National Weather Service; since 1950, there have been 247 confirmed twisters in Arizona.

Yuma set a new daily maximum rainfall at 0.53 inches, doubling the record set in 1999, on Tuesday. By Thursday evening, another round of storms brought nearly an inch in Anthem and parts of the West Valley.

The map below shows rainfall totals across metro Phoenix from Sept. 23-27. 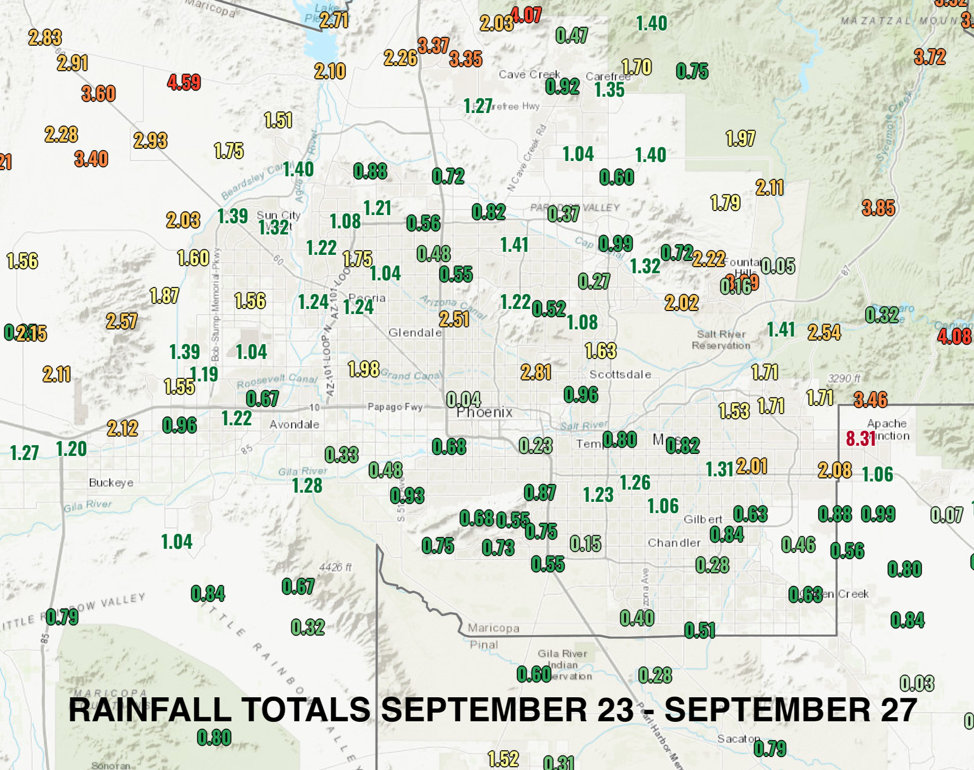 Despite some municipalities receiving nearly a third of their average annual rainfall, Phoenix Sky Harbor International Airport – where the city’s official recordings are taken – received just 0.23 inches all of last week. The drought monitor shows no improvement anywhere across Arizona; metro Phoenix remains in severe drought.

The National Weather Service says heavy rainfall is harder to ease drought because it runs off more than it soaks into the soil. In fact, Salt River Project had to release water from its dams along the Salt River to prevent overflow. The winter season is the best opportunity for the Southwest to curb drought. 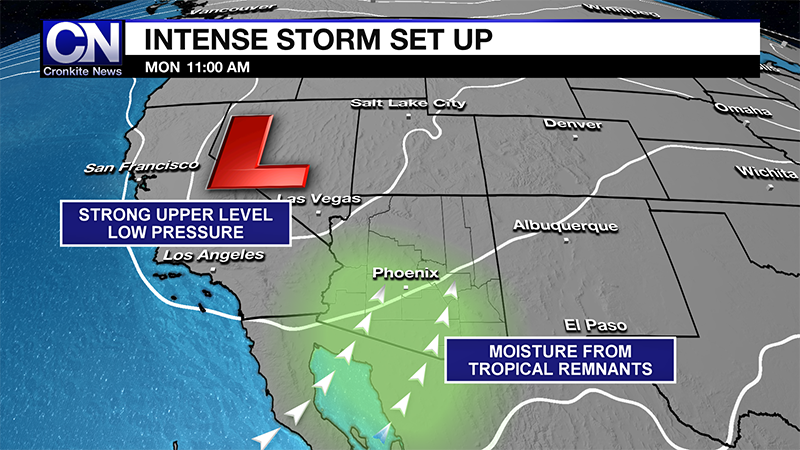 Until recent years, the weather service office in Phoenix used dew points to mark the beginning and end of the monsoon. It now declares the season starts June 15 and ends Sept. 30.

In the desert Southwest, the monsoon is driven by an area of upper-level high pressure over the Four Corners. This position allows moisture to be pulled in from the Gulf of Mexico and the Sea of Cortez. Extreme heat and mountain ranges initiate these summertime thunderstorms.

Last week’s setup was much different because two things came together.

First, ample moisture from the remnants of tropical storms Lorena and Mario fueled the atmosphere. Second, a powerful upper-level area of low pressure detached itself from the jet stream, which is a flow of winds about 35,000 feet above the Earth’s surface. Big storm systems tend to follow this flow of winds, but the separation last week allowed the system to stall over Yuma.

Such conditions have happened before. In late September 2014, an intense line of thunderstorms moved through central Arizona, bringing high wind gusts near 70 mph that damaged some of the terminals at Sky Harbor airport.

In early October 2010, Phoenix saw its largest hailstone ever, at 3 inches in diameter – nearly the size of a baseball. This was a rare event for Phoenix, as hail this big primarily occurs over the Great Plains. This was also the same storm system where multiple tornadoes touched down in the high country.