Return to Cal stirs memories for ASU’s Herm Edwards, who put himself in the record book 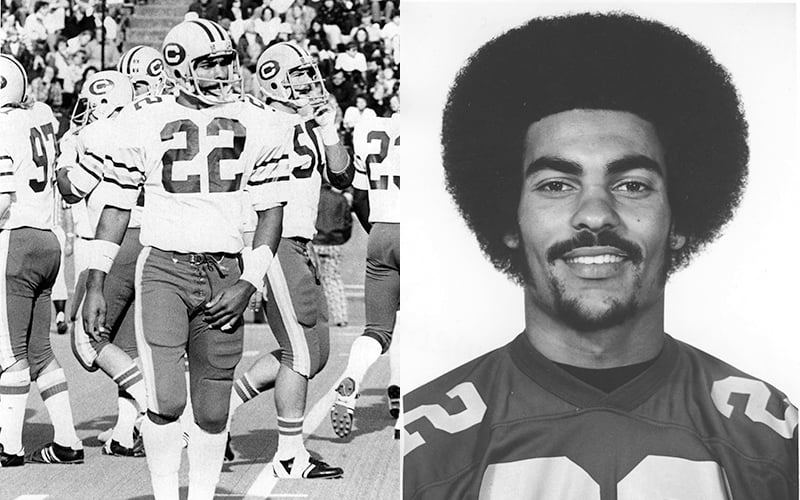 TEMPE — A moment came during Monday’s press conference when Herm Edwards realized just how far back his connection with California, Arizona State’s next opponent, runs.

The Sun Devils’ Friday night matchup with the Golden Bears will provide a homecoming for both Edwards and offensive coordinator Rob Likens, who coached wide receivers in Berkeley for two seasons (2013-14).

Edwards left his mark. He still holds a Cal record – intercepting four passes in a single game – a feat he accomplished against Washington State in 1974.

“I never thought, in my lifetime, when I went to college there, and then went to San Diego State, that I’d actually be visiting these colleges again, and I’ve been back numerous times, but as a coach,” Edwards said. “The world is a circle, it is.”

Likens, now in his third season in Tempe, compares this year’s youthful Sun Devils team to his first team at Cal, which went 1-11. In the midst of the 10-game losing streak to end the season, Likens said he and the receivers had a talk while at the Rose Bowl to take on UCLA.

“I remember the looks on all of my young receivers’ faces when I was talking to them,” Likens said. “And I just remember, candidly, the conversation I had with them about, ‘You’ve just got to be patient. All of this work, everything that you’re doing right now, is going to pay off.’

Looking back, not only did then-freshman quarterback Jared Goff go on to the NFL as the No. 1 pick in the 2016 NFL Draft, but five receivers went on to NFL careers, too. Yet by the time the offense exploded in 2015, Likens was off to be the offensive coordinator at the University of Kansas, a decision he said he was “sad” to make.

“I knew that I was going to miss the payday,” Likens said. “I remember that year at Kansas was one of the hardest, toughest years of my life, watching those guys on TV while we were going 0-12, knowing that I could’ve been there and experienced all of the joys that came from all the hard work I never got to enjoy while I was there.”

Of course, Edwards’ time at Cal pre-dates Likens by three decades, back when he played for the Golden Bears as a defensive back in 1972 and 1974 (with a year at Monterey Peninsula Junior College in between). He says he’s visited the school often, and even taken his daughters there to see where their father went to college, but returning as a coach is something he’s still coming to terms with.

“This will be interesting, when I walk into that place being a coach,” Edwards said. “I can’t believe it, to be quite honest. San Diego State was one thing, but now I’m going back to this place? You’ve got to be kidding me. It’ll be a lot of fun.”

Edwards said his time in Berkeley and at Cal “changed his life” and, after growing up with a father that was a Master Sergeant, the change of scenery was vital for the “inquisitive” young Edwards.

“It made me grow up very quickly and it made me understand that, you know what, you’re going to have to make a decision on things in life right about now on what you want to become,” Edwards said. “There’s a lot of different avenues, there’s a lot of things out there that you can dabble in, if you like. But you’ve got to choose your road now. That was the first time that I was away from home. Obviously, I wasn’t that far away, two hours, but it felt like I was miles and miles away.”

He also said he appreciated taking Dr. Harry Edwards’ class as a freshman and learning about the history of the civil rights movement and athlete involvement in it from someone who was there for so much of it. But he also learned just from hearing the daily speeches that happened at People’s Park and at Sproul Plaza, giving him fresh perspectives.

“It’s different,” Edwards said. “People think outside the box. People voice their opinions, whether it’s right, wrong or different. And for me, it was the perfect place.”

And as the Sun Devils prepare to head to Berkeley for Friday night’s game and give Edwards a return to California Memorial Stadium, Cal sports a fearsome defense that includes standout defensive back Ashtyn Davis, a safety receiving NFL Draft buzz.

Edwards said Davis is a good player with “great eyes” and plans on speaking to him in the warmups. But when he does that, he plans on bringing up his greatest game as a Golden Bears player.

“I’m gonna tell him, in the warmups, ‘My record is still in that book, if you’d like to break it,'” Edwards said. “It’s still sitting there.”

On Nov. 16, 1974, Edwards picked off Washington State quarterback Charlie Peck four times, including returning the first one for a touchdown, in a 37-33 win for Cal. In the 45 years since then, there have been only eight Cal players that have intercepted more than five passes in a full season, let alone in any single game.

And while Edwards said he had “a pretty good idea” that his record would last for a while, he wouldn’t mind seeing Davis or any Golden Bears player breaking it. Just as long as they don’t do it on Friday night.

“I’m gonna tell him, ‘You can go ahead and get that, it’s still sitting there. Go get it if you want. Not today. Don’t do it on us, man. Do it on somebody else,'” Edwards said.