The Rev. Bill Lyons from the United Church of Christ in Phoenix joined other pastors at the Capitol to call for a “moral budget” that does not include funds for a border wall or additional border security efforts. (Photo by Vandana Ravikumar/Cronkite News) 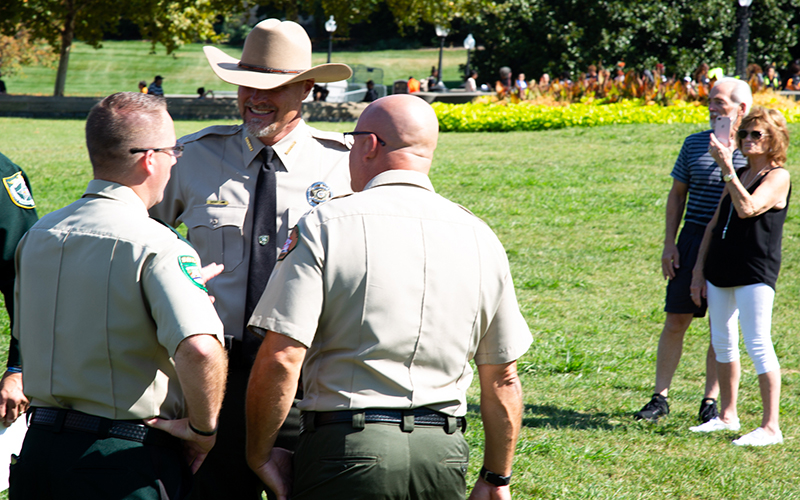 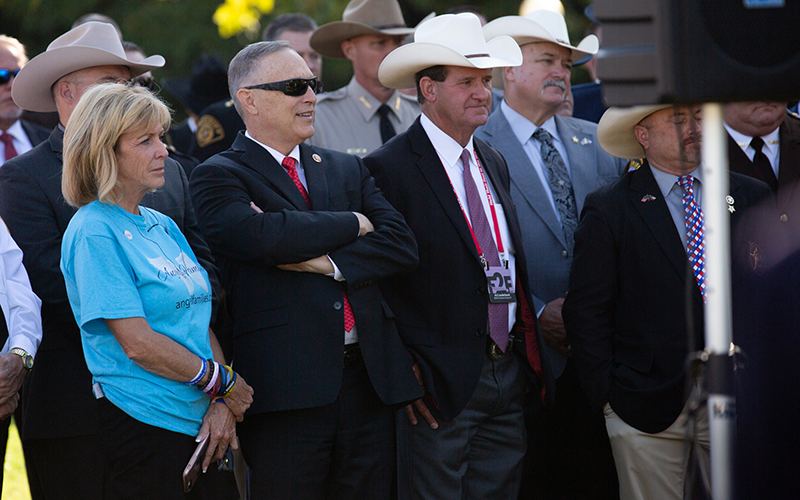 Mary Ann Mendoza, left, stands with Rep. Andy Biggs, R-Gilbert, at a rally calling for tougher immigration enforcement. Mendoza’s son was killed in 2014 by a drunken driver was in the U.S. illegally. (Photo by Harrison Mantas/Cronkite News) 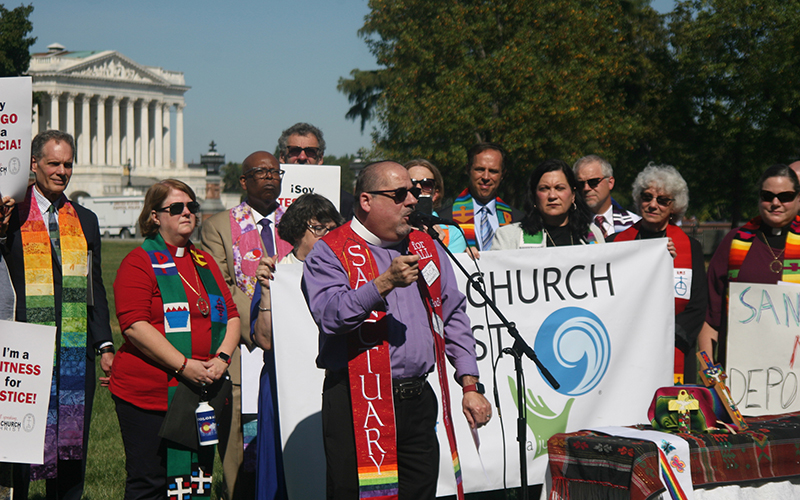 On the West Front, Pinal County Sheriff Mark Lamb joined close to 200 other sheriffs, lawmakers and “angel families” to say the U.S. needs to secure its borders to “protect our communities” from illegal immigrant crime, especially drug and human trafficking.

On the East Front, meanwhile, the Rev. Bill Lyons from Phoenix was one of the United Church of Christ pastors doing a symbolic foot-washing of migrants and calling on Congress to pass a “moral budget,” one with no funds for a border wall or increased enforcement.

The conflict comes as the deadline nears for Congress to complete its work on a federal budget for fiscal 2020, which will require action on controversial issues including border security.

Advocates are using that short window to push for what Lamb called “comprehensive, common sense immigration solutions” that include building a wall and hiring more border agents, or for Lyons’ demand for the Trump administration to end its opposition toward illegal immigration.

In a speech to the crowd on the West Front, Rep. Andy Biggs, R-Gilbert, warned that Congress’ continued inaction will have dire consequences for the country.

“If we do not control our border, and I mean like ASAP, this country is changed,” Biggs told the enthusiastic crowd. “It becomes a country of lawlessness.”

That sentiment was echoed by Lamb, who said that issues at the border affect every community in the country, referring to the angel families that traveled from all over to attend the rally. He said law enforcement can only do so much to stem the number of immigrants crossing the border.

“If you don’t like the laws, then Congress is who you need to address,” Lamb said. “In the meantime, we’re doing our job.”

Mary Ann Mendoza and Steve Ronnebeck, who both lost sons in Mesa at the hands of individuals who were in the country illegally, came Wednesday to support the sheriffs and raise awareness of illegal immigrant crime. 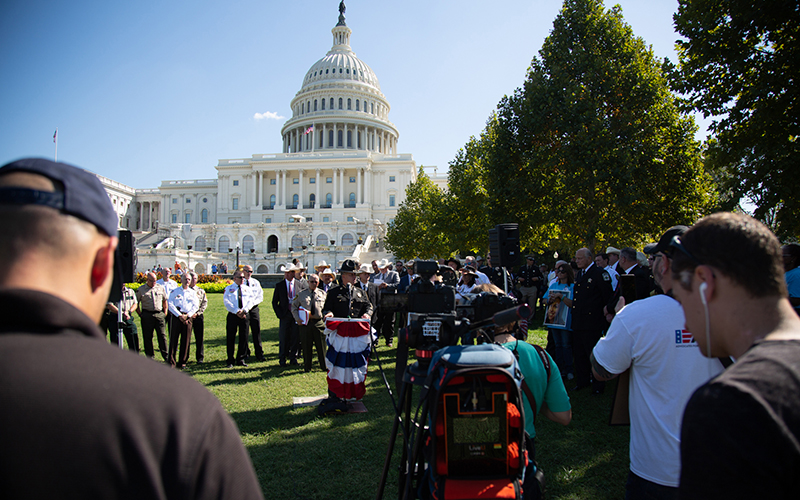 Organizers said 191 sheriffs from across the country gathered in Washington to advocate for tougher enforcement of immigration laws. (Photo by Harrison Mantas/Cronkite News)

She and Ronnebeck rejected charges that opposition to illegal immigration stems from bigotry, saying it is a humanitarian question. Their children were “collateral damage” of Congress’ inaction on border issues, they said.

“They need to hear this and maybe, just maybe, they’ll realize that we do actually have a crisis at the border and it’s not getting any better,” Ronnebeck said. “It’s getting worse.”

The ministers agreed that the border crisis is a humanitarian one, but they argued that migrants only cross the border because their home countries are highly dangerous. That’s why border enforcement efforts are misguided, they said.

“Every dollar for detention, deportation, and border militarization is a dollar for dehumanization, brutalization, and misery,” said Lyons, minister for the Southwest Conference of the UCC.

Lyons, who traveled from Phoenix for the event, said the churches in the conference and their interfaith partners have acted as migrant sanctuaries and shelters, in addition to providing case-management services, medical care, food, clothing and shelter to as many as 300,000 migrants who crossed the border this fiscal year – services that they provide in the absence of government action.

Lyons asked that Congress include “iron-clad ‘report language'” in the budget spelling out “how the Department of Homeland Security can and cannot spend the money allocated to them, putting those dollars out of the reach of the president.”

He also called for an increase in funding for humanitarian aid programs in Central America’s Northern Triangle countries of Guatemala, Honduras and El Salvador. Those dollars must also come with the same oversight, Lyons said.

Other pastors at the event also expressed anger over Trump administration policies. 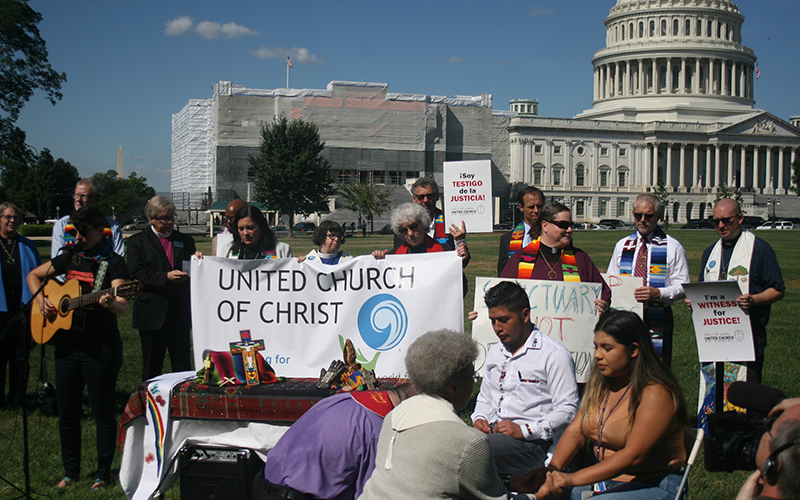 As part of their rally, the ministers symbolically bathed the feet of a DACA recipient and Guatemalan asylum-seeker. (Photo by Vandana Ravikumar/Cronkite News)

“We demand that the ill, immoral treatment of immigrant families, the forced separation and kidnapping of children stop, and stop immediately,” said the Rev. Justo Gonzalez II, a UCC Illinois conference minister. “In Spanish, we say, ‘Basta ya,’ enough is enough.”

Lyons said the ministers wanted to make the point that appropriations amount to a “moral statement” for the country.

The demonstration included the symbolic foot-washing of an asylum-seeker from Guatemala and a recipient of Deferred Action for Childhood Arrivals deportation protection. It was meant to show reverence for the journeys that migrants go through, Lyons said.

“Migrants use their feet to get here,” he said. “They’re holy journeys, and we honor those journeys washing the feet that made them.”

The groups did not cross paths and, while Congress still has work to do, it did not appear that any minds were changed among those at the rallies.

Mendoza criticized Congress’ focus on the separation of some families at the border.

“They have hearings to have illegals come and talk about the tragedy of being separated from their child for 20 days and the permanent psychological damages this had on their family,” Mendoza said. “We’re permanently separated. What do you think that’s done to our families?”

The pastors, meanwhile, said they have “zero tolerance” for the Trump administration, which Lyons said “transgressed the border between civility and violence, between debate and hate, between humanity and dehumanization.”

“With the righteous anger of Jesus overturning tables in the temple I am here to say, ‘Pass a moral budget! Defund the hate,'” he said.