Members of the Congressional Western Caucus met with officials from agriculture, energy and land use industry groups to discuss several Republican proposals to revise the Endangered Species Act, while Democrats held a separate hearing on mostly Democratic bills. (Photo by Kailey Broussard/Cronkite News) 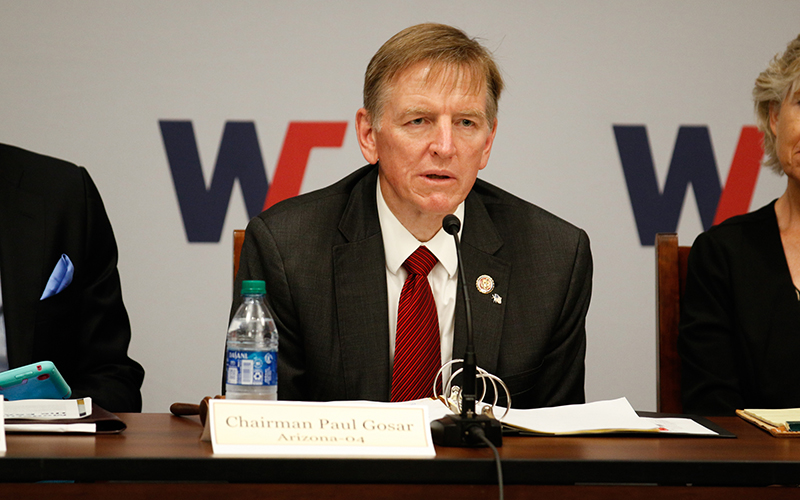 Rep. Paul Gosar, R-Prescott, said that despite current partisan differences, he hopes both sides can come together to pass legislation to improve the Endangered Species Act and protect “the critters … the habitats, and more. (Photo by Kailey Broussard/Cronkite News)

WASHINGTON – In the debate over the future of the Endangered Species Act, Rep. Paul Gosar, D-Prescott, says that all parties “deserve a say and seat at the table.” But on Tuesday, at least, the parties were not at the same table.

House Democrats and Republicans held competing hearings Tuesday, where each side took up their own bills just days before the Trump administration rolls out changes to the decades-old act.

Members of the GOP-led Western Caucus unveiled 19 new bills that would build off the administration’s rollbacks to the endangered species law. At the same time, Democrats in a House Natural Resources subcommittee heard 10 mostly Democratic bills to expand protections under the law.

Gosar, who chairs the Western Caucus, defended its hearing, saying the committee event would be taking testimony from environmental advocacy groups including Earthjustice and Defenders of Wildlife, groups he said “are more interested in filing frivolous litigation” than in constructive engagement.

“We wanted to make sure that there were differing viewpoints,” he said after the meeting. “The status quo isn’t working.”

The feeling appeared to be mutual.

“We expect, unfortunately, that just as the Trump administration sort of put the first nail in the coffin for the Endangered Species Act, now this Western Caucus is working to continue the undermining effort here in Congress,” said Marjorie Mulhall, Earthjustice legislative director, of the GOP bills.

Republican leaders, flanked by more than two dozen leaders in agriculture, energy and land rights, praised the Trump administration’s decision to loosen rules on species habitats and tighten those determining the ongoing status of an endangered species. They also applauded efforts to take further steps.

Chris Udall, executive director of the Agribusiness and Water Council of Arizona, said he grew up watching restrictions imposed by the law hurt the eastern Arizona ranch his family has run since the 1800s. Udall said he does not want to scrap the law, but he believes it is in need of reform.

“I think the goal of everybody is to recover the species but also protect people’s economic livelihoods at the same time. That’s doable,” he said.

Many of the GOP bills were included in a similar packet of legislation last year that called for greater state input in the decision to list a species as endangered, simplified processes for removing them from the list and greater transparency in how data are factored into decisions by the U.S. Fish and Wildlife Services.

Democrats at Tuesday’s subcommittee hearing say the caucus’ new bills – coming on top of the administration’s changes set to take effect Thursday – further put endangered species at risk. Those changes were specifically targeted by one bill sponsored by Rep. Raul Grijalva, D-Tucson, the chairman of the Natural Resources Committee.

“We’re in the midst of an ongoing extinction crisis, and the Trump administration seems to be doing everything in its power to make sure that crisis continues,” Grijalava said at the committee hearing.

Speakers at the committee hearing championed the Endangered Species Act as a strong safeguard for more than 1,400 threatened or endangered animal and plant species in the U.S. They noted the threat of climate change, as well as the fact that 99% of species protected under the ESA have not gone extinct since the law was passed in 1973.

Earthjustice and Defenders of Wildlife are just two of several organizations that sued the Trump administration in August in an attempt to block the proposed changes to the law, which they say will weaken the act and were put forward without sufficient transparency.

But Republicans, some of whom were irked by Tuesday’s announcement that the House would open a formal impeachment inquiry, said it is the Democrats who pose a risk to both the industries that were represented at their event and to the species protected under the law.

“I think it’s really important that we get our message out as Republicans and I wish it was more bipartisan,” said Rep. Debbie Lesko, R-Peoria. “Unfortunately, the Democratic majority in the U.S. House of Representatives right now is really intent on undermining President Trump.”

Despite the distance between the two sides Tuesday, Gosar said he believes they can eventually come together, because reforming the ESA to increase the animals taken off the list is a measure “both sides can get behind.”