PHOENIX – The long lifespans of saguaros – up to 200 years – can complicate scientists’ attempts to understand their population patterns. Now, researchers from the University of Arizona and the U.S. Geographical Survey have used a 48-year data set to see how topography can influence how climate affects the majestic symbol of the West.

The findings appear in the journal Ecosphere.

The saguaro (Carnegiea gigantea), which ranges from central Arizona through Sonora and into northwestern Sinaloa, Mexico, is a keystone species that provides food and habitat for many plants and animals in the Sonoran Desert. In addition, it traditionally has been crucial to indigenous people in Arizona.

Previous research has tied population expansions and contractions to climate effects: Saguaros would propagate during wet periods and die off during droughts and deep freezes.

But when the authors studied more than 5,800 saguaros on Tumamoc Hill in downtown Tucson, they found an interplay between topography and climate conditions created pockets with differing patterns of growth and survival.

“By doing it in different places – you know, north, south, east and west slopes – we found some fairly different patterns. And if you just looked at an average plot, you’d make mistakes about projecting towards the future,” said Larry Venable of UA’s department of ecology and evolutionary biology, who was a co-author of the study. 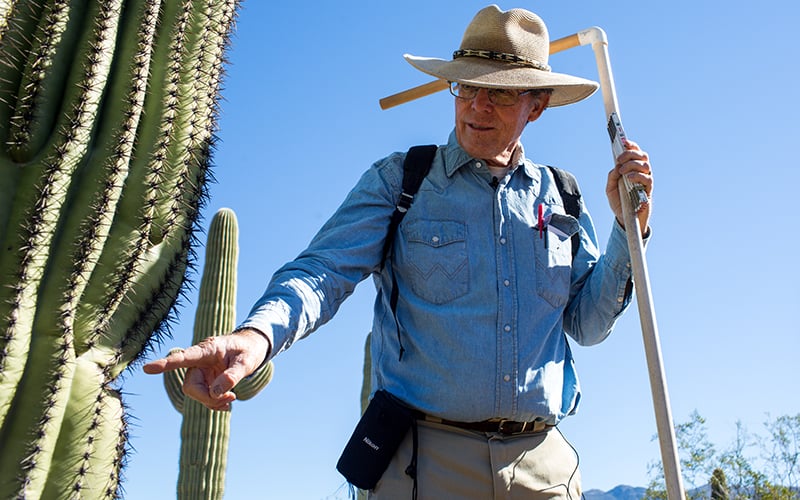 In one surprising example, young saguaros spread across a northern plot in years with several extremely warm days during a severe drought period.

Saguaros start as black, pinhead-size seeds spread by birds and bats feeding on the cactuses’ bright-red fruit. Although growing only about 1.5 inches a year as juveniles, saguaros can reach 60 feet in height and weigh more than 5 tons. Most, but not all, will grow arms, which allows the cactus to store more water and produce more fruit. The saguaro’s root system is shallow, spreading as far as the cactus is tall, but they also have a tap root that can descend to 2 feet.