Trucks line up on the Mexico side of the border to enter the U.S. through the Mariposa Port of Entry near Nogales in this 2011 file photo. Mexico is Arizona’s biggest trading partner, buying $7.5 billion in goods from the state in 2017. (Photo by Donna Burton/U.S. Customs and Border Protection) 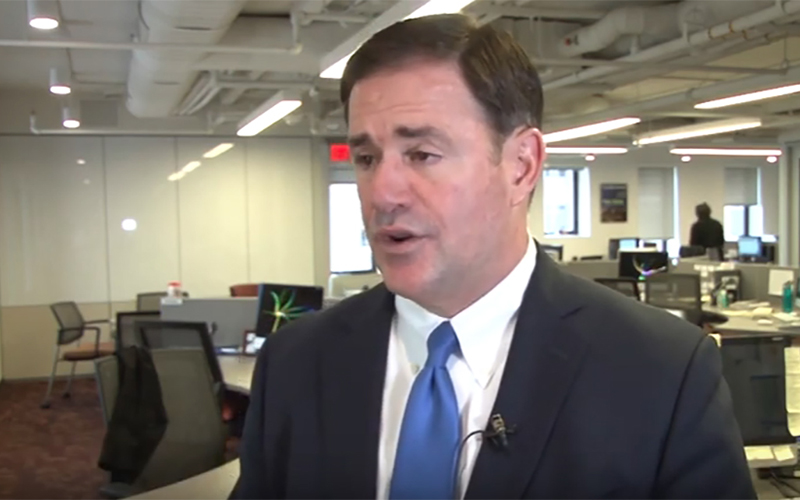 WASHINGTON – Arizona Gov. Doug Ducey joined business leaders in Washington on Monday to push for final approval of the “critical” U.S.-Mexico-Canada agreement and protect trade that is worth billions in trade to the state.

“America and Arizona’s businesses are beyond ready to ratify the USMCA,” Ducey said in a press briefing Monday. “Trade with Mexico and Canada is vital to Arizona’s economy, and it supports more than 228,000 jobs.”

The remarks came during the U.S. Chamber of Commerce’s annual meeting of local and state members from around the country. The meeting also featured comments by U.S. Trade Representative Robert Lighthizer, who is in charge of shepherding the deal through.

U.S. Chamber CEO Thomas Donahue introduced Ducey as “one of our greatest supporters,” describing Arizona as “closest to the action, next to Mexico.”

Ducey said Mexico has long been Arizona’s No. 1 trading partner, and Canada is now the state’s third-biggest trading partner. The state exported $9.7 billion of goods to those countries in 2017 – $2.2 billion to Canada and $7.5 billion to Mexico, according to data from the Officer of Trade Representative. The Business Roundtable said the state exported another $1.7 billion in services that year.

But Ducey, who said he has talked with officials from 100 chambers around the country, called a new trade deal important not just for Arizona, but for the other 44 states that trade with Canada or Mexico.

And Ducey said it’s not just the states that would benefit.

But a yes on the agreement has been elusive so far.

The framework for the deal was signed last summer by President Donald Trump, Canadian Prime Minister Justin Trudeau and then-President Enrique Pena Nieto of Mexico, but it still needs final approval from their three governments.

The Mexican Senate gave overwhelming approval to the deal this summer, but Congress has balked and Trudeau has said he wants to wait for the U.S. to act. And Canada now faces national elections next month.

USMCA is the Trump administration’s proposed replacement for the 25-year-old North American Free Trade Agreement, which opened the door to decades of robust trade between the three countries but which critics said had become outdated.

The USMCA includes new language on digital trade – prohibiting duties on e-books, games, software and the like – and extensions on protections for intellectual property, according to Lighthizer’s office. The administration said the new deal also includes protections for financial transactions, workers’ rights and the environment.

But some in Congress have raised concerns about those protections, particularly the ability to enforce sections dealing with labor rules, environmental concerns, and prescription costs, according to a May statement from House Speaker Nancy Pelosi.

Simon Lester, associate director for the Cato Institute’s Center for Trade Policy Studies, said one of the problems with NAFTA that remains in USMCA is that both lack a neutral party to judge whether a country violated the agreement.

Lester also questioned whether one of the administration’s stated goals – to give companies an incentive to move jobs from Mexico to the U.S. – is feasible. If it happened, he said, it could mean higher-priced cars and higher production costs for U.S. car makers with “a few new auto jobs at the expense of other people.”

But Lester did say USMCA’s new rule on digital trade is “one of the best examples” of
regulation of that kind, though he was not sure how it would work out.

Donahue said he is optimistic that Congress “should and will, in my opinion, pass the Mexico-Canada agreement this fall before the end of the year and eliminate any questions about the question of futures in trade with our two largest export markets and largest trading partners.”

The National Association of Manufacturers said that Arizona’s top exports to Canada and Mexico include electrical equipment, semiconductors, aerospace parts, motor vehicle parts, and other metal and plastic products.

Hamer said the USMCA would also help support the supply chain for a growing high-tech automobile industry in Sedona, among other benefits. He said the deal has “brought Arizona business communities together” behind the deal, and called for bipartisan support.

“It would be a failure of Congress to act on something that’s in front of them,” he said. “I’d say that Congress should demonstrate a greater love for our country than they have for a love of political party.”