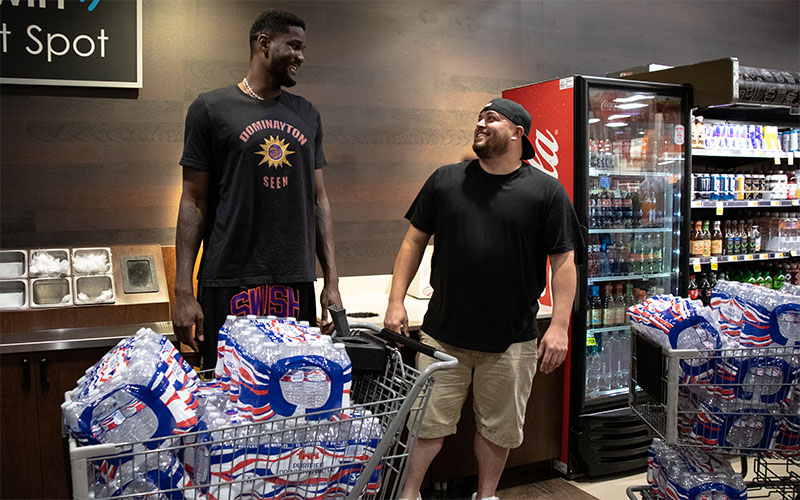 Phoenix Suns center Deandre Ayton hosted an item drive at Fry’s in central Phoenix to benefit those who were affected by Hurricane Dorian in the Bahamas. He posed for pictures with fans who donated items. (Photo by Sarah Farrell/Cronkite News) 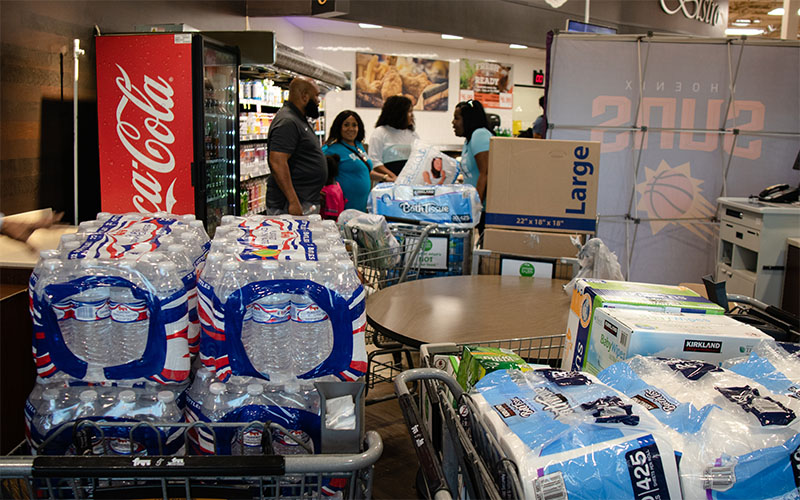 Ayton’s friends and family, as well as members of the Phoenix community, brought items to donate to those who were affected by Hurricane Dorian. They collected everything from canned food to bottled water to air mattresses. (Photo by Sarah Farrell/Cronkite News) 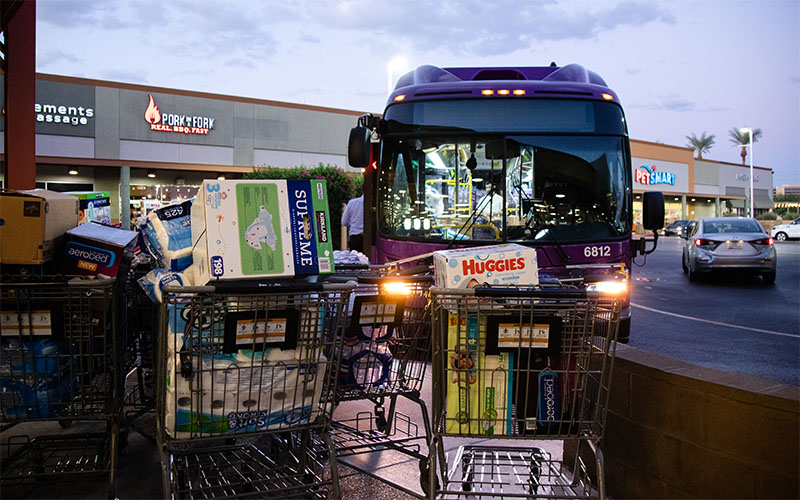 Valley Metro donated a bus to transport the supplies that were collected. Within an hour, the bus was nearly full of donated items. (Photo by Sarah Farrell/Cronkite News) 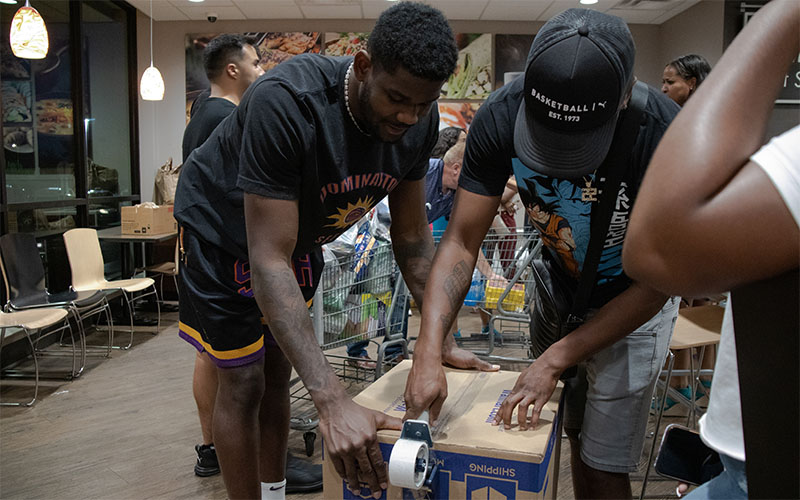 Ayton received criticism on social media for not responding immediately to Hurricane Dorian but he said he was focused on relief from the beginning. (Photo by Sarah Farrell/Cronkite News)

PHOENIX – As Hurricane Dorian approached the Bahamas, Phoenix Suns center Deandre Ayton had a good idea about what was in store.

Ayton grew up in the Bahamas, where his family experienced storms like Hurricane Katrina in 2005, which formed near there before spinning into the Gulf of Mexico and slamming into the Gulf Coast.

“We’ve been tracking the hurricane ever since it’s been around the Caribbean,” Ayton said. “So, we already knew what it was capable of and where it was headed.”

By the time it reached the Bahamas, Hurricane Dorian was a Category 5 storm that churned through the area from Sep. 1 to Sep. 3. It killed at least 50 people and the Bahamian government estimates over 1,300 people remain missing.

In an attempt to ramp up the Hurricane Dorian relief effort, Ayton made a $100,000 donation and teamed with the Suns and Fry’s Food Stores to organize a donation drive Tuesday to collect items such as toiletries, first-aid kits, water and non-perishable foods and money.

“It brings flashbacks and some of the stuff we went through when I was younger,” Ayton said. “I’m just trying my best to do stuff like this to take my mind off it and just keep it positive.”

Ayton said he knows how difficult it can be to bounce back from the damage a hurricane can cause.

“Growing up, I used to climb a lot of trees and just seeing all them trees blowing down in front of me and some of my friends losing their houses.” Ayton said. “It’s just a lot.”

Ayton is glad he is finally able to use his status as an NBA player for something beyond the court.

“I’m just happy I could use the platform I’m at right now to really just do some type of good cause,” Ayton said.

Some of his teammates, Cam Johnson and Jalen Lecque are here to support Ayton’s relief efforts. pic.twitter.com/hBhbU09wUg

Ayton was surprised at the amount of support he received for the drive.

“I just expected some fans and some family just helping pack. But, this is tremendous,” Ayton said. “This makes me want to grind harder everyday and put some smiles on people’s faces.”

Shaquin Albrow, senior coordinator of community and player programs for the Suns, said the effort filled a Valley Metro bus with donated supplies, along with monetary donations.

My guy @DeandreAyton with a huge assist in the community tonight! With the help of fans, he Lliterally raised a @valleymetro BUS LOAD of supplies & money to support his Hurricane Dorian Relief efforts. #MoreThanAGame 🇧🇸 ♥️ pic.twitter.com/Q9nwrkh4UX

Ayton was the top overall pick in the 2018 NBA draft and averaged 16.3 points and 10.3 rebounds as a rookie. His role is expected to expand in his second season under first-year coach Monty Williams.

The Suns open the season Oct. 23 against the Sacramento Kings at Talking Stick Resort Arena.