Two members on Northern Arizona University’s logging team demonstrate how to run a crosscut saw. It’s important to use the entire length of the saw. (Photo by Erica Block/Cronkite News) 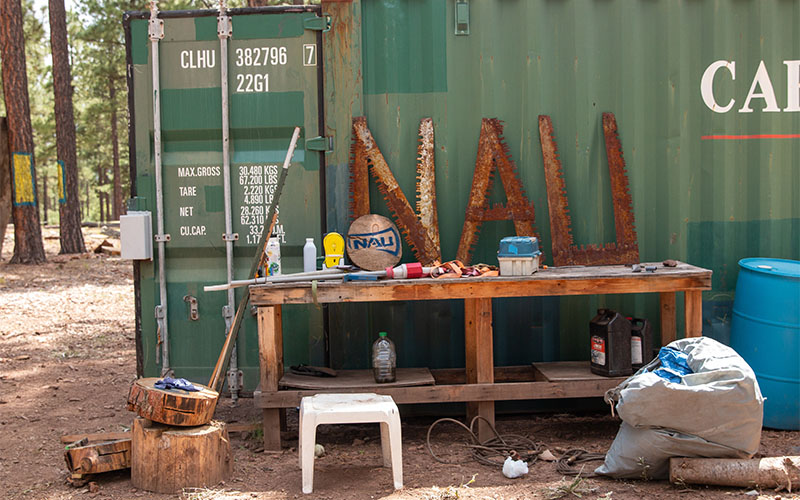 The team enjoys repurposing old saws that are no longer usable in the forest. (Photo by Erica Block/Cronkite News) 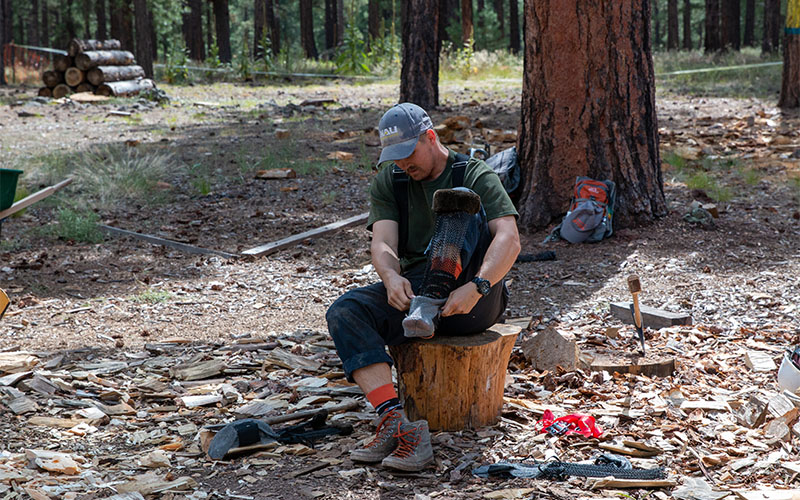 Logging sports require competitors to wear foot protection for any event requiring an ax. There are three options: metal shin guards, steel-toe boots and chain-mail socks (pictured here), which are worn inside the boots. (Photo by Erica Block/Cronkite News) 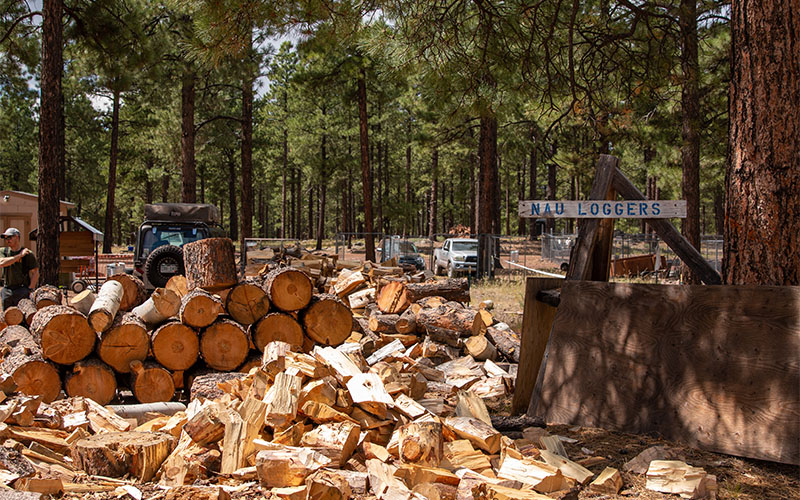 The logging team’s activities contribute to thinning efforts in the Centennial Forest. Because the forest is overgrown, the state has initiated thinning projects to protect against wildfires and restore damaged ecosystems. (Photo by Erica Block) 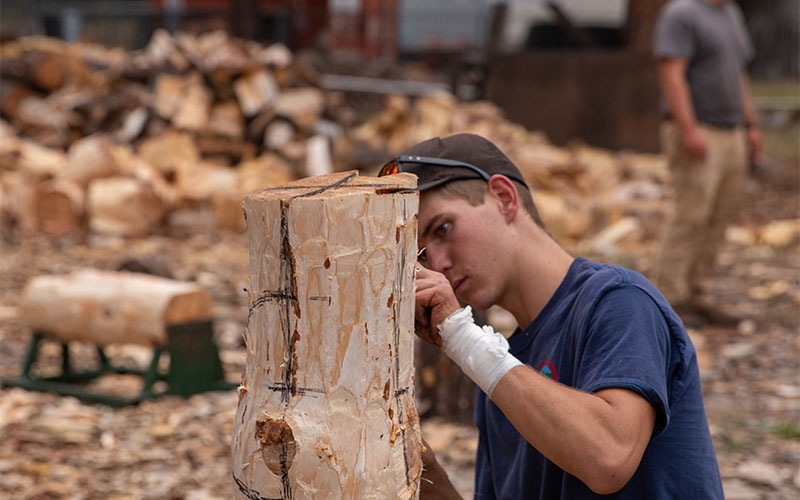 Noah Haarmann uses a crayon to draw lines on his log before demonstrating vertical chop. Drawing lines on the wood provides a guide, so he will know where to aim his axe. (Photo by Erica Block)

FLAGSTAFF – Nothing says rugged masculinity like a block of wood and a revved-up chain saw, a reporter for The Telegraph said. It’s a competition that summons primal aggression, according to the New York Times.

There’s no doubt about it. Lumberjacks are paragons of male strength, if we are to believe recent logging sports coverage.

But these depictions of lumberjacks are stereotypes. Describing logging sports as a testosterone-driven contest diminishes the deeper meaning of the sport and its history.

At Northern Arizona University, men and women compete on the same stage in an effort to expand and redefine what has historically been a male-dominated sport.

Most people haven’t heard of logging sports. The sport’s origins go back to the industrial revolution, when the U.S. economy relied on our nation’s thriving lumber industry.

It was after the end of World War II that the era of using hand tools in harvesting trees began to wane in the United States. Around that time, the North American logging industry began turning to machinery to handle the tasks previously performed by lumberjacks.

A coed sport at a number of colleges and universities across North America, logging sports are a set of competitive events that mimic old-time processes once used to harvest timber.

“Almost every event we do is modeled after a specific job or type of work done that was done in the woods,” said Noah Haarmann, a senior forestry major at Northern Arizona University and the captain of the logging sports team there.

Using tools powered by their own muscles, logging sports athletes face off in timed contests that employ techniques once used in forestry: log roll, pole climb, fire build, ax throw and a variety of wood block chopping and sawing races.

More than a spectacle, logging sports play an important role in preserving a brand of uniquely American history. By chopping and sawing wood competitively, the men and women on collegiate logging teams carry on the legacy and skills pioneered by male lumberjacks in the early 20th century.

And by doing so, these college students are also making logging sports more inclusive.

“People think, ‘Oh lumberjacks, they’re only guys.’ But the women, we’re right next to the guys. We chop alongside each other, train alongside each other. We work together. It’s a good community,” said Sydney Drop, a junior at NAU who’s been on the team for three years.

It’s unusual for men and women to be teammates, to say the least. Few college sports, if any, are coed. Logging sports may be the rare exception.

So, what is it like for the NAU men to compete in this sport alongside women?

“It’s amazing, I think,” said Josh Keuning, a junior forestry major on the team. “There are numerous women who are far better than any man I’ve ever seen. That’s pretty neat to see.”

Keuning says he really enjoys “jack and jill” events, particularly two-person sawing events that require a male and a female to pair up.

“You get two different perspectives,” he explained. “I think it’s good because most guys are pretty hard-headed about what they’re doing. I feel like women have a more thoughtful process. It creates balance.”

We know people benefit from experiencing diversity in classrooms and in workplaces. Perhaps sports teams are no different.

The NAU logging team practices in a clearing within the Centennial Forest, not far from the Arboretum at Flagstaff. Known as “the grounds,” the practice site is dotted with firewood piles, chopping platforms and sawing stanchions. Thousands of tall, green trees surround the students.

On a recent Saturday afternoon, several 13-foot-long crosscut saws lay parallel to one another on a folding table near the team’s equipment shed, with hatchets and other hand tools scattered across a nearby log. Eighteen members of the team were spread out in the clearing, demonstrating different wood chopping events to a group of first-year forestry students.

Some of the students had never heard of logging sports before. Others, including Elisa Whitby, were aware of the team’s existence before arriving at NAU.

Whitby said she’s familiar with logging work because she spent the last three summers volunteering at a National Park near her home. She was excited when she learned about NAU’s logging sports team.

“This is something I’ve always wanted to do,” she said. 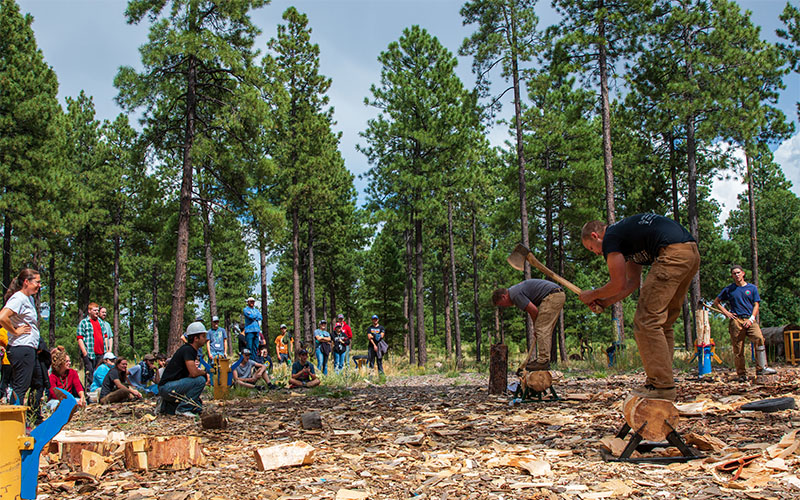 For NAU junior Garrett Thomas, being on the logging team enhances his understanding of forestry in northern Arizona – which he’s studying – as well as the capabilities of modern technology.

“It really makes me appreciate the work that lumberjacks did in the 1920s,” Thomas said. “We’re pretty blessed to have chainsaws. It takes a lot longer to cut down a tree with an ax.”

NAU didn’t always have a competitive woodsmen’s team, despite the university’s location and regional ties to the timber industry.

In its current iteration, the NAU logging team exists thanks to the efforts of Denver Hospodarsky, an associate professor of forestry at NAU. Until recently he served as the team’s faculty adviser, before passing the baton to Tom Kolb, a fellow professor at the NAU School of Forestry.

The NAU School of Forestry first organized its logging sports team in 1958, the same year the university was founded, Hospodarsky said, but at some point during the early 1980s, student interest and participation on the team waned. Before retiring last year, he had been working to restart the team since 2008.

Getting a college logging sports team off the ground isn’t easy. In addition to the prohibitive cost of equipment – a high quality racing crosscut saw can easily cost several thousand dollars – it takes time for students to develop skills and become proficient at chopping and sawing events.

And unlike other schools that NAU competes against, such as the University of Montana and California Polytechnic State University, NAU doesn’t employ a full-time coach. This means the team doesn’t benefit from the kind of tutelage a college logging sports coach can provide.

Instead, new students who join the team must rely on team veterans to teach them the skills they need to learn for competition, from cutting footholds in a log to proper angling and ax technique.

“It’s really on us to pass on the knowledge and skills,” Sydney Drop said. “Our team won’t exist in ten years if we don’t teach new people the techniques they need to compete.” 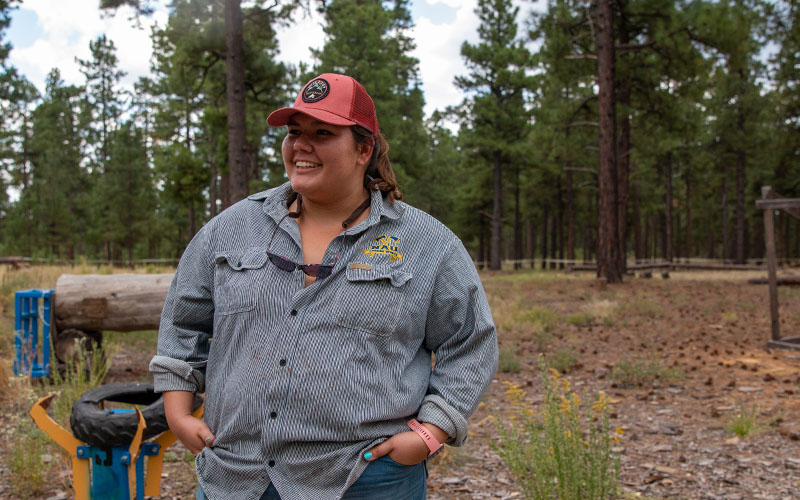 Sydney Drop says her favorite event is the power saw competition. Running a chain saw may look easy, but in reality, the events require great skill and precision. (Photo by Erica Block/Cronkite News)

Iliana Castro, an NAU graduate student and team veteran, pointed out that being on the team is a real commitment. Logging sports can be time consuming in ways that mainstream sports are not.

In this way, the NAU logging sports team and competitive logging sports as a whole operate with a similar kind of purpose. Just as members of the team need to pass down a body of knowledge to ensure the team lives on, lumberjack competitions, on a larger scale, work to keep a set of skills and historical traditions alive.

Moreover, those skills and traditions are carried on by people who would have been excluded from forestry work at lumberjack camps in the early 1900s.

“It’s really an all-inclusive sport,” Keuning said. “You’ll see everyone cheering everyone else on. Everybody wants to see everybody else get better. It’s all about teaching people skills and bettering yourself and others.”

Castro agreed with Keuning and said the team is stronger and more unified than any single-sex sports team could be. The sport creates a space where men and women are equally capable.