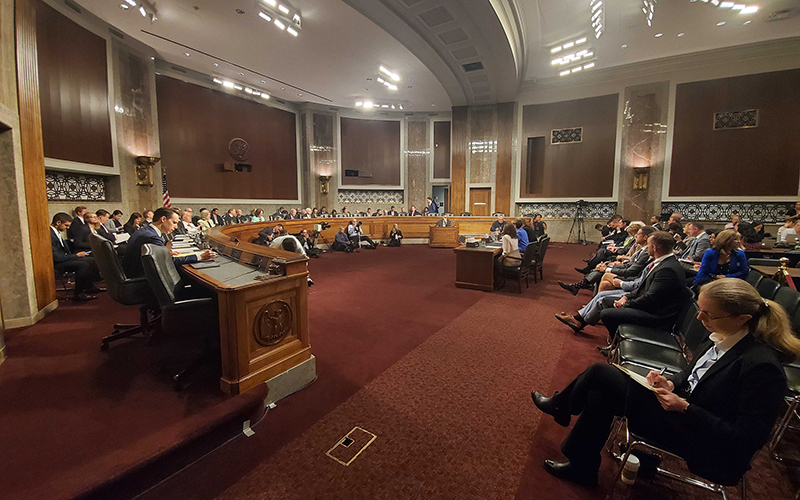 The Senate Armed Services Committee pressed Air Force secretary nominee Barbara Barrett on the use of Defense funds for a border wall, but generally went easy on her. (Photo by Wissam Melhem/Cronkite News)

In a hearing on her nomination to be next Air Force secretary, Arizona resident Barbara Barrett dedicated much of her opening statement to the need for a space force. (Photo by Wissam Melhem/Cronkite News)

WASHINGTON – Arizona businesswoman Barbara Barrett might have been the subject of a Senate hearing Thursday on her nomination to be the next Air Force secretary, but it was President Donald Trump who was often the focus.

In an otherwise amicable confirmation hearing, some senators pressed Barrett and Ryan McCarthy, the Army secretary nominee at the same hearing, on their response to the Trump administration’s plan to divert $3.6 billion from military projects toward a border wall.

“I would look to work cooperatively with the Senate, but I would also look to conduct every action in compliance with the law and the constitution,” Barrett said about fund diversion, adding that her “commitment would be to the Constitution.”

Barrett gave a version of the same answer when she was asked whether she would ban Pentagon use of Trump hotels for military travel. But most of the questioning was about home-state projects from senators who said they look forward to working with Barrett.

She was introduced by Sen. Martha McSally, R-Ariz., who praised Barrett’s role in causing “one of the biggest paradigm shifts” in the military of the last few decades when she helped expand air combat roles for women.

“As the only female pilot serving on the Defense Department Advisory Committee on Women in the Services, she was instrumental in recommending that women be allowed to compete for and fly in combat … paving the way for thousands of women like me to serve our country with distinction in air combat,” McSally said.

She said Barrett has the essential credentials and experience for the job of Air Force secretary.

Editors: A previous version of this story misidentified Barbara Barrett’s affiliation with Aerospace Corp. in the eighth graf. She was chairwoman of its board. The story here has been corrected, but clients who used previous versions are asked to run the correction found here.

Barrett, who earned bachelor’s, master’s and law degrees at Arizona State University is a businesswoman who was the founding chairman of Valley Bank of Arizona, former board chairwoman for the Aerospace Corp. and former deputy administrator of the Federal Aviation Administration. She has served as U.S. ambassador to Finland, was a senior adviser to the U.S. Mission to the United Nations and was on the Council on Foreign Relations.

She and her husband, former Intel chairman and CEO Craig Barrett, have donated millions to Arizona State University, which has named its honors college and its office building in downtown Washington, D.C., for her.

In her opening statement to the Senate Armed Services Committee, Barrett touched on some of the challenges facing the Air Force, including suicides, sexual assault, military training and inadequate housing for service members and their families. But she used much of her statement to address the need for a Space Force, which she said would be the “key imperative” of her tenure.

“We must be prepared to defend critical space assets, increase the resilience of our space enterprise and be prepared to fight and win should deterrence fail,” said Barrett, adding later that if the U.S. does not lead in space, the Russians and Chinese will.

But questions about military needs were largely confined to senators asking for support of home-state projects.

Democrats tried to press Barrett on the recent decision to use Defense Department funds for border projects, asking what she would do as secretary if Trump wanted to continue to “raid military funds” for projects of his own.

Her diplomatic answer was not a good enough for senators in states where military funds have been diverted, like Sen. Martin Heinrich. The New Mexico Democrat complained about the loss of $85 million from planned projects at Holloman Air Force Base in his state.

“Are you aware of the fact that current trainees are resorting to using duct tape to patch holes in the walls in the ceilings of their training facility?” Heinrich asked. “I think we can do better than that.”

Sen. Richard Blumenthal, D-Conn., tried to pin down Barrett on recent reports that Air Force crews have stayed overnight several times at Trump’s Turnberry resort while on official business in Scotland. Blumenthal asked if she would impose a policy to prohibit all Air Force personnel from staying at Trump properties, but Barrett promised only to look into the issue.

In the most memorable exchange, Sen. Angus King, Maine independent, told both nominees that he believes Trump’s decision to divert Pentagon funds for a wall is illegal and that it sets a precedent that “will haunt this institution” for many years.

“Maybe the president misstated,” King said of the president’s campaign pledge that Mexico would pay for a border wall. “He meant New Mexico was going to pay for the wall, not Mexico because that’s what’s happening here and it’s not right.”

No vote has been scheduled on the nominations. But in an interview after the hearing, Barrett said she believed it went well and that she hopes to be confirmed.

“I’m proud to have the privilege of serving in the government in the past and it would be a great privilege to serve again,” she said.