PHOENIX – More than 100 Phoenix first responders, dignitaries and members of the public gathered Wednesday morning at City Hall to commemorate the 18th anniversary of the September 11th terrorist attacks. The somber, heartfelt memorial included bagpipers playing “Amazing Grace,” displays of structural steel from the World Trade Center and the Flag of Heroes.

Among those paying respects was Bill Canner, a retired New York City fire captain, who remembered the hopelessness after the mid-morning attack on the Twin Towers.

“It was a horrific day, obviously. (I was) on duty on-site that day. The optimism that we were going to find pockets of survivors … never found any,” Canner said.

Canner and other rescuers searched the rubble at ground zero for months after the attacks; closure for the families and co-workers of the victims took even longer, he said. To this day, Canner can’t bear to look at the pictures of the fallen first responders, many of whom were his friends. 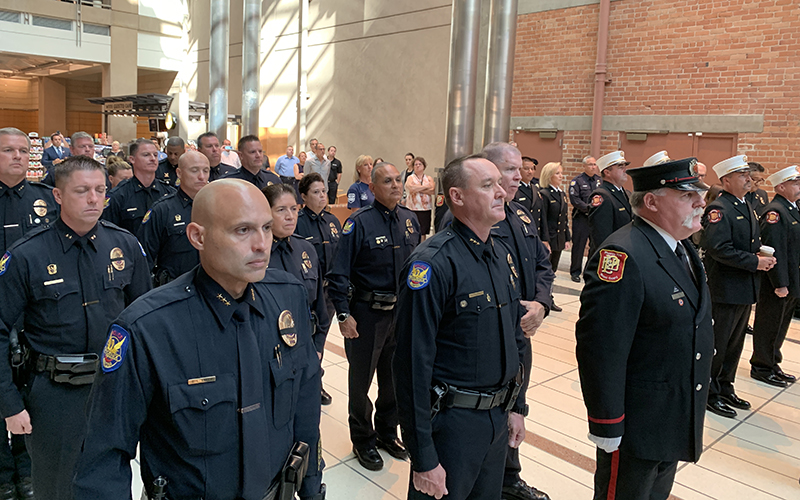 Phoenix Police and Fire Honor Guard stood at attention for the duration of the ceremony. (Photo by Rio Paynter/Cronkite News)

Canner was with the NYFD from 1973 until his retirement in 2003; he and his wife moved to Arizona the same year. They spend each 9/11 anniversary going to memorials around Arizona to pay their respects for the nearly 3,000 people who lost their lives in New York, at the Pentagon near Washington, D.C., and a field in rural Pennsylvania. This was the Canners’ first time attending the memorial at City Hall.

“The city of Phoenix has done a very respectful, touching ceremony,” Canner said.

The ceremony, hosted by Phoenix Fire Battalion Chief Reda Bigler, included a performance by the Arizona School for the Arts Chamber Singers of “Let My Love Be Heard,” which Jake Runestad wrote in response to a coordinated series of terrorist attacks in Paris in 2015. The group also sang “America the Beautiful.”

Included in the ceremony was the firefighter tradition of sounding a bell. Bigler said a bell traditionally was struck to signal the start of duty, the end of duty and the loss of a fallen brother or sister. 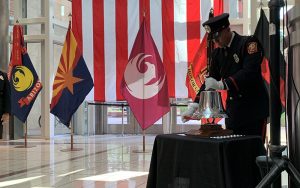 The Phoenix Fire Department performed a traditional sounding of the bell to remember the New York City firefighters who died in the attacks on the World Trade Center. (Photo by Rio Paynter/Cronkite News)

“Today, we again use this tradition to help describe our feelings, our passion, our sorrow and our respect for all the first responders who died on September 11th, 2001,” Bigler said. “For our fallen brothers and sisters of 9/11/2001, we give you the sounding of the bell. The unique FDNY signal called ‘five of four.’”

Capt. Kenny Overton with the Phoenix Fire Department recalled where he was on the day of the 2001 attacks: a student at Arizona State University’s Walter Cronkite School of Journalism and Mass Communication.

“I remember that I was leaving campus to go study at my parents’ house and I arrived and saw the second plane hit the tower,” Overton said. “I thought it was a replay of the first plane. So I witnessed it live.”

Overton credits the attacks for pushed him into public service and becoming a firefighter. He helps with the Memorial at City Hall every year.

CORRECTION: A previous version of this story misspelled Phoenix Fire Captain Kenny Overton’s name in the tenth paragraph. The story has been corrected, but clients who used earlier versions are asked to run the correction that can be found here.