Leilani Mitchell (left) and Brianna Turner are both important parts of the Phoenix Mercury’s playoff team, especially because of injuries the team has faced this season. (Photo by Sarah Farrell/Cronkite News)

PHOENIX – Brittney Griner can’t imagine where the Phoenix Mercury would be this season without Leilani Mitchell.

“We honestly may have not made the playoffs,” Griner said.

Mitchell has been a difference-maker, persevering through a challenging family dynamic and news that she was cut before this season. She has also thrived despite a tag as the second-shortest player in the WNBA.

That tenacity combined with her performance throughout the season is a key reason that the eighth-seeded Mercury advance to the postseason and will play the fifth-seeded Chicago Sky in a single-elimination, first-round matchup Wednesday night in Chicago.

Before the season started, the Mercury knew that star guard Diana Taurasi would not be available for most of the season as she had back surgery in April. With Taurasi out, Mitchell said Mercury coach Sandy Brondell sat down and talked with her early in the season to emphasize that she should be more aggressive offensively and bring a scoring mentality.

Mitchell did that and more as she had career-high averages with 12.8 points, 4.0 assists and 3.0 rebounds per game in mainly a starting point guard role in her 11th season in the WNBA. Although the Mercury had many injuries and suspensions throughout the season, Mitchell remained consistent, which helped counteract that adversity and propel the Mercury into the WNBA Playoffs.

Mitchell almost didn’t play for the Mercury this season.

On May 23, the team announced that it had cut Mitchell to stay under the $996,100 salary cap a few days before the season started, which made her an unrestricted free agent.

“It was tough,” Mitchell said. “It is not a great feeling knowing that you are the one that they chose to cut, even for salary-cap reasons. They told me that they didn’t want to, but at the end of the day, they had to choose someone and they chose me.”

After she cleared waivers, Mitchell had the opportunity to sign with any team that made her an offer. Mitchell said she decided to return to Phoenix, though, because the love for her teammates and the organization. She re-signed on June 5 and made her season debut the next day.

“Look, (Mitchell) is very important,” Brondello said. “She has had a great season, and we are always good when Leilani is aggressive (trying to score or create chances). … She is our little floor general out there.”

Mitchell, who is 5-foot-5, is listed as the second-shortest player in the WNBA, behind only Brooke McCarty-Williams on the Dallas Wings, who is 5-4.

Despite her stature, Mitchell doesn’t shy away from contact and doesn’t hesitate to drive into taller players. This mindset set in at a young age in Richland, Washington, as she learned from her five brothers – Tyler, Troy, Travis, Reggie and Robbie – who helped her with her aggressiveness, physicality, competitiveness and feistiness as an athlete.

“I was always a tomboy growing up,” Mitchell said. “I didn’t really have dolls or anything. I just played with them all the time. That is what got me into sports. … I used to play football with them, and they would push me into the rose bushes.

“They would have me put boxing gloves on and, then, they had me fight the little neighbor boys. I was just one of them.”

Although Mitchell had a challenged-filled path to have a career-best season in 2019, she has had a more stressful journey the past few years with her engaged partner Mikaela Dombkins, a current WNBL player in Australia. 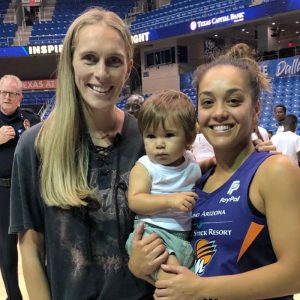 After all the complications, it took more than two years for the moment to finally arrive.

“It was an extremely long journey and emotional process …” Mitchell said. “We are just very grateful that it finally worked and we have the absolute love of our life in Kash. He has been the biggest blessing and he means everything to us.”

When Mitchell found out that the insemination procedure in Phoenix was successful and Dombkins was pregnant in Australia, she was almost 8,000 miles away playing basketball overseas in Turkey for Hatsay BSB. Mitchell attended all the doctor appointments via FaceTime, other than the not-so frequent visits she was able to make.

For Mitchell, she said “it was the most amazing feeling” when at six weeks they heard the heartbeat. She thought that would bring her relaxation.

But, that was far from the truth as her stress reached new levels.

“I didn’t realize that (pregnancy) is so stressful because every time that you go to an appointment, they tell you all these things that could go wrong,” Mitchell said. “Of course, then, when you just get on the internet and start reading.”

As Mitchell finished her season in Turkey, the FaceTime calls continued as she helped Dombkins with certain things.

“She hated being pregnant,” Mitchell said. “Every day it was her complaining that she felt sick or that she was gaining weight, and she didn’t like it. … I was basically on FaceTime all day. Other than practice and playing, you just sit there in Turkey..”

Initially the plan was to have Dombkins go through the final pregnancy stages in Phoenix alongside her mother during the WNBA season, but Mitchell said that a change had to be made because Dombkins’ sister also announced that she was pregnant.

As Dombkins entered those final stages, Mitchell became more and more stressed as the Mercury season went on because she wasn’t in Australia to help. After the season, she returned to Australia to play her first season with the Canberra Capitals, which won the WNBL Grand Final.

Most importantly she got to be with Dombkins and Kash.

With Kash, Mitchell has comfortability because she learned a motherly instinct from her Australian mother, Eleanor Majid, who died from cancer in 2009.

“I have always loved babies,” Mitchell said. “I went to school to be a primary school teacher because I loved kids. It just comes natural to me. I know some people aren’t really around kids that much, but I had always been around babies. My mom would always babysit other kids when I was young and I would always help.”

Mitchell loves kids so much that she thinks the stage Kash is about to be at – where he cries all the time and throws tantrums – is fun.

She went to Australia for the first time in 2013 to meet relatives because her mother always wanted Mitchell and her siblings to visit there or live there. Mitchell said she ended up loving the country, the culture and the environment, which in turn allowed her to meet Dombkins.

Mitchell knows that her mother would be proud and would have loved to meet Kash.

‘It will be bittersweet’

This season has been different for Mitchell.

Last season, Mitchell said that she just never found a groove. Mitchell described it as a “down” season as she averaged 4.4 points, 2.3 assists and 1.4 rebounds, playing a limited role. Mitchell equated some of her struggles last season to that stressful time in her personal life with Kash and Dombkins.

With the significant improvement this season in basically every statistical category, Griner believes that Mitchell should receive recognition.

“She should get (the) Most Improved (Player award), honestly …” Griner said. “Leilani definitely needs to get that.”

If she were to win the Most Improved Player award, Mitchell would make history. She would be the only player to win the award twice. In 2010, she won the award in her third season in the WNBA when she had her previous career-high in points (9.3), assists (3.8) and rebounds (2.6) with the New York Liberty.

Although she believes she has been productive in her specific role, Mitchell equates the success this season to her improved opportunities while Griner has helped make things easy with effective screens with her 6-9 frame.

Dombkins and Kash also stayed in Phoenix and traveled with Mitchell for most of this WNBA season but left for Dombkins to play in the WNBL a few weeks ago. This – along with Kash actually born – had relieved the personal-life stress that Mitchell had at this point in 2018.

With that, Mitchell enters the WNBA Playoffs with not only an improved mindset but also more confidence.

“It might sound funny to everyone else, but with the talent that we have, I still think that we have a chance to go all the way,” Mitchell said.

Despite that confidence, Mitchell also wants to return to Australia to be with Kash and Dombkins.

“I want us to do well, but it will be bittersweet when the season ends,” Mitchell said.