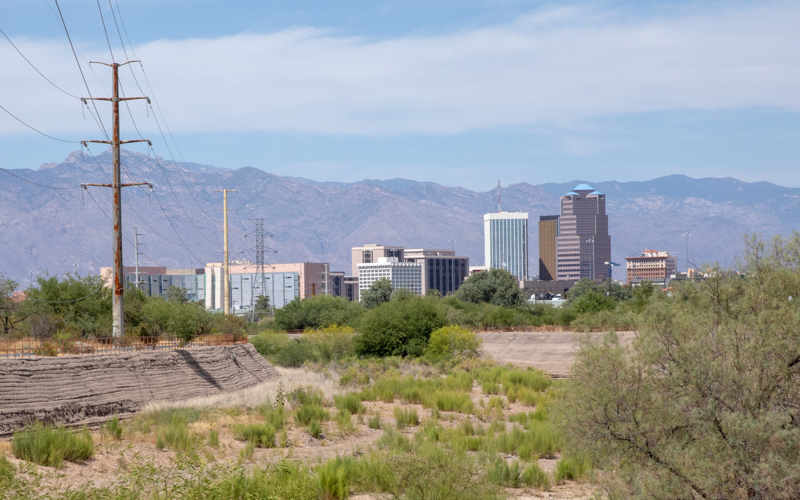 Tucson Water reports a high level of contamination of per- and polyfluoroalkyl chemicals in groundwater near the city’s airport. But the utility says that water isn’t part of its drinking water supply. (Photo by Dylan Simard/Cronkite News)

PHOENIX – Tucson Water has found a very high level of chemical contamination in groundwater north of the city’s airport, but the utility says the tainted water is not part of the city’s drinking water supply.

Recent testing detected concentrations of per- and polyfluoroalkyl substances (PFAS), which can lead to cancer and other harmful health effects, at 10,000 parts per trillion near the Arizona Air National Guard area at Tucson International Airport. The federal Environmental Protection Agency in 2016 set a health-advisory level of 70 parts per trillion for PFAS. EPA health advisories, however, are “non-enforceable and non-regulatory.”

“That’s not in an area of the groundwater that Tucson Water uses,” said Tim Thomure, the utility’s director. “It is important to note that there are a number of private well owners in the area,” but those private wells aren’t connected to the city system.

PFAS can be found in stain- and water-repellent fabrics, nonstick products like Teflon, polishes, waxes, paints and cleaning products, but Thomure said the contamination near the airport likely came from aqueous film-forming foam used to fight aircraft fires.

“It’s been commonly used in airfields, and Tucson has a couple of them,” he said. “That’s a likely source for this contamination.”

The Air National Guard in Tucson said it halted its use of that kind of foam last year, according to the Arizona Daily Star. The military has used aqueous film-forming foam since 1970, according to a consultant’s report on the guard’s use of the toxic foam.

Over the past two years, Tucson Water has shut about 18 wells in other areas with high readings of PFAS.