A $30 million construction project budgeted for this year at Fort Huachuca would be delayed as part of a Pentagon plan to divert $3.6 billion of military project funding toward construction of a southern border wall. (Photo by Staff Sgt. Vanessa Valentine/U.S. Air Force)

WASHINGTON – Border construction near Yuma will receive almost $1.3 billion of the $3.6 billion the Defense Department said it will divert from planned military projects under the national border emergency declared in February by President Donald Trump.

Among the 127 Pentagon projects scheduled to lose funding this year for Trump’s border construction push is a planned ground transport equipment building at Fort Huachuca. The Army base near Sierra Vista will lose $30 million that was budgeted for that project in fiscal 2019.

The funding shifts – announced in a letter to lawmakers Tuesday and calls Wednesday to those who lost projects in their districts – sparked outrage from Democrats, many of whom accuse the president of robbing the military to feed his ego.

“They are illegally stealing money from our troops for a useless border wall that Congress resoundingly denied,” said Rep. Ruben Gallego, D-Phoenix, in a statement.

“It violates bipartisan congressional intent; it violates the U.S. Constitution; and it violates our nation’s fundamental values,” said Gallego, a Marine Corps veteran and member of the House Armed Services Committee.

But in his letter Tuesday to the committee, Defense Secretary Mark Esper said the money would be directed toward border projects that would allow for more efficient use of active and reserve troops – which were ordered to the border by Trump. He called the border projects “force multipliers” for the troops on the border.

Esper identified 11 projects that would build or replace a total of 175 miles of pedestrian fencing or vehicle barriers along the southern border. Four of those projects would be in or around Yuma: Just under $1.2 billion for more than 60 miles of barriers in the Barry M. Goldwater Air Force Range and the Cabeza Prieta National Wildlife Refuge, and another $65 million for construction of about three miles of pedestrian fencing around the Andrade Port of Entry. 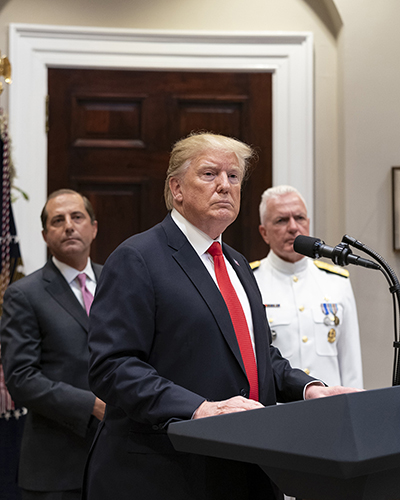 President Donald Trump defended the use of Defense Department funds for construction of border barriers, saying he expects hundreds of miles to be built by the end of next year. (Photo by Shealah Craighead/White House)

The Pentagon in March had identified as many as $12.9 billion in projects that might be tapped for border construction funds, before releasing the final $3.6 billion list this week. Esper said military housing was specifically excluded from projects targeted for funds and that half of the military projects, which would be tapped first, were overseas.

That did little to calm critics.

“Rather than address critical defense needs like readiness, modernization, and disaster recovery, the Trump administration is stealing funds from the military to fulfill a partisan campaign promise,” said a statement from Rep. Adam Smith, D-Wash., the House Armed Services Committee chairman.

The fund diversion was made possible under a section of the federal code that allows the Defense secretary to carry out construction projects, without explicit congressional approval, during a period of national emergency that requires the use of troops.

Trump declared that emergency in February, after a 35-day government shutdown that began when he refused to sign a budget Congress passed that did not include funding he wanted for border security.

At the White House on Wednesday, Trump insisted that the border wall that was a key element of his 2016 election campaign “is going up rapidly,” and predicted that hundreds of miles would be completed “sometime right after the election” next year.

Rep. Raul Grijalva, D-Tucson, whose district includes Yuma and the Goldwater Range, said in a statement that, “The only national emergency is Trump’s narcissism.”

Democratic Reps. Tom O’Halleran of Sedona and Greg Stanton of Phoenix echoed those criticisms, with O’Halleran calling the wall “unnecessary.” Republican members of the state’s House delegation did not respond to requests for comment Wednesday.

Sen. Martha McSally, R-Ariz., applauded the move to secure the border, but expressed frustration that Fort Huachuca had been targeted. She blamed the Army’s failure to finish an environmental cleanup at the base for delays that left the base’s new ground transport equipment building as a target for budgeters.

“The fact of the matter is that had the Army completed this sooner, the project would not have been delayed and would not have even been up for discussion,” McSally said in a statement.

Rep. Ann Kirkpatrick, D-Tucson, whose district includes Fort Huachuca, said the equipment building is needed to house military vehicles and “vital” electronic equipment that is currently being stored outside. She blasted the decision to take money from the project.

“Today, the president has made it clear he is willing to protect his own political chamber over our military resources,” her statement said. “Ultimately, this type of decision-making puts all Americans at risk.”