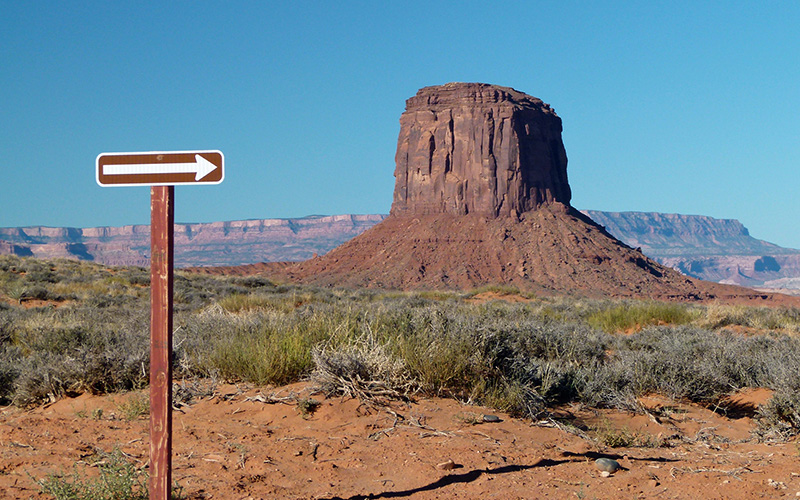 Despite vast open spaces, like those in Monument Valley, privately held land on the Navajo Nation can sometimes be split into such small parcels that the land is unusable, one of the reasons for the federal land buyback program. (Photo by penjelly/Creative Commons)

WASHINGTON – Time is running out for Navajo landowners who want to take part in the second round of a $1.9 billion federal program to buy back scattered and isolated parcels of land on the Navajo Nation.

Friday was the last day for some owners of Navajo land in New Mexico to apply for a payout under the Land Buy-Back Program. Tribal members in Arizona, Utah and New Mexico’s Ramah, Alamo and Canoncito areas have until Sept. 30.

The Interior Department estimates that there may still be $157 million of Navajo lands that could qualify for this second phase of the Land Buy-Back Program, which has been operating since 2012. Notices went out this summer to 19,978 Navajo landowners, but only $24 million had been claimed as of Aug. 16, according to data from the program.

Calls to Navajo Nation officials this week were not returned, but one expert said the program is important not only for individual landowners but for the economic wellbeing of the tribe as a whole.

“One of them (a tribe) in the Southwest was looking to do a major electrical right-of-way, and so when they did their buy-back they asked the department to prioritize those allotments,” Stainbrook said.

The Land Buy-Back Program was part of a $3.4 billion settlement of a class-action suit filed against the Interior Department by Native Americans who claimed that, for more than a century, the government had mismanaged tribal property that it was supposed to be holding in trust.

The so-called Cobell Settlement included money for individual payments, creation of an advisory committee on tribal trust reform and establishment of a scholarship fund for Native American students. But the largest portion was the land buy-back program.

Editors: An earlier version of this story gave a wrong deadline for some owners of Navajo land in New Mexico to apply for the buyback program. Aug. 30 was the deadline in parts of New Mexico, but Sept. 30 is the deadline in Arizona, Utah and New Mexico’s Ramah, Alamo and Canoncito tribal areas. The story here has been corrected, but clients who used previous versions are asked to run the correction found here.

It was aimed at consolidating “fractionated” property, land that was granted to tribal members in the 19th century but divided so many times over the generations that the parcels became useless for economic development – when their ownership could be traced at all. According to the program’s website, land buy-backs address this issue by purchasing fractionated plots and giving the allotments back to the tribes.

This is the second round of the program on the Navajo Nation. The first came in 2016, when the government paid out $108 million to 11,355 individual landowners consolidating a little more than 155,000 acres of land.

At a congressional hearing in 2017, an Interior Department official complained that the first round of buy-backs had made little progress in consolidating fractionated lands across the country, while burning through $1.2 billion of the settlement fund that was supposed to last until 2022.

Navajo officials agreed at the time that the program was underfunded, but they said it had helped make a dent in the problem of fractionated properties on their land.

Funding is not the only hurdle: One major impediment to collecting settlement claims has been addresses. In an Aug. 21 press release, the Office of the Special Trustee for American Indians estimated that 1,700 Navajo Nation landowners do not have up-to-date addresses with the agency.

And selling to the government is not the only option. Stainbrook said some plot holders have the option of swapping plots of land with others in order to concentrate disparate claims into a single continuous block, making the land more economically viable by combining different holdings.

But for some Native plot holders, Stainbrook said, selling their land is not an option.

“You go out there and talk to families, and the thing you constantly hear is that’s grandma or grandpa’s land and they said never to sell it,” Stainbrook said. He also noted that for some Native Americans who live off tribal lands, the parcels may be the only connection they have to their heritage.