A sign warning fans of the danger of flying objects is posted behind home plate at Citizens Bank Park in Philadelphia. (Photo by Rich Schultz/Getty Images)

PHOENIX – Spending an afternoon at the ballpark comes with a warning on the back of the ticket. Whether they realize it or not, fans assume the risk of being hit by a foul ball or errant splinter from a broken bat. When balls enter the stands, fans clamor to collect a souvenir, but some foul balls, especially line drives, prove dangerous to fans.

Two young fans have suffered serious injuries this season after being struck by line drives. The first was a 2-year-old girl at the Chicago Cubs vs. Houston Astros game May 29, and the other was a young girl at the Colorado Rockies vs. Los Angeles Dodgers game June 24. Both were hospitalized with serious head injuries.

These injuries have reinvigorated the debate about protective netting at baseball stadiums.

“One more fan having a severe injury or, in a really unfortunate situation, a death is something that is unacceptable,” Los Angeles Dodgers pitcher Rich Hill told the Los Angeles Times. “You come to the ballpark for a reprieve and to take a break from the hectic schedule of life to enjoy watching us go out there and play. And you want to feel comfortable and safe.”

According to a 2014 study by Bloomberg, foul balls strike about 1,750 fans each year.

The Washington Nationals extended the netting to the right and left field corners during the All-Star break in July. Mark Lerner, managing principal owner and vice chairman, called it a preemptive measure to improve fan safety.

The Arizona Diamondbacks installed netting at Chase Field to the end of the dugouts in 2018 but have not made a decision on extending it farther.

The debate from both sides

Not all fans are on board with these changes, though. Fans, especially season ticket holders, are afraid their view of the field will be obstructed and they won’t be able to catch foul balls.

“We sit here (down the third-base line) because of no netting,” Cubs fan Timothy Derby told the Chicago Tribune. “I understand behind home plate, but to have it extend to the foul pole is kind of like an obstruction. It’s not baseball.”

The debate was renewed in 2017 when a young fan was hit in the head by a foul ball at Yankee Stadium. That incident led to the 2018 mandate extending all netting to the end of the dugout. Beyond the league minimum, the decision on netting is left to each team.

Professional baseball teams in Japan take a different approach. The Tokyo Dome, according to Forbes, has had netting from foul pole to foul pole since it opened in 1988. In addition, extensive signage warns fans of the dangers of foul balls, ushers have whistles they blow when a ball leaves the field of play and the ushers check on fans after each foul ball that enters the stands.

To satisfy thrill-seekers, the stadium offers “excite seats” in front of the netting that give fans an unobstructed view of the action. But safety is still paramount. The seats come with a helmet and glove for each fan.

Baseball isn’t the only sport in which fans can be injured by objects leaving the field of play though. Hockey, cricket and golf face similar issues.

Nearly two decades ago, there was no netting at hockey arenas. But in 2002, 13-year-old Brittanie Cecil died from injuries she suffered after being hit in the head by a puck at a Columbus Blue Jackets game. The NHL was quick to act. By the end of the season, it mandated every team install 18-foot-high nets in the corners and ends of the ice. The nets haven’t eliminate fan injuries, but Cecil’s death remains the only one in NHL history.

Golf courses do not have protective netting; it would prevent players from addressing the ball where it lands. Ushers and a thin rope are all that separate fans from the action.

Fans have been hit in the head by balls during competition, but few strikes have resulted in serious injuries. Most recently, a woman was struck at the 2018 Ryder Cup, leaving her blind in her right eye.

Golf is unlikely to add protective barriers between fans and the course. Rather, the sport will continue to rely on players yelling “Fore!” and vigilant ushers to warn of incoming balls. 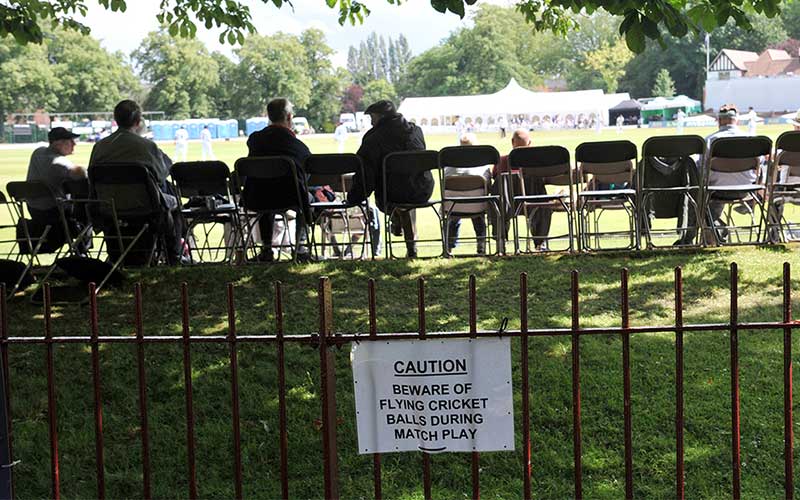 Spectators at the Derbyshire vs. Yorkshire match at Queens Park, Chesterfield, United Kingdom are reminded of the dangers of watching cricket. (Photo by Neal Simpson – EMPICS/PA Images via Getty Images)

Cricket grounds also lack protective netting for spectators. Although some space exists between the field and the stands, no barrier separates fans from incoming balls. In Australia, preventive measures include verbal and visual warnings.

“At all our matches, we continually warn fans of this hazard through PA reads with accompanying vision screen graphics, as well as targeting bays likely to be affected during warmup drills,” a spokesman for Cricket Australia told the Sydney Morning Herald. “We provide education of certain shots over the PA system and vision screen, particularly with a free hit, with the sounding of the siren, and then utilise the siren when a free hit occurs. Finally, all of our event staff are briefed of this risk at prematch briefings to appropriately assist fans at the ground.”

In cricket, promotions are tied to “catching sixes” – balls that leave the field of play. According to the BBC, New Zealand Cricket and “a brewery sponsor are offering $50,000 to any fan who catches a six one-handed while wearing a promotional T-shirt.” Although there have been calls for protective netting at cricket grounds, the movement has not gained much traction.

After an injury, fans can face difficulty trying to recover financial damages. Teams across the world are protected from injury lawsuits by a waiver usually printed on the back of the ticket. Fans assume all risk for any injury they may incur once they enter a stadium or arena.

This precedent dates to 1913 and the “Baseball Rule.” In Crane v. Kansas City Baseball & Exhibition Co., S.J. Crane was injured by a foul ball at a Kansas City Blues game. The court granted summary judgment in favor of the team for three reasons. One, foul balls are fundamentally part of baseball. Two, being struck by a foul ball is a well-known risk of attending a baseball game. And, finally, Crane chose to sit in unprotected seats.

According to the Boston Globe, the “Baseball Rule states that stadium owners and operators are not responsible for injuries sustained by foul balls or pieces of shattered bats, so long as netted or screened seats are in place for a reasonable number of spectators. The onus is on the fans to be alert during the game.”

The ruling is still upheld today, so owners and teams cannot be held liable for fan injuries during a game. Legal suits rarely result in monetary gains for those who are injured. Although the 106-year-old legal doctrine has come under increasing criticism, fans must remain vigilant and rely on safety measures each team has in place.