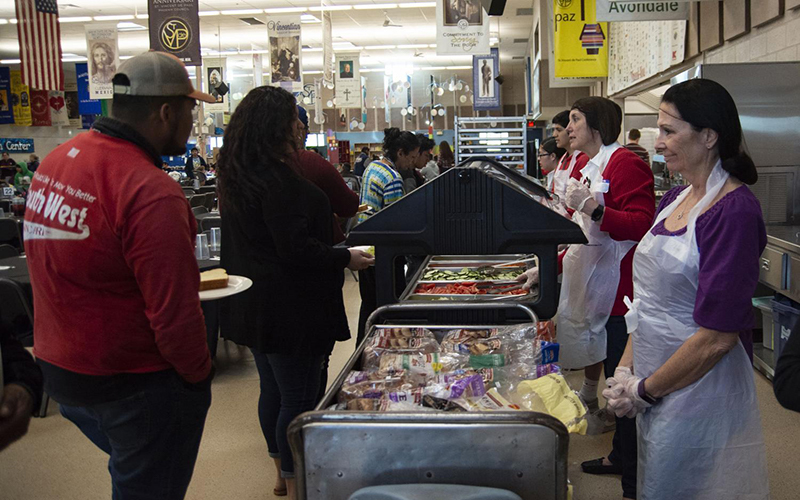 A decade after the Great Recession, many Phoenix residents still rely on free meals from St. Vincent de Paul. As the area’s housing shortage worsens, the organization says more of the families who show up in its Phoenix dining rooms are homeless. (Photo by Katherine Davis-Young/KJZZ) 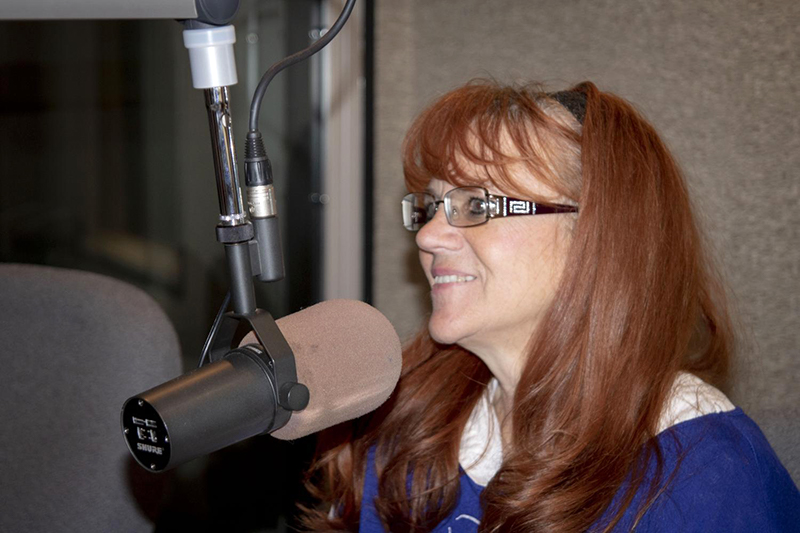 Low income should be considered a “protected class” when monitoring housing discrimination, just as sex, race and religion are, says Cheri Horbacz with the Southwest Fair Housing Council. (Photo by Katherine Davis-Young/KJZZ)

PHOENIX – Housing is considered “affordable” if it costs no more than 30% of your income. But as rents rise, affordable housing is out of reach for more and more Arizonans, and the support systems to help low-income people afford housing may not be working as they’re intended to.

The median household income in Phoenix is lower than the national average, according to census data. Incomes here are lower than they are in many other large cities, including Boston, Baltimore, Denver, Dallas and Atlanta.

But construction screeched to a halt in Maricopa County during the Great Recession, and now there’s not enough housing for our quickly growing population, so rents are rising twice as fast as the national average.

Phoenix historian and journalist Jon Talton said rent prices here aren’t that high compared with other parts of the country, but considering what people in Arizona actually earn, they’re way out of proportion.

“It’s not a lack of jobs, but it is a lack of well-paying jobs that causes affordability problems,” Talton said. “The problem is … Phoenix is based on a low-wage economy. If your pay is low, rent that somebody from Seattle would say, ‘Oh my gosh, that’s so affordable’ is not going to be affordable because you’re not making that much money.”

So now hundreds of thousands of low-income families in Arizona are struggling to pay rent.

Safety nets available to help people afford decent housing include the Section 8 housing choice vouchers, programs for military veterans, for people with disabilities and for seniors. About 45,000 households in Arizona receive some form of federal housing assistance.

But demand is increasing, and there are long waiting lists to get a Section 8 voucher. The nonpartisan research group Center on Budget and Policy Priorities estimates that for every household in Arizona receiving housing assistance, there are five more that need it. And for those that do receive assistance, the programs can be difficult to use.

Chanel Sinclair, a single mom in Glendale, has a Section 8 voucher to help cover her rent. Like the majority of people receiving assistance, she has a job, working full time as a teacher’s aide at a school for kids with special needs. But rent prices still were out of reach for her.

If you have a Section 8 voucher, you pay 30% of your income toward rent, and this federal program covers the remainder, up to a certain amount. A family of four with an annual income of about $33,000 can qualify for a Section 8 voucher in Phoenix.

But having a voucher doesn’t guarantee housing. Voucher-holders like Sinclair often have trouble finding a landlord who will rent to them.

Landlords want to be sure they’re going to get paid. And when it comes to accepting Section 8 vouchers, as with all things government, there is a certain amount of bureaucracy and red tape involved. But Cheri Horbacz with the Southwest Fair Housing Council said a lot of landlords make the decision about whether or not to accept housing vouchers based on stigmas and stereotypes.

“Sometimes the landlord may have a negative sense of that population, meaning that they cause more damage and maybe they’re not the greatest tenant,” she said. “But we implore them to look at a case-by-case basis and not necessarily look at just because it’s a housing choice voucher.”

Race, sex, religion and nationality are “protected classes.” If you’re a landlord in Arizona you can’t deny someone a home just because she uses a wheelchair or because she’s Jewish, or a mother, but it’s perfectly legal to turn her away because she’s poor.

“That’s a real scare at this point, because we don’t have enough housing providers that will step forward and say, ‘Yes, I’ll take the housing choice voucher,'” Horbacz said.

Ten states, Washington, D.C., and dozens of U.S. cities have made source of income a protected class, meaning you can’t deny someone a home just for having a Section 8 voucher. So far, however, no Arizona cities have followed suit, nor has the state.

That lack of protection is one of the reasons it’s so hard for low-income people in Arizona to take advantage of this program that’s meant to help them. And if voucher-holders can’t find a place to live within a short time frame, their voucher can expire.

We spoke to Kenya Williams at a St. Vincent De Paul dining room in Phoenix with her kids. Williams says she waited years on a waitlist to get a Section 8 voucher.

“When I did get my voucher to renew – you have to renew every year – there was nothing available,” she recalled. “So I ended up homeless for three months till I found a place with kids. My kids stayed with a friend of theirs at school, and me and my oldest daughter, we stayed with some relatives. It took us three months to find a place.”

Wages aren’t keeping up with housing costs, so demand for assistance programs is growing. But in Arizona, we still have no real incentives for landlords to participate. For Williams and her family, the consequence was homelessness, as more Arizonans struggle to afford housing, what will the outcome be?

This story was adapted from our original podcast series (Un)Affordable. now available on Apple podcasts, Spotify, NPR One or wherever you get your podcasts.